It’s all happening at the zoo 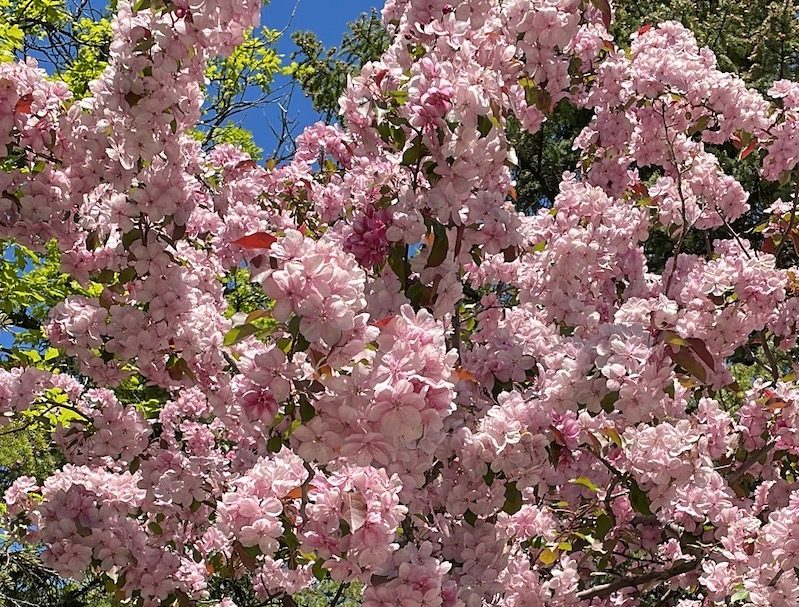 It was a peculiar day at the zoo this past June 6th.  Usually my focus has been on the fauna, but this day very few were in evidence.  A lone polar bear rolled and lolled around in the compound pond and the donkeys munched away on their hay.  No tiger,  snow leopard, or wolf were to be seen.  Petulantly I decided not to visit the camels, Takins, or Gibbons. 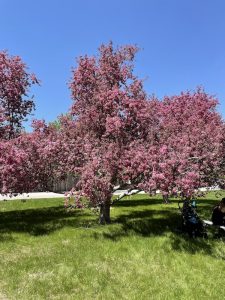 But so spectacular in its presence was what through most of my previous times in the zoo mostly unnoted–theflora.  The trees on this day displayed their exceptional spring beauty.  I’ve always loved the ‘trembling aspen’ whose leaves flutter noisily in the slightest breeze.  My handy iPhone app, PictureThis, names it the ‘Quaking aspen’ or in Latin, Populus tremuloides’.

Absolutely magnificent were the rose Asiatic apple trees, sometimes called Chinese flowering apple, a hardy species of crabapple tree, easy to care for and able to thrive even through Winnipeg winters.  Apparently its fruit has a sweet/sour flavour.  It has been a popular tree in China for centuries. Its fruit is a friend to many birds too!

The Japanese Cherry was wonderfully in bloom with its pink splendour.  Its claim to fame is that its fragrant flowers are a powerful attraction for butterflies.  I read that in Japan many love to picnic beneath its snowy pink and white blossoms in a tradition called “Hanami” and the blossoms are considered the symbol of beauty and mortality!

A great contrast in white were the European bird cherry blossoms.  This tree is considered by many an easy perennial tree to take care of whose flowers and leaves are beautiful.  But some consider the bird cherry an invasive ornamental tree.  Nevertheless it attracts bees and birds with its heavily scented clustered blossoms. 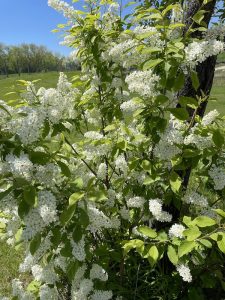 ornamental gardens, but it can be used as a bonsai tree!

While the zoo animals failed to attract my attention this day,  how enjoyable to view the vast array of colour in the zoo compound and then, with the aid of my phone app, to specifically identify its source!   What a pleasure to identify creatures I have overlooked in all my previous visits!  It was a blessing that the other usually more vital creatures tended to be invisible on June 6th !