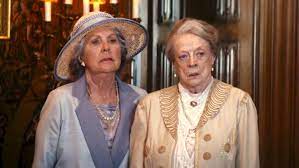 As igNation readers may remember, Julian Fellowes’ Downton Abbey is a favorite of mine.  His second film, Downton Abbey: A New Era, added to my appreciation.  The main characters of the series return in full force and true character.  Several new faces also add a new dimension to life at the Abbey.  There are two parallel plots: one takes place at Downton and focuses on the making of a silent movie that turns into a talkie to the benefit of many of the Downton folk and to the roof of the aging building; the other takes place on the French Riviera in a chateau that the Dowager Countess of Grantham has inherited from a long ago admirer.

The two subplots intermingle and enhance each other with the Dowager Countess much in the spotlight as she lives in retirement at Downton with her lady’s maid, Denker.  In the process, however, new faces and talents are revealed and old mysteries solved and resolved.

In a promising fashion the movie begins during the first credits with a wedding, and ends before the final credits with a funeral procession that perhaps marks the end of an era.  In between, the Downton folk show off both their virtues and foibles. The children of the clan have a greater role to play in this film, and in a way do point to the future.

I found the film both entertaining and at times very moving.  Much has changed for Downton since the beginning of the series in 1912, and this movie involves many changes that suggest either a broadening of the Downton world, or totally new worlds that the young folk will share. Perhaps Fellowes will give us a glimpse of that new world.