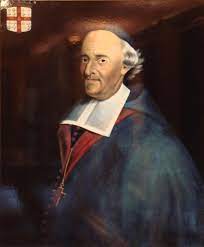 The Church in North America owes gratitude to the men and women upon whom she is founded. One of the names always included in the story of the growth of the Church in this part of the world is Bishop François-Xavier de Montmorency-Laval. He lived from 30 April 1623 to 6 May 1708 and was beatified by Saint John Paul II in June 1980 and canonized by Pope Francis on April 3, 2014.

Saint François de Laval is the first bishop of the Archdiocese of Québec. The area in which he served was the oldest Roman Catholic see in the New World north of Mexico. He oversaw an area that in the 1600s comprised much of New France. The Church has grown and changed over the centuries and today the area comprises about a hundred dioceses.

Laval was born at Montigny-sur-Avre, France, in April 1623. Both sides of his family were distinguished, and he faced pressures around the family estate, but held fast to his vocation. He studied at the Jesuit college at La Flèche and then in Paris.

It was evident from early in his life that Laval was destined for missionary work. After some political skirmishes involving control of the Church in New France, Laval was appointed bishop when he was 36 years old.

His appointment was to the advantage of the Jesuits in New France, who wanted to preserve their independence. More significantly, it paved the way to the formation of a local Church, especially since the other option for bishop was a candidate who would have ensured that the Church in New France continue to be controlled by France.

Having the leaders of the colony recognize his authority was an early priority for Laval. This happened with relative ease, since King Louis XIV of France wrote a letter to the governor of New France, ordering that Laval’s appointment be seen as legitimate. With his authority recognized, it was much easier to start structuring and organizing the Church.

Although the population of New France was small, Laval saw great hope for the future. He started with the founding of the Seminary of Québec in 1663, a move that ensured more local clergy for the Church of New France.

Next followed a society of diocesan priests. Laval also established associations, a minor seminary, schools, parishes, charitable works, and organized pastoral visitations to the parishes. He was filled with apostolic zeal.

One of the early Jesuits wrote of how Laval’s fatherly kindness sustained the missionaries: “His heart is always with us.” By educating priests locally, by establishing churches and schools, and by ensuring rotation of parish appointments, Laval created a strong local infrastructure that was no longer dependent on Paris.

The Canadian Encyclopedia says that Laval’s seminary for colonial priests facilitated the Canadianization of the clergy. His first biographer, Bertrand de la Tour, stresses that Laval wanted “the whole clergy to form but a large family.” He was a spiritual man for whom self-denial, poverty and humility were important qualities.

Laval was determined and inflexible, especially when he disagreed with the governors of the colony over moral and religious matters, or matters dealing with the authority that he had been granted by the king in France. However, he was willing to compromise on some areas. In the end, despite pursuing legal, moral and spiritual avenues, his attempts to bring an end to the greediness of the white traders were unsuccessful.

Laval served as Bishop of Québec from 1658 and a successor was consecrated in 1688. He lived for another twenty years. These were difficult years of watching his successor undo much of the work that had taken so much energy.

He often helped with episcopal functions, especially when his successor was away from New France. When Laval died in 1708, one of his contemporaries described him as “a shepherd filled with the spirit of the apostles.” Because of his pivotal role in the establishment of the Catholic Church in New France, Bishop François de Laval is seen as one of the most influential men of the period in which he lived.

The Seminary of Québec eventually became Laval University, named in honour of Bishop Laval. The University is the oldest centre of education in Canada and one of the country’s top universities. Thus, it is a fitting tribute to a man who was so instrumental in organizing the educational system in New France.