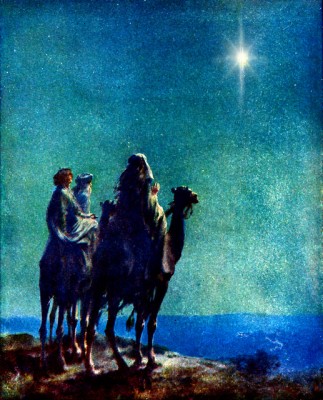 The word trailblazer immediately conjures up images of people who are admired for their vision, courage, and determination to reach their goal. Among a long list is Amelia Earhart, the first female aviator who flew solo across the Atlantic Ocean. Then there is Jane Goodall, an English primatologist and anthropologist, who is considered the world’s expert on chimpanzees.

Reflecting on the Old Testament’s trailblazers, Ruth shines forth as one who left her people to follow Naomi to Bethlehem, and faced trials with great calm.

Undoubtedly, the Magi in Matthew’s Gospel can be considered the New Testament trailblazers. They followed a star in search of the Christ Child, and at the end of their very long journey, they discovered God. These “wise men from the East” occupy just 12 verses in Matthew’s Gospel, yet they are a vital part of every Nativity scene.

As a child, I fondly remember helping to set up the crib at the entrance of our home before Christmas. The three “kings” were placed at a distance, and inched forward as the Christmas season rolled along, till the feast of the Epiphany, January 6th.

Later on, I discovered that nowhere in Scripture does it say that the magi were kings. Perhaps that came about because of Christians reflecting on Psalm 72: 10-11 “The king of Tarshish and the Isles shall offer gifts; the kings of Arabia and Seba shall bring tribute. All kings shall pay him homage, all nations shall serve him.” Or maybe the Christmas carol that we sing with great gusto, We Three Kings of Orient Are, has influenced our thinking. The gifts they brought, gold, frankincense, and myrrh were after all, fit to honor a king.

The magi, astrologers, part of a star gazing culture in Babylon/Persia were dedicated to discern the will of God. They captured the imagination of T.S. Eliot, who in his three-stanza poem “The Journey of the Magi” vividly describes the difficult path they traveled to encounter the Christ child – freezing weather, limited food and shelter, rejection from every town, and suffering camels. To them, “this was all folly.” Their meeting was just “satisfactory,” but it was only on their return, that they discovered that they were “no longer at ease.” They had changed, because they had seen the true God.

We are spiritual seekers, and God can be found by those who search for him. The magi, magoi an ancient Greek word, were pilgrim non-Jewish believers, “the first fruit of the Gentiles” according to St. Augustine. Artists, way back at the beginning of the second century, already depicted the adoration of the magi in the Roman catacombs. Christmas cards often have pictures of the magi sitting on camels, walking through desert landscape, but always following a star. The three mysterious figures are in a sense, role models for our own inner journey to God.

God’s guidance, that’s what the magi needed. Their quest led them to King Herod in Jerusalem enquiring, “Where is the new born king of the Jews? We observed his star at its rising and have come to pay him homage.” (Matthew 2:2) Interestingly, once these astrologers received Israelite revelation, that the Messiah was to be born in Bethlehem of Judea, they met him “in straw poverty,” as Bishop Barron said.

These wise men are to be admired, because they began a journey that took them over rugged terrain, yet they persevered on their adventure into the unknown. The puzzling star beckoned, and they followed. Their example challenges us to get out of our comfort zone, and be willing to answer God’s call wherever that may lead us.

When the magi discovered the Messiah, they dropped to their knees in adoration. Unlike the simple, humble shepherds of Luke’s Gospel, these were learned men whose joy overflowed, when recognizing God in the tiny baby lying in a manger. St. Bernard of Clairvaux says it best, “They fall on their faces, they revere him as king, they worship him as God. He who led them has instructed them too. He who urged them on by means of the star has himself taught them in their inmost heart.”

How amazing it is, that the magi depicted in art as dressed in Persian fashion – caps, trousers, and belted tunics with long sleeves, blazed a trail to Jesus, the light of the world.

So, we sing with enthusiasm, “O star of wonder, star of night,

Guide us to the perfect Light.”