Remembrances of Things Past( (We Hope) 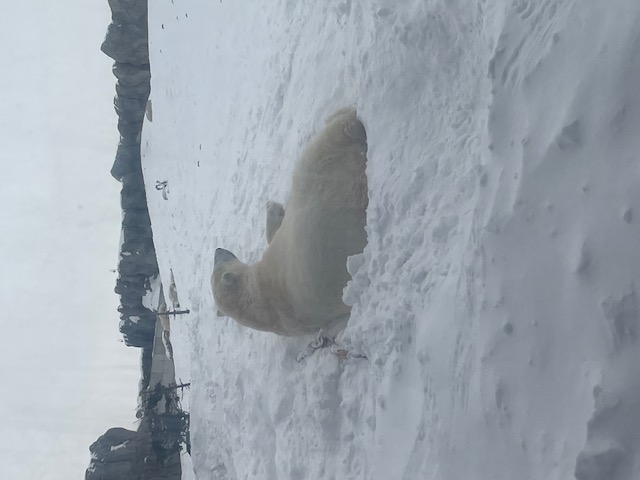 “Someone told me it’s all happening at the Zoo.  I do believe it.  I do believe it’s true.Assiniboine Park Zoo, Winnipeg, March 14, 2022 – Remembrance of things past (I hope)The overcast day is a absolutely calm.  The temperature is really -8 C!  Not a thawing day, but perfect for a walk in the Zoo.   The few cars in the lot promise minimal company on my route.

Given the many still present mounds of snow, I choose ‘white’ to be the theme for today’s jaunt. No cooperation from the ‘sacred’ bison though.  The brown herd is close to the viewing platform.  The ‘white one’ has positioned himself in the farthest distant corner, hardly visible.  Not a good start.

Snowy Owls never disappoint.  Perched high in the tree and in the snow, no peep from them!  With a silent twist of the head eyes and beak momentarily appear and disappear. 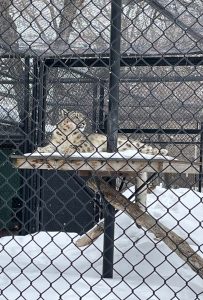 The Arctic fox is just a small lump of white fur in the snow, no tail or ears discernable.   One Polar bear rouses from sleep briefly lifting a head in greeting.  Another is carelessly sprawled out in the snow looking like dead!

Although it not quite white, a snowy leopard, ensconced on an elevated platform, stares into the distance clearly ruling his small domain.  In a separate compound another leopard paces, totally ignoring me standing on the snow bank just a few feet away.

Snowy leopards are considered to be in the vulnerable category though its numbers seem impossible to calculate because of its high altitude habitat and elusiveness.  Home for these cats is the hostile regions of the Himalayan mountains spanning twelve Asian countries.  I

ts ‘camouflage’ coat provides almost invisibility. The leopard is sometimes referred to as the “ghost of the mountains” This powerful cat easily scales steep mountain slopes and can leap six times the length of its body.

ts beautiful long tail helps provide balance, assists agility, and wrapped around it, protects it from the cold.  It is top predator of sheep, ibex, marmots, pikas, and hares.  Hunted for its coat and sometimes forced from some its habitat by mining, the cats only predators are human. frank

Internet sources report that the cats welfare may be an important indicator of the impact of climate change on our mountain environments, claiming that if the snow leopards survive, so will many other species and especially the largest freshwater reservoirs of the planet.

I am told that the magnificent cat pacing before me was ‘king of the mountains for ‘millennia’.  As I complete my ‘walk’, catching a glimpse of the tiger hiding in a shelter and noticing the batch of four Bactrian camels, I head back to the parking lot reflecting that while I found this year’s long and very cold Winnipeg winter tedious and sometimes uncomfortable, these marvellous cats probably relished it.