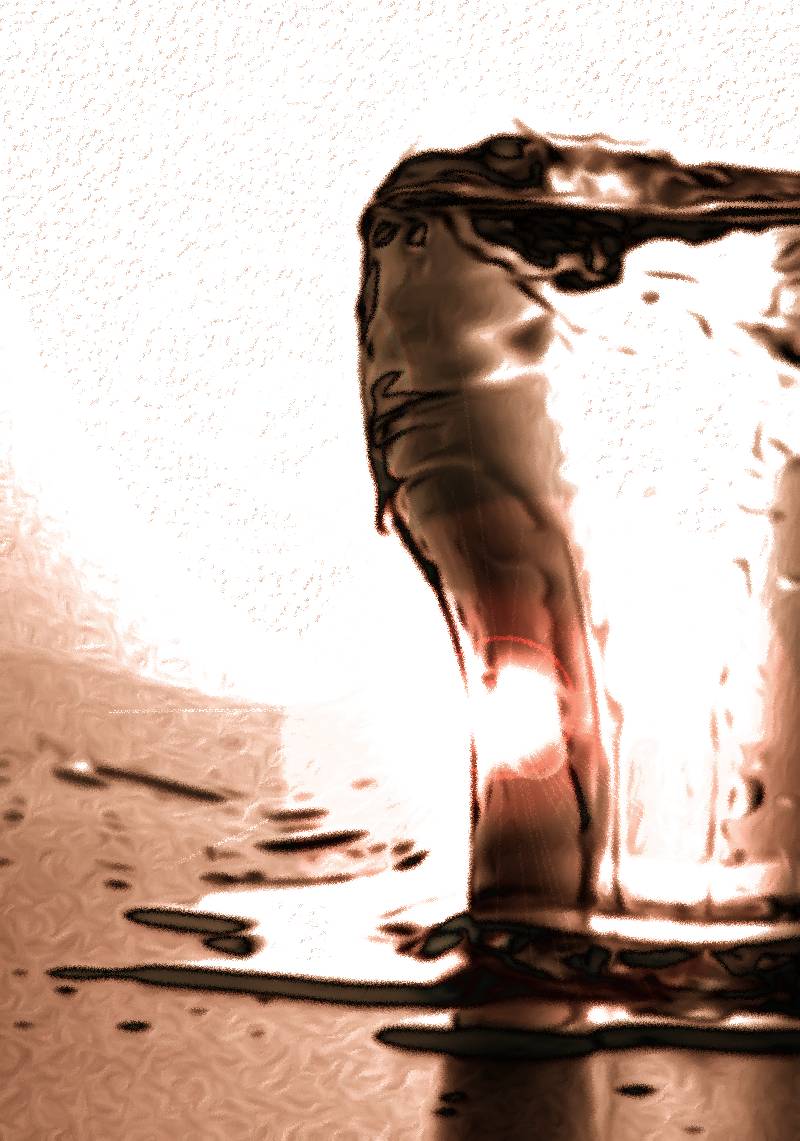 Amalia Rudolfina Tregalina was swaying around outside the grocery store on a sunny afternoon the day before Canada Day. Maybe she wss drunk, maybe she was simply free to be the girl who was still caught inside her middle aged body. First, she mumbled about wanting change. Then she was specific.

“No, I want macaroni and cheese and…some ground beef.” She spoke with the kind of rhythm that deaf people do, swallowing words, rounding them off. I had to stay close to make sense of what she was saying. She brought out the mother in me. The person buried under my cleverness. I know the empty pleasures of things like macaroni and cheese, so I suggested a sandwich. Amalia agreed, laughing, bowing her head. Then she vented a little bit of childlike frustration. “I want to cook! Macaroni and cheese…” Her eyes welled up with tears; they fell out like blobs of plastic onto her dry, scaly face. I waited. “Okay, a sandwich,” she said, pulling up her tattered polyester leggings.

nside the store, I scoped out the deli offerings. There were almost-expired heroes, submarine concoctions that were paired with pop as some kind of “lunch special.” I knew I couldn’t force my idea of health on her, but I didn’t want to give her the kind of crap that her drinking was making her crave. The obese counter attendant, a new arrival from some East Asian country, was confused when I asked for a fresh sandwich; she had to ask her supervisor—another obese woman—who told me that since tomorrow was Canada Day, they only had what was on the shelf.

Quietly, I persisted: “Could you make me some fresh sandwiches?” I waited.  The boss lady instructed her colleague to make me something with whatever was available. I asked for a cup of water too, hoping Amalia would drink it before eating her sandwiches. Part of me felt criminal for deciding what Amalia should have—that was the too politically correct part of me. The mother in me really wanted what would be the best thing for her, given the circumstances.

When I finally came out with the sandwiches, Amalia was roaming around the parking lot. I called out to her and she ambled back towards me. I handed her the cup of water, suggested she have a sip.

“No!” she said, then burst out laughing and had a little gulp. She put the cup on the ground. She snatched the sandwiches out of my hand and was about to walk away.

“You’re better than that, Amalia,” I said. “Pick up the water.”
She turned around. She picked up the water. We walked home to her apartment together. She said she likes to cook. She told me she had arrived recently from Labrador.

When I asked why, she said: “My daughter wants me here.” Every few steps she stopped to pull up her tights. Several times she was going to leave the cup of water on the ground—she wouldn’t drink from it.

“You’re better than that, Amalia,” I repeated. She thought it was laugh-out-loud funny that I am a vegetarian. She said she had once met someone from Pennsylvania who was also a “no-meat eater.”

“I’ll walk you home,” I had said outside the supermarket, because I wanted to make sure she really had a home. I had fallen in love with her dark brown eyes, her mucus-covered face, her Jean Seberg-style pixie haircut. She said she’d had it cut sometime in April. I said it was very becoming. As we got close to her house, some tattooed youths with bleached hair greeted her. Other neighbors nodded at her.

I felt such relief that she had a posse of people who knew her. I felt like a mother watching her child go off into an uncertain world. I also wondered if I had behaved in a truly generous way. Should I have just given her change and a box of macaroni?

As we got to her door, Amalia set the cup of water down again, pulled up her leggings one more time, then turned to go inside. She turned back, looking longingly at the door to the bar next door.

“Pick up that water, Amalia, you’re better than that,” I said for the last time.

Amalia turned towards me again, opened up her arms. She hugged me.

You have a friend now; an Inuit friend from Labrador.” She smiled. She was beaming. She picked up the cup of water.  I watched her go inside.

Standing just inside her doorway she said, “Goodbye, my friend.”