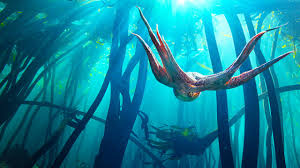 This underwater story was filmed in False Bay near Cape Town, South Africa.  It is a very simple story: Craig Foster, a middle-aged photographer exhausted by his work filming the minute details of tracking wild animals in Africa, recovers at home by exploring the underwater kelp forest of False Bay.

His filming is extraordinarily detailed in exploring the beautiful kelp forest and its denizens.  This in itself makes the film award-winning.  During his deep-water dives, however, he is intrigued by the adventures of a small octopus. Patiently, he forms a mutual relationship with her.

The relationship develops over the course of a year of filming, and the effect that it has on Foster is extraordinary.  He is intrigued by the behaviour of an octopus – her interest in him, her ability to hide from the enemy, striped pajama sharks, by covering herself with sea weed and shells, and her ingenuity in finding food and playmates.

He decides to see if he can befriend her and visits her everyday over the year of her short life.  As the octopus becomes accustomed to and accepting of his presence, she begins to welcome Foster and to share her life – her attack and injury by a shark, her recovery, her mating and reproduction of hundreds of offspring, and finally her death.

Gradually in the film the octopus allows Foster to touch her, and finally we witness her giving him a friendly, if somewhat cumbersome hug. This relationship in itself is intriguingly beautiful, but the effect that it has on Foster is even more so.  We see him gradually changing from a withdrawn husband and father who wonders about his future, to an energetic deep-sea explorer and committed parent and spouse who shares his new life adventures with his wife and son.

These days we are frequently reminded about our task of responsible care for the world.  The octopus teacher in turn reminds us of the world’s extraordinary care for us humans.