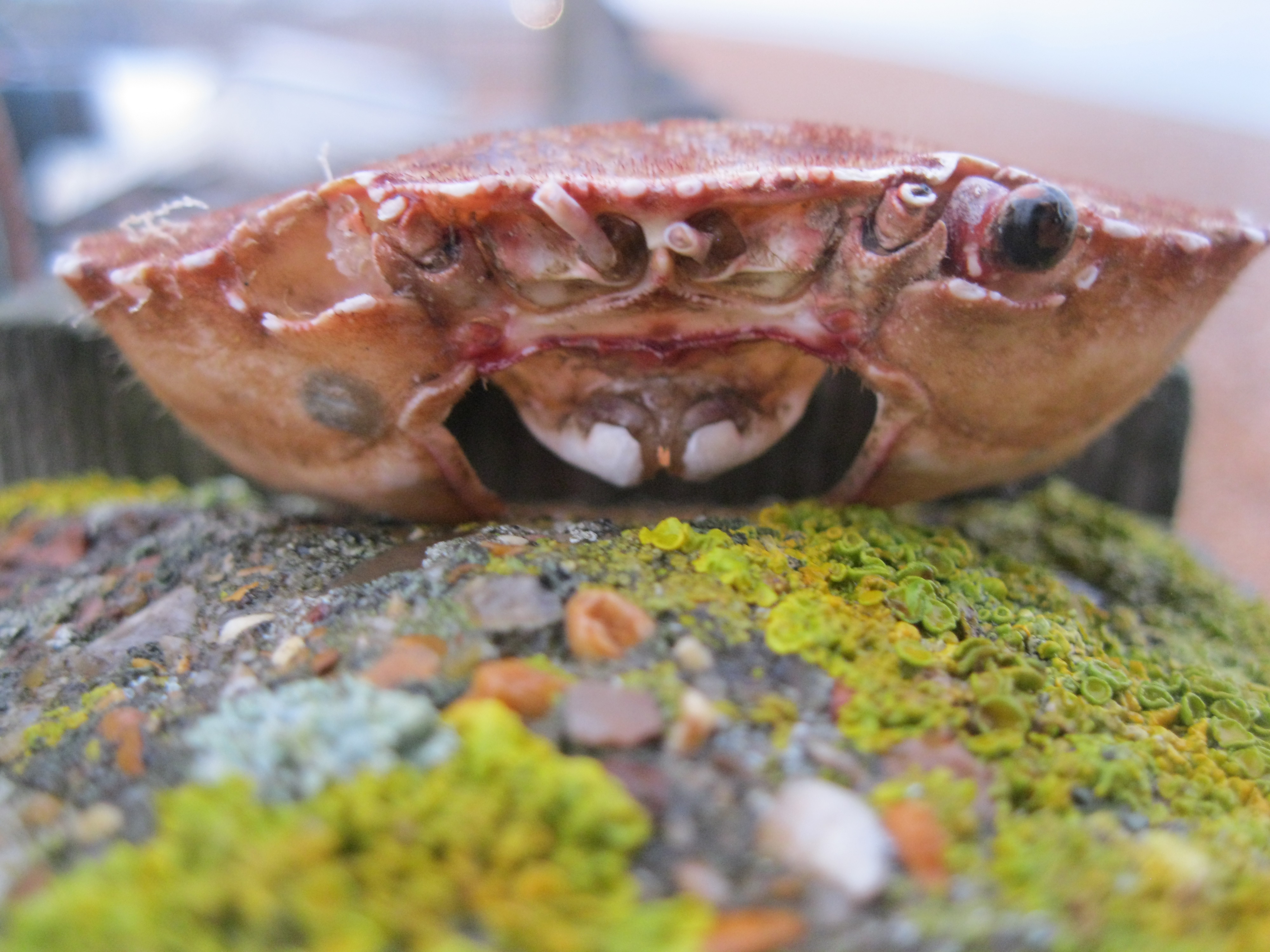 Carey the crab was enjoying her usual afternoon constitutional. “Ah, I feel much less caught up when I do this,” she murmured to herself as she scuttled along the railing of a promenade that overlooked a stormy intracoastal waterway. “Why don’t I do this all the time?” she wondered to herself. Just as she was making a heady circle around the balustrade, giddy with the quick sights of sky, then water, then boardwalk, she had her answer.

“Ooooh. Hello little creature!” cooed a high-pitched voice. In an instant, Carey was eyeball to eyeball with a giant annoyance. She’d miscalculated her route, or just forgotten that even in the cusp season, which she knew was quickly ending, there were still giant annoyances wandering around the area. It was awful in the busy season. Then they were all over the place disturbing the peace. “If only they knew enough to be quiet and move gently,” she thought as she shuddered in the vibrations of her torturer’s reedy voice.

“Aren’t you the cutest little crab I’ve ever seen!” The giant annoyance was intent on cornering Carey. Each time the little crab moved out of her sightline, the squealing monstrosity shifted to find her again. “Okay, okay,” Carey said as she submitted to the game.

In a flash she was making high-speed revolutions around the handrail. “If I had wanted to join the circus, I’d have settled near Sarasota and the Ringling Brothers Circus School,” she thought as she let herself get dizzy.

“Oooooooh, look at you circling and circling! What a clever little crab you are,” the giant yelped.

Then Carey saw her opening. The giant moved to block her progress, to delay her again, but Carey swerved in the opposite direction and let herself fall onto the boardwalk. Without a moment’s pause, she was safely underneath the slats. Panting a bit after all her efforts, Carey looked down at the calming ripples of the water below her. “Harold!” she called out, for there was her old friend the striped, silver fish who always pretended not to hear her but who was actually very fond of Carey.

He wished she had chosen another name for him, but to engage with her and tell her would mean he’d have to acknowledge that he knew her. Harold preferred to stay remote—just close enough to be a kind presence, but far enough away to never have to have a conversation with the crab.

“That crab isn’t so bad,” Harold’s friend Ida the hermit crab often said. Ida was a marvel. She hardly showed anything of herself because of the huge home she had chosen to inhabit. It was a formidable Cowie shell that giant annoyances often coveted, but Ida stayed far out enough in the muddy, slimy parts of the inlet so as to prevent any one of them from forcing her to evacuate. “That little crab just needs to find herself a good home,” Ida continued. Harold felt a little twinge of fear. If the crab found a suitable home, he might never be able to spend any more time with her—just being nearby…

Carey the crab wasn’t even aware that she needed or could have a home other than the open road that the Indian Rocks Beach nature park was. She loved the options she was able to enjoy. The swampy roots of trees where she could linger in the hottest and most humid weather, waiting it out while she admired the lapping pools of water reflecting the sharp sun’s rays. Or in the cooler times like today, she could while away hours doing her thing on the boardwalk.

In a moment, the whole thing was over. The giant annoyance had reached under the boardwalk determined to have its way. With the end of its shoe, it had smashed Carey into slippery pieces. Bits of her fell into the water. Harold looked on in shock. He was repulsed by the tiny grey parts of his old friend that were now drifting down nearby. If he hadn’t ever wanted to get too close to her while she was alive and complaining, he sure didn’t want to incline himself towards what was left. After all, it wasn’t really her anyway. Ida sidled over, stirring up the sand, and grabbed all the pieces of Carey with her pincers. One by one she ate them.

“That is cannibalism!” Harold exclaimed, leaving his fish mouth so wide open in disbelief that several smaller fish slid in, mistaking his orifice for an enticing cave. As he realized he was swallowing them, his eyes bulged with repulsion.

Ida, savoring the miracle she believed was happening as she ate her own kind in the form of easy tidbits—little wafer-like morsels of crucified crab, reassured him. “You’ll feel better once you get used to the idea. We’re all saved by devouring each other—especially if it is done in a calm, organized fashion.”

The giant annoyance was in fact on her way to church, and perhaps the ritual she had accidentally set in motion by her terrible act had somehow created an atmospheric reminder of what she wanted to be doing in the next few hours. “Oh dear, that little detour has almost made me late for mass!” she bellowed, thinking she was all alone. Harold and Ida shivered in the thunderous sound waves the giant annoyance’s voice became.

Down the road a piece, at the local church, the giant annoyance arrived just in time to scuttle into her favorite pew. She liked being able to slide back and forth on it as she listened to the mass. When it was time to get up and go take communion, she heaved a great happy sigh and made her way towards the priest. He was wearing a silvery vestment with striking ebony lines on it.

As the annoyance opened her mouth awaiting the arrival of the communion wafer on her tongue, one of the huge chandeliers fashioned like crucifixes tumbled down on top of her. She was now a mass of parts. The whole congregation hustled over to get some. Everyone knew the building was rigged to create the kind of Eucharist that really healed, but it didn’t happen very often. Most of the time, most of the century, they had to be content with the dusty little wafer that was supposed to become the body of God. But to really have the body of one of God’s parts was an absolute delight.

“I feel much less caught up when I do this,” said the priest as he watched the congregation enjoying the ritual.