History and Religion: How Will President Trump be Remembered? 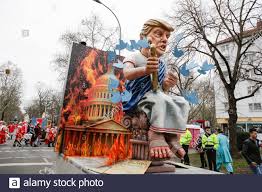 “In a secular world, which is what most of us in Europe and North America live in, history takes on the role of showing us good and evil, virtues and vices. Religion no longer plays as important a part as it once did in setting moral standards and transmitting values. History with a capital H is being called in to fill the void. It restores a sense not necessarily of a divine being but of something above and beyond human beings. It is our authority: it can vindicate us and judge us, and damn those whom oppose us.”

Let us examine MacMillan’s position by comparing the Roman emperor Nero and the  American president,  Donald  Trump through the lens of both History and Religion. Some people claim that in 64 AD Nero played the fiddle while Rome burned. Some people claim that in 2020 Trump played golf while more than 245,000 Americans (as of Nov.16,2020) died from the COVID-19 pandemic.

Roman historians either despised or praised Nero, who became Roman Emperor in 54 AD at the age of 17. Nero had his mother killed and apparently 2 of his wives. He supported athletic games and the theatre, which made him admired by the lower class.In 68 AD Nero committed suicide because of a revolt against his leadership.

Historians may have to wait some years to evaluate Trump’s one term as president. He had many critics, yet over 70 million Americans voted for him this November, a higher number than he received in 2016. What may have defeated Trump was his apparent lack of leadership to save the 245,000+ Americans who contacted COVID-19 and later died from the virus. Will Trump’s image improve if he co-operates with President-elect Joe Biden in the transition prior to Biden’s Inauguration on January 2021?

I have suggested briefly what historians said about Nero, and some of what might be said about Trump. But what have religious people said about these men?

There probably weren’t many Christians in Rome in 65 AD when large parts of the city burned. Christians were persecuted but it seems apocryphal to think they were involved in the fire. Debauchery, murder and assassination tended to be the charges levied by the church against Nero.

In spite of the present decline in attendance and faith, what have Christian and other religious people in 2020 said about Trump? Sadly, there has been no united position from the religious communities. Some religious leaders criticized Trump’s apparent lies, his attitude to women, his failure to pay taxes, his apparent racism, etc.

Many Americans are members of both the Church (religion) and the State (government). This may be one major reason for the sharp division in the USA today, and why Trump has been such a controversial president. For these reasons, at least in the USA today, Margaret MacMillan may have minimized the influence of religion.

I believe in God while also being a (retired) historian. In this context, I pray that there will soon be a vaccine to protect us from another surge of COVID-19.