The Eight Angles of The Two Popes 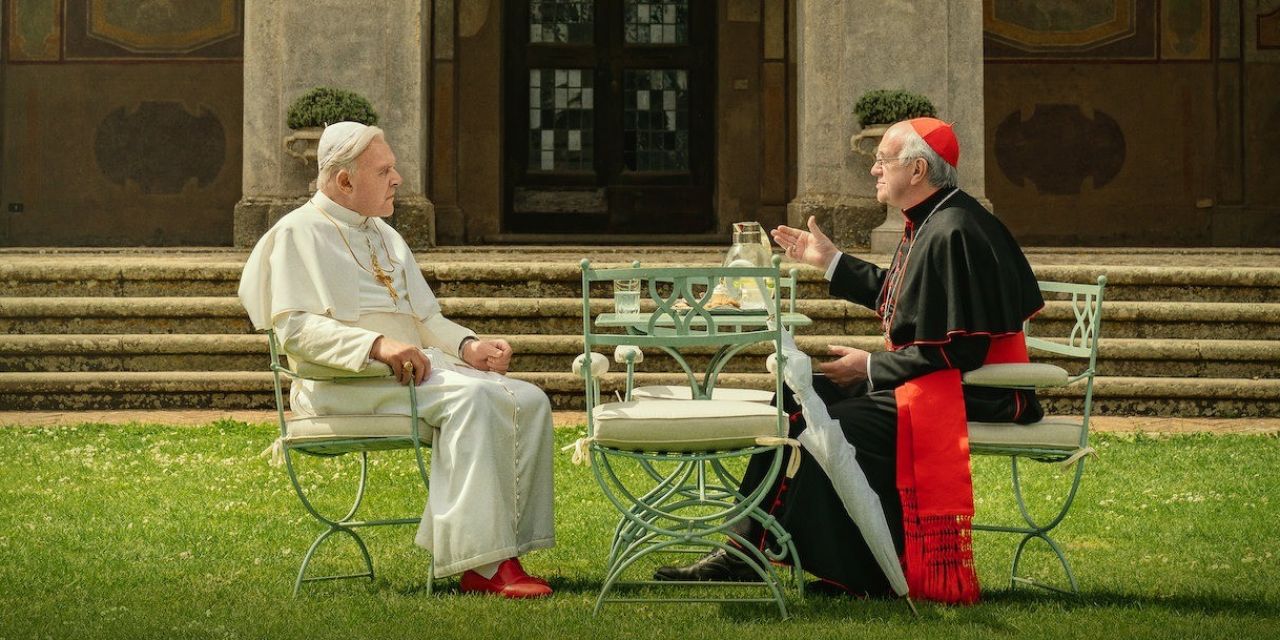 The Two Popes has two enormous advantages: the magnificent acting of Anthony Hopkins and Jonathan Pryce, and the widespread public interest since the moment in 2013 when the newly-elected affable, simply-dressed and unexpected Pope Francis greeted the crowds in St. Peter’s Square and the rest of the world on television. This pope is a world figure, not just a Church figure.

Here’s the construct: a confrontation between a progressive, man-of-the-people cardinal and a conservative, man-of-ideas pope. The first is embodied by a close-to-factual Card. Bergoglio, the second by a largely imaginary Pope Benedict XVI.

Most of this movie is about a Pope and a Cardinal. Nevertheless, the title makes sense because the obvious respect and affection between Pope Francis and Pope Emeritus Benedict XVI since 2013 might conceivably be the catalyst for the exercise: it tries to answer the question “How is it possible for these two opposites to get along???” Since his resignation, the Pope Emeritus has lived in a small renovated monastery within the Vatican grounds, and the two popes clearly get along very well.

The film is about eight films at once, by my count. Like Pope Francis’s fond image of the polyhedron (which is referred to in the film), it has many facets and can be seen legitimately from different angles. Depending on the angle of viewing, one might be completely delighted with the film; or delighted though with some misgivings (which is how I felt); or outraged.

Here’s one angle: This film is a Rorschach Test for our fractious times. What do we expect when two people with diametrically opposed views have to deal with each other? Vicious competition? Fight to the death? Or indulge in a dialogue of ideas and emotions?

The film portrays Pope Benedict and Cardinal Bergoglio as two senior leaders firmly dedicated to the same ultimate mission while holding radically contrary views of how to pursue it. But after a first skirmish that sets up the drama, they move towards a harmony of sorts, of mutual respect, appreciation and obvious friendship. Yes, says the film, amidst the ugliness of our times, civil discourse is both possible and desirable.

At this point, a spoiler alert is necessary. Reading the rest of this review might decrease the pleasure of watching the film if you have not already seen it.

OK, on with the show.

The intellectual core of the film for me is the contrast between a Church of ideas and dogma, represented by Benedict, and a Church of people, that of Francis. This is a huge divide in the Church today. Consider the rigid opposition to allowing divorced Catholics to receive Holy Communion, and the response of Francis that “Holy Communion is not a reward for the righteous but healing for those who need it.”

The action of the film unfolds over half a year. In autumn 2012, Cardinal Bergoglio petitions the Pope to let him resign. The Pope cagily refuses, suspecting that progressives will interpret such a move as an attack. Instead, he tries to understand what makes Bergoglio tick.

Their several conversations climax in an extended confession by Bergoglio to Benedict and a short one (which, intentionally, is not fully audible) of Benedict to Bergoglio.

This puts them thoroughly on the same page, so Benedict confides that he will resign and implies that he foresees leaving the papacy in Bergoglio’s good hands. All of this is fiction but it culminates in fact: the conclave in March 2013—the ritual and the Sistine Chapel setting are enjoyable highlights of the film—actually elects Bergoglio.

There are extensive flashbacks to the young Bergoglio at work and play and with a girlfriend but choosing priesthood, his very local and community-engaged style of ministry, and his excruciating difficulties during the horrible military junta in Argentina when, as head of the Jesuit Order there, he was unable to protect two radical Jesuits from capture and torture, let alone other people from ‘being disappeared.’

These dramatic flashbacks help the viewer to understand the Pope Francis of today, including some of his passionate preoccupations: mercy, the poor, the excluded, refugees and migrants. (Near the end of the film, there’s a frightening clip of the present day hazards of those crossing the Mediterranean, which I connected to the earlier portrayal of the Argentinian military murderers dumping the drugged but still living bodies of their victims from planes into the ocean.)

Francis has an automatic, authentic attachment to normal people in their normal lives and concerns, which couples with his simplicity. This is shown in the ordinary shoes and plain white vestments rather than the customary regalia when he was first elected.

All of this humanizes and explains the social Gospel that Francis emphasizes. But what about the opposing tendency? Unfortunately, the script fails to explain the attraction of and reliance on tradition and dogma, except that perhaps they have something to do with personality.

Conservatism simply likes dogma and scorns change because “change is compromise”—which ignores the fact that dogma changes and builds over time.

A fair review of The Two Popes should not only acknowledge how much of it is fiction, but also how much is significant misrepresentation and excessive speculation. For instance, the election of Cardinal Ratzinger in 2005 was not smooth, nor was it desired by him.

The difficult years for the Church while Pope John Paul II was largely incapacitated and the increasing chaos of his last years as Pope played a huge part in Benedict’s surprise resignation, rather than a (totally speculative) crisis of faith that is resolved by the (totally speculative) encounter with then Cardinal Bergoglio.

Well then: how far should fiction go in historical fiction, especially when the subjects are alive? For instance, other than hilarity, what would be the benefit of a film today about Mick Jagger as the manager-coach of Queen Elizabeth as she tries to become a rock star? Part of me regrets the amount of caricature and speculation in The Two Popes because I would prefer a film that is closer to the facts while exploring the same core ideas.

But a bigger part of me is very happy with this multifaceted film that explores issues of a Church of ideas and a Church of people (or dogma versus social gospel), and of the possibility of civil discourse in our fractured times.

This film also portrays friendship and respect in high places, it helps us get to know Pope Francis better, and it points to his priorities. It even lets us peek through the conclave keyhole and shows us various Vatican settings, rituals and habits. That’s seven angles, but I promised at least eight.

So here is one more, courtesy of my friend, helpful editor and igNation blogger extraordinaire Kevin Burns: “In essence it’s a workplace drama, it could just as well be two plumbers disagreeing with each other about a job they don’t want!’

The Two Popes is available on Netflix and Crave TV