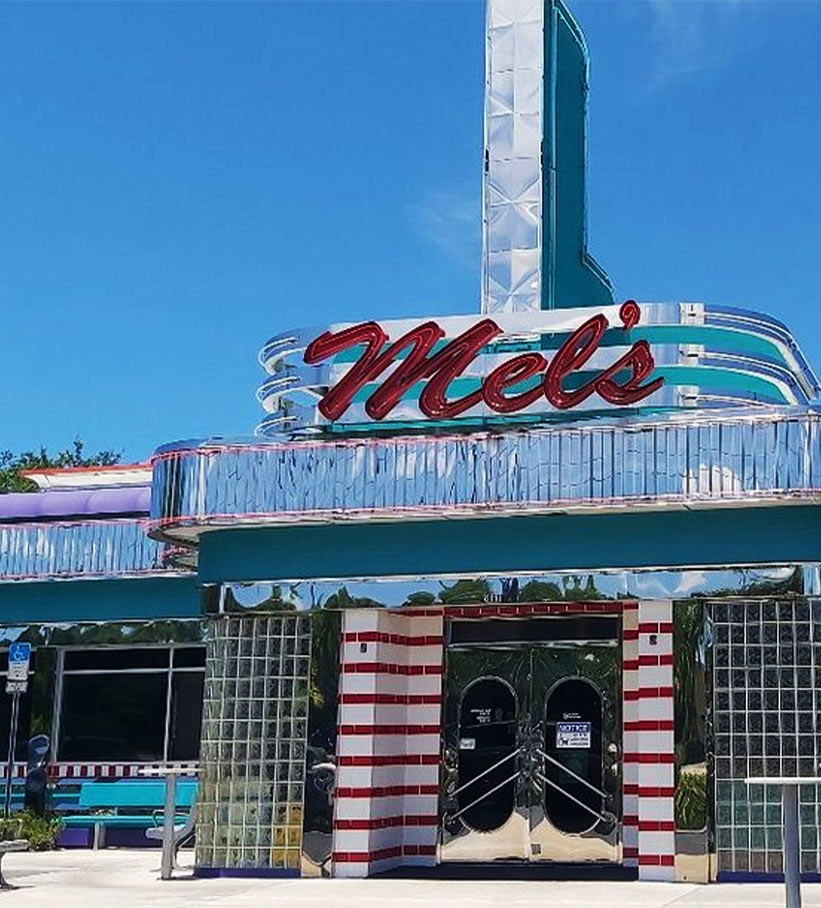 Mel’s Diner is a fifties-style restaurant in Naples, Florida. It’s always packed. Most of the time you have to wait for a table and often you can hardly find a parking spot. But no one seems to mind. Everyone says the same thing: “It’s worth the wait!” It’s ranked as the top family-style restaurant in southwest Florida.

And no wonder: the food is outstanding—crispy buttermilk biscuits are brought to the table as soon as you sit down—and that’s just for starters. An added attraction: the prices are a decade behind the times, and, true to the fifties ambience, Heartbreak Hotel, Tutti Frutti, and Peggy Sue are playing in the background. On top of that the service is exemplary: there is always someone coming around with extra refills of coffee and asking, “Is everything all right? What can we do for you?”

But there’s something else outstanding about Mel’s Diner: It has a shrine to Our Lady—in the entrance hall! You can’t miss it. And a bevy of statues and paintings of saints, the Infant of Prague and the Sacred Heart, adorn the walls of the foyer.

During the Christmas season, to no one’s surprise, you will find the biggest indoor-Nativity scene you could imagine. This Nativity scene isn’t hidden away in some dusty obscure corner. No! It is front and centre. You see it as soon as you walk in the door. This was no shrinking-violet, politically-correct Nativity scene.

It was big and bold. And the figures were almost life-size.At family-owned Mel’s Diner, they are proud to be Catholic! As the prophet Isaiah said: “Give thanks to the Lord. Acclaim his name. Let this be known throughout the world!

Being at Mel’s Diner is almost like being in Mexico: In this country there are shrines to Our Lady of Guadalupe and The Sacred Heart of Jesus everywhere—in bus stations, parks, storefronts, grocery stores, buses, taxicabs and malls. It is a commonplace occurrence to see a person kneel down in front of an altar—in a crowded bus station, of all places—make the sign of the Cross and spend a few minutes in silent prayer.

And it is not at all unusual to see pedestrians and drivers pass by a Catholic church, doff their hats and bless themselves. Right on a busy street—in front of everyone!

Beverly Donofria, author of Looking For Mary, lived in Mexico for a time and attests to this. She said that the Mexican people are not at all bashful about their faith. They proclaim it openly and vigorously. “In processions,” she says, “they love Our Lady with such passion that they will explode with loud cries, like at a soccer match, Viva La Virgen! Viva La Virgen’ “

American journalist Fulton Oursler (1893-1952) would have been pleased. He converted to the Catholic faith after spending years as an agnostic. On one occasion Fulton and his wife, Grace, were attending a party in Hollywood. Soon “a discussion degenerated into slurious references to his faith.” His reaction?

He stood up, and, speaking in a clear, decisive voice for all to hear, said: “Come, Grace, we are leaving these people since they have no respect for our faith or us.” At which point the Fultons walked out the door “amid a hush.” He was never afraid to proclaim his faith. He went on to write the acclaimed The Greatest Story Ever Told and other Christian-themed books.

St. Padre Pio (1887-1968) believed the necessity of proclaiming the gospel “from the rooftops” (Mt. 10:27). He urged his penitents to be proud of their Catholic faith. “Do not be ashamed of Christ or his doctrine!” he said.

I have no doubt whatsoever: St. Padre Pio would have loved Mel’s Diner.