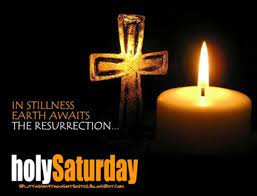 Holy Saturday, also called Easter Vigil, Christian religious observance that ends the Lenten season, falling on the day before Easter Sunday. The observance commemorates the final day of Christ’s death, which is traditionally associated with his triumphant descent into hell.

The early church celebrated the end of Lent with large baptismal ceremonies, but for many centuries no services were held on Holy Saturday in the Western churches, recalling the suspended state of Christ’s followers in the period between his Crucifixion and Resurrection. Beginning in 1955, the Roman Catholic and some other churches restored the evening Easter Vigil.

(Source : The Editors of Encyclopaedia Britannica

Today, igNation offers you the following three posts for your Holy Saturday prayer.

(1) A Great Silence on Earth

The Office of Readings for Holy Saturday includes an excerpt from an ancient homily for this day. It starts, “Something strange is happening – there is a great silence on earth today, a great silence and stillness. The whole earth keeps silence because the King is asleep. The earth trembled and is still because God has fallen asleep in the flesh and he has raised up all who have slept ever since the world began. God has died in the flesh and hell trembles with fear.”

Many of us do not know what to make of Holy Saturday, nor how to celebrate it. Do we actually celebrate? It is a day to be quiet, to wait at the tomb of Jesus. Our waiting will likely occur in the midst of the usual Saturday tasks, preparations for family or church Easter celebrations or maybe a walk.

We are at the tomb of Jesus before tonight festivities. Luke tells us, And now a member of the Council arrived, a good and upright man named Joseph [of Arimathea]. He is the one who placed Jesus in a tomb. The women followed, taking note of where the body had been laid. Matthew describes Joseph as a disciple of Jesus. John says that he was a secret disciple. Mark describes Joseph as bold in his request for the body. They all mention the women. Perhaps it becomes more important than ever for us to stay at the tomb.

The day between Good Friday and the Easter Vigil is described in the Roman Missal.

“On Holy Saturday the Church waits at the Lord’s tomb in prayer and fasting, meditating on his Passion and Death and on his Descent into Hell, and awaiting his Resurrection.

The Church abstains from the Sacrifice of the Mass, with the sacred table left bare, until after the solemn Vigil … when the time comes for paschal joys, the abundance of which overflows to occupy fifty days.”

Churches that celebrate Holy Saturday traditionally do so by observing a day of somber reflection as they contemplate the world of darkness that would exist without the hope of Christ’s resurrection. We have a world of silence (though accompanied by the usual noises), but we have hope for Christ’s resurrection and our share in its graces.

(2) A Holy Saturday Stations of the Cross

The Church was packed on Good Friday, so the elderly lady decided that she would make the Stations of the Cross – on Holy Saturday. The Our Lady of Lourdes Parish Church would be empty, except for those decorating the church for the Easter Vigil.

Taking her time, she slowly wound her way around the Stations along the aisles of the church. She then made her way to catch the bus #75. It was one that lowered its steps.

She very cautiously boarded the bus. The Driver was a kind and considerate man. Take your time, Grandmother. I am in no hurry. While still in considerable pain she fumbled in her large bag for money to pay her fare,. Do not worry, Grandmother. Just take your seat.

You see, she said, I just came from the Church making the Stations.

Pointing to her hands, I do not have nails here, but he had nails and I have peace in my heart

Pointing to her head, I do not have a crown of thorns there, but he had thorns and I have peace in my heart

Pointing to her side. I do not have a spear here, hut he had a spear and I have peace in my heart

The bus driver turned his head as his eyes were filled with tears. He waited till the elderly woman took her seat and then drove away very thoughtfully. Our world would be an awfully bleak place to live in without love. The elderly woman had experienced love – and unconsciously spread that experience.

We can do well on Holy Saturday to dwell on this awesome mystery rather than to try and keep busy in the same way as when we are in the doctor’s waiting room or in a queue at the bank on a busy day. There is the brutal and hard fact: God is dead. Jesus Christ has died on the cross. We cannot feel this loss in the same way as the Apostles did 2000 years ago. For them, it was a horrible wrench, as if a part of their very soul was taken away.

You and I know there is a Resurrection. For the Apostles there was only a hope, – a hope that was like a candle in the wind. The Disciples of Emmaus articulated their feelings in that pathetic phrase, “We had hoped.” There was no turning back the clock. They could not wave a wand and bring back their friend, Jesus.

It is important that we wait with the Apostles. The utter devastation of the loss on Good Friday will take some time to heal. The silence must be a fruitful and productive silence.  You and I know the Alleluia of Easter, but there are thousands of fellow men, women and children who live in the continual darkness of Holy Saturday. They ask: When will we reach there?