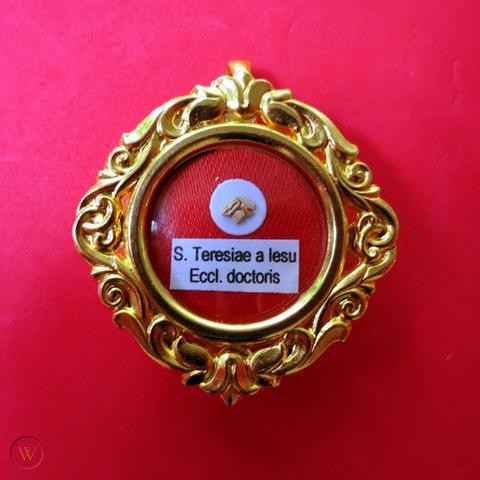 “An arm? A severed arm? In a glass case? You’ve got to be kidding!”
The young man, Brian, looked a little alarmed. Well, that may be an understatement. He looked aghast and more than a little horrified. The reactions in the class were similar. “How macabre!” “How ghoulish!” “How absurd!”

The group was an RCIA class (the Rite of Christian Initiation), a gathering of adults of varying ages who were interested in becoming Catholic. At this point in the session half of them looked like they were ready to bolt from the room and never come back!

What prompted this discussion was a comment by one of the sponsors in the group. She had just returned from a trip to Spain and had visited the Carmelite convent at Alba de Tormes, the burial place of the famous St. Teresa of Avila, the 16th century Spanish founder of the Discalced Carmelites. She spoke about viewing the reliquary containing Teresa’s left arm. At the mention of “arm” all eyes widened.

More in shock than in surprise. “Did I hear this right?” they seemed to be asking themselves.  Most of them had never heard of such a thing and thought it must be a “uniquely Catholic thing.” Actually, it’s not!

Buddhists revere relics too. They venerate the relics of Buddha (who died in 483 B.C.) at small domed shrines known as stupas or pagodas which are scattered throughout the Buddhist world. The word comes from the Latin word reliquiae which means “remains.”

For two millenia Chinese and Asian peoples have venerated the relics of Confucius, who died in 479 B.C. The veneration of relics has always been considered important by the Eastern Orthodox church as well.

In 1997, the world-wide visitation of the relics of St. Therese of Lisieux (“The Little Flower”) caused a sensation wherever they went. 1997 marked the hundred-year anniversary of the death of the famed French Carmelite (now a Doctor of the Church).

The relics (considered “first-class” relics because they contain actual fragments of the saint’s remains) travelled to 22 countries. The Montreal Gazette headlined: “Remains of Superstar Saint Expected to Draw Thousands.” It reported that her remains had been “seen by millions in the last four years.”

The reliquary (the case which contains the relics) travelled the world from Siberia to South America and visited 41 of Canada’s 63 dioceses. “Everywhere” the relics attracted “exceptional” attention. Officials were “stunned” by the crowds. At one church in  Southern California, 75,000 people came to venerate the relics. On one Saturday in Delgany, Ireland, 25,000 people came to pay their respects.

What can account for such numbers? Father Linus Ryan, the reliquary’s national tour coordinator for Ireland, said that those numbers illustrate a “deep yearning in the human heart for the transcendent, for God.” “Visiting these relics of St. Therese brings people closer to God,” he said.

We read about relics in the Bible: Six hundred years before the birth of Christ we read the story of a dead man being cast into the grave of the prophet Elisha. “When he came into contact with the bones of Elisha he came back to life and rose to his feet.” (2 Kings 13:20-21).

We find evidence of second-class relics (articles of clothing or objects used by a saint) in the New Testament as well, in Acts 19:11-12. “So extraordinary were the mighty deeds God accomplished at the hands of Paul that when face-cloths or aprons that had touched his skin were applied to the sick, their diseases left them and the evil spirits came out of them.”

The Church has venerated relics from the earliest times: We learn that after the death of St. Polycarp about the year A.D. 156, the citizens of Smyrna “took up his bones and laid them in a suitable place—and there we celebrate his martyrdom.” To this day, the custom has persisted of placing a relic of a martyr on the altar of each new church as it is being constructed.

St. Jerome, the fifth century Doctor of the Church answers detractors who speculate that Catholics “adore” relics,. He said: “We do not worship, we do not adore, for fear that we should bow down to the creature than to the Creator but we venerate the relics of the martyrs in order the better to adore Him whose martyrs they are.”

Most Canadians are familiar with Quebec’s Basilica of St. Anne de Beaupre which is dedicated to St. Anne, the mother of Mary and the grandmother of Jesus. The basilica contains a major first-class relic of St. Anne, a fragment of her wrist-bone. The relic was presented to the basilica by Pope Leo XIII in 1892. “Of all the churches dedicated to St. Anne, none can claim as many miracles as St. Anne de Beaupre” reported author Joan Carroll Cruz.

The RCIA class, once they understood the meaning of relics, became fascinated with the subject. “We need something tangible to see—to touch. To believe in,” said Richard. “And relics serve that need.” They all visited the local church where the relics of St. Therese remained for one day. They were mesmerized. “I didn’t want to leave!” said, Janice, another member of the group. “They are like a reminder of our loved ones. Only relics go one step further: They’re real. They’re more real than a photograph!” she said.