My First Communion 1950 and Easter 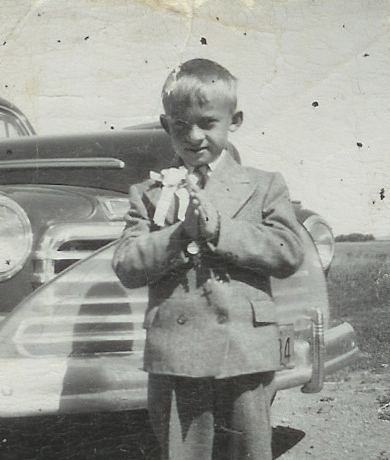 Somehow I have come to think that my First Communion happened at Easter time.  But I know that isn’t true. It was in summer, Sunday, July 16, 1950.

Each year after our June exams in our one room school house, Fairview SD #174, on Highway #16 (now #48),  my five older sisters and I attended an extra two weeks of school.

For the first two weeks of July we trekked with horse and buggy to Rastadt School in St Peter’s Colony, located about 4 miles north of Kronau, Saskatchewan.

Because the Archbishop from Regina only came to our parish for Confirmation every third year, and the age for Confirmation was 10, rarely did a child attend after being Confirmed.  Most parents considered that with Confirmation the child was ‘done’ in terms of their formal Faith education.

Although I really don’t recall anything much of those two weeks in 1950, vivid in my memory is that Sunday morning kneeling in the front right hand side pew with the other boys. (The girls were on the left side).

We boys sported a flower and ribbon on our lapels and the girls were like snow flakes, all white.  I was conscious too of my stern vigilant grandfather’s presence in his pew right behind them, not behind us.

Receiving the host on my tongue, the inevitable happened. Sister had warned us that the wafer might stick to the roof of the mouth. It did. Not quite panicking, finally producing a little saliva, I carefully managed to peel it off with my tongue and, without chewing, to swallow it.

Curiously, despite negotiating all the mechanics of physically receiving First Communion, I knew that something mysterious and holy was happening. There was no doubt in my mind that Jesus was present.

That belief was nurtured through the rest of my catechism years at the Colony, the few years of catechism correspondence with a Sister of the Missions in Regina, and the Masses and Benedictions in those early formation years of my Faith.  Of course, celebrating the Eucharist has been integral in my life since my ordination in 1972.

During the recent year of COVID streaming Masses after communion it has been a consolation to pray with those joining on-line: “I truly believe that you are truly present in the Blessed Sacrament”.

The ‘real’ Presence has been always central to my Faith.  Perhaps it is no wonder that in  my elder years I have come to associate my First Communion experience with the celebration of its institution on the Holy Thursday during the Easter Triduum.