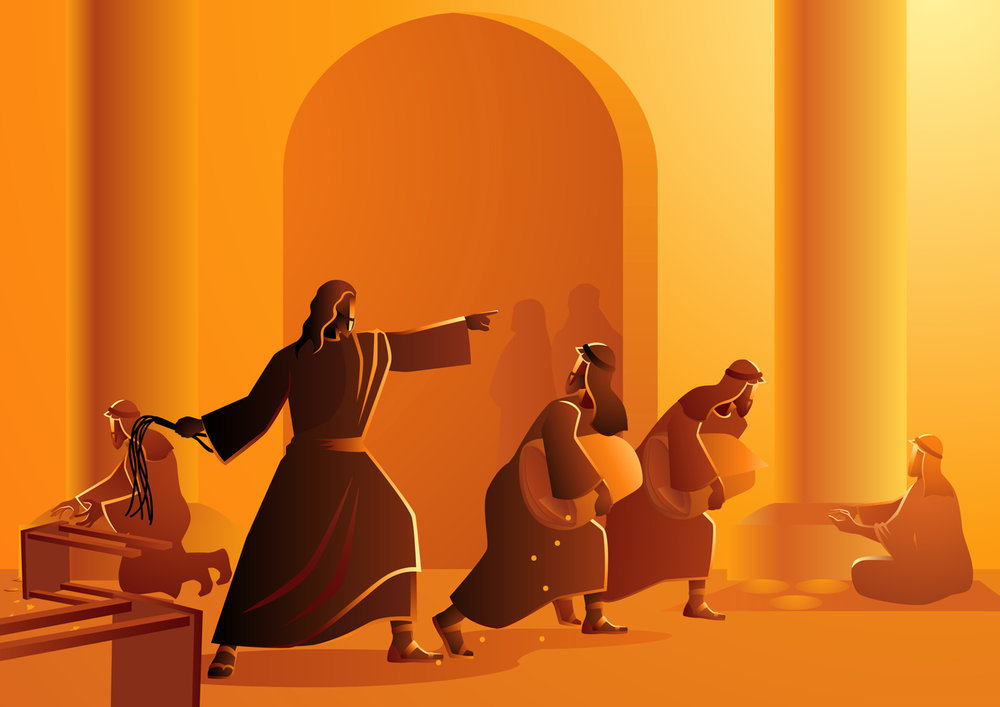 I’ve always had difficulty both praying with and preaching about today’s Gospel passage. I suppose that my default image of Jesus is found in his healings and in his words of peace, freedom and encouragement.

The scene of Jesus making a whip of cords and driving the sellers and money changers out of the temple is in sharp contrast to the usual image of Jesus. And yet, his strong statement is a significant element of his ministry. “Take these things out of here! Stop making my Father’s house a marketplace!” Do I allow myself to acknowledge the anger of Jesus?

Buying and selling are regular features of temple life. They are, likewise, regular features of our Catholic parish life. I suppose that they are a necessary evil. Selling raffle tickets will raise needed funds for the parish. It’s far easier to sit at a table in the entry to the church, rather than rely on mail or other ways of buying and selling.

So, why is Jesus seen as being in a rage? Yes, it is righteous anger. His is a righteous indignation about things that he doesn’t see as part of what should happen in the temple. Jesus was probably concerned by the lack of respect that people were showing.

The temple was a sacred place. In an analogous way, we see that certain indigenous peoples are upset when they see their sacred spaces violated by hordes of tourists. Anger such as this makes sense.

Jesus was fully human and fully divine. His human nature was manifest in a range of emotions, including anger at what bothered him. The scene we have today is not the only occasion on which he showed anger.

Another time Jesus showed anger was in the synagogue of Capernaum. When the Pharisees refused to answer Jesus’ questions, “He looked around at them in anger, deeply distressed at their stubborn hearts” (Mark 3:5).

Like Jesus, our anger is not an emotion we can avoid. The challenge is to find healthy ways of dealing with it. Jesus’ anger was not selfish or rooted in any personal slights. It had more to do with injustices.

What would provoke anger in Jesus today? I doubt that he would be enraged by the selling of religious goods at the back of the church. But, he probably would get very disturbed by hypocrisy and double standards.

I imagine that he would be enraged by seeing Christian ministers driving around in fancy vehicles and living in opulence in rectories, while parishioners are struggling to keep their children fed and clothed. Jesus would likely be in a rage over the injustice of our world, especially when it takes place in the name of religion.

I doubt that Jesus would be impressed by the political divisions in our Church. I doubt that he would be left or right. He would not be advocating division and separation. Jesus may have had his moments of anger, but they were rooted in a great concern for people.