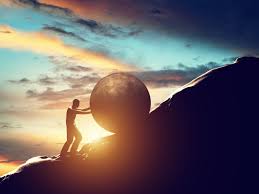 Today’s Gospel reading includes the reminder from Jesus about the gift of persistence. The hypothetical friend he describes persists, thus receiving whatever he needs. “Ask, and it will be given you; search, and you will find; knock, and the door will be opened for you.”

Persistence often works its charms, both with God and other people. Ask a cranky child. Her parents will likely give in after a brave attempt at teaching her about delayed gratification.

Persistence is also an important quality for scientists, artists, writers, athletes, and anyone with long-term goals for a project. Think of the winners of the Nobel Prize. They are recognized for the ways in which their doggedness produced results.

Back in 2015, Fast Company magazine listed the seven habits of highly persistent people.It doesn’t take much imagination to apply those habits to our prayer life or fitness goals or writing:

5: Ability to adjust and adapt

7: Role models that act as guides and mentors.

It doesn’t take much imagination to apply these habits to our prayer life or fitness goals or writing.

We see an interesting illustration of persistence in the reading from Genesis. Abraham shows persistence in his bargaining with God. Each time Abraham adjusted the number of righteous individuals in Sodom and Gomorrah, God promised to forgive the whole place for the sake of fifty, forty-five, forty, and so on.

People in need and with great desires can be persistent. God can also be persistent. Some people use the phrase the hound of heaven to describe the way in which God continues to pursue us. The phrase comes from the title of an 1893 poem by Francis Thompson.

The speaker in the poem runs from the sound of God in his life, so set is he on maintaining his dissolute patterns in life. It turns out that Thompson himself led a tortured life. After trying to pursue the priesthood and medical studies, he eventually drifted and fell into financial difficulties.

So poverty-stricken was he in London, where he was pursuing a career as a writer, that he sold matches to earn money and borrowed paper on which to write poems. His troubles increased when he developed neuralgia. To relieve the acute pain, he resorted to opium and became an addict.

“As the hound follows the hare, never ceasing in its running, ever drawing nearer in the chase, with unhurrying and imperturbed pace, so does God follow the fleeing soul by His Divine grace. And though in sin or in human love, away from God it seeks to hide itself, Divine grace follows after, unwearyingly follows ever after, till the soul feels its pressure forcing it to turn to Him alone in that never ending pursuit.”

What am I persistent about? How do I express that doggedness and determination?