St. René Goupil, a Patron Saint of the Deaf 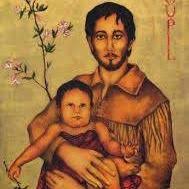 The Catholic Deaf community which makes part of the larger faith community of Holy Canadian Martyrs church in Ottawa, chose the name of St. René Goupil because this saint was actually hearing impaired.  He had been a Jesuit novice in France, but was dismissed from the Novitiate because of his hearing impairment.

The actual record says, “dismissus quia surdaster”.  The Latin word, surdaster, means hard of hearing, or hearing impaired. It does not mean deaf.  After studying medicine he volunteered for the Jesuit Missions in New France as a donné (volunteer and medical missionary) working for a while in Quebec City and then in 1642, en route with St. Isaac Jogues to the Jesuit hospital at Ste. Marie among the Hurons (present day Midland, Ontario) was captured by an Iroquois raiding canoe flotilla.

René had used his healing hands in his work but was tortured and lost several fingers and finally died a martyr after making a sign (the Sign of the Cross) over a young child while a prisoner among the Mohawks in what is today New York State.

Sensing that death was near René had begged his fellow prisoner, Fr. Isaac Jogues to take vows in the Society of Jesus before he was killed. This was granted and René did die as a Jesuit but certainly not in a black robe as frequently depicted in religious art.

Because of his hearing impairment, his devotion to the ministry of healing and finally dying as a martyr for having communicated the principal Sign of our faith, St. René is now looked on as a patron saint of the Deaf.

Peter Monty, SJ is Chaplain for the Deaf in Ottawa.