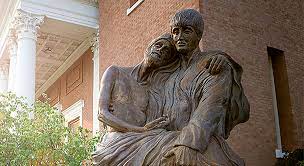 Early in the pandemic, there was a crisis at Rene Goupil House, our Jesuit Infirmary in Pickering, ON. Most of the Jesuits and some staff contracted COVID. Several Jesuits eventually died. Some of the others had to temporarily move to safer settings. Our remaining staff were overworked, and the regional health authority was trying their best to deal with the many crises in the area, including ours.

Several young Jesuits offered to come assist with basic healthcare needs, accompanying older Jesuits with walks in the sunshine, bringing meals, and so on. Some of the Pickering Jesuits saw an obvious connection with a well-loved young saint in Jesuit history.

Summer starts with St. Aloysius Gonzaga, on June 21. Born in Lombardy in 1568, Aloysius Gonzaga entered the Society of Jesus despite the protests of his powerful and wealthy family. Aloysius gave early evidence of prayer and penance.

His shift from the courtly way of life to the interior life seems to have been spurred on by the experience of malaria. He persisted in his pleas to his family, finally wearing down his father, and entered the Jesuits in 1585. His continuous mantra throughout his life was: “I am a piece of twisted iron; I entered religion to be untwisted straight.”

His desire was to go to the missions, but the plague broke out in Rome. He offered himself to serve the sick and dying in the hospital. Thus, Aloysius is a fitting saint for a COVID world. He died in Rome in 1591, while nursing people who has been stricken with the plague. He was just 23 years old. Thankfully the young Jesuits who came to the rescue for the Jesuits in Pickering were able to benefit from the best equipment and practices for their personal protection.

Aloysius is the patron of young people, especially students. High schools and Jesuit universities are named for him. (I attended both a Jesuit high school and a Jesuit university named for Aloysius.) He has also been recognized as the unofficial patron of people with AIDS, and their caregivers.

Aloysius is a collection of essays dealing with the saint. It was edited by Clifford Stevens and William Hart McNichols. Our Sunday Visitor published it in 1993. The essays cover a wide range of matters – the brief life of Aloysius, the role model offered by the Saint and his form of mysticism.

The author of the essay on Aloysius’ mysticism refers to his inner peace, the sureness of his path and the serenity that prevailed in his life.

The Saint didn’t live long enough to let go of his youthful innocence, a gift that many of us would love to return to. I like the prayer from the Roman Missal, especially with its reference to innocence: though we have failed to follow him in innocence, we may imitate him in penitence.