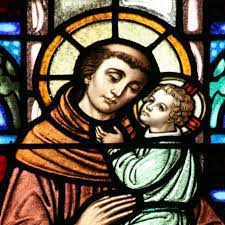 Anthony was born in 1195, to a wealthy and noble family in Lisbon, Portugal. As an adolescent, he joined the Canons Regular of Saint Augustine and received the education to be a gifted biblical scholar. He met several Franciscans nearby and was inspired to join the community, just eleven years after its founding.

Anthony was inspired by their example of a simple, evangelical lifestyle. He was also motivated by hearing the news of several Franciscans being beheaded in Morocco. He was at first sent to Morocco but became ill. He was on a ship back to Portugal, but it was pushed off course and ended up in Italy.

Anthony grew into a great reputation for preaching and teaching. He attracted large crowds. Anthony eventually came to the attention of Francis of Assisi. Francis was reluctant to allow his friars to study theology, fearing that it might be a hindrance to the life of real poverty and service. However, he recognized that Anthony shared his vision and could help provide the training required by members of the order who were moving toward ordination.

Francis sent Anthony to preach and teach fellow friars throughout northern Italy, in places such as Bologna and Padua. Thus, a man born in Portugal became associated forever with Padua.

It was in Bologna that an incident occurred that lies behind the practice of asking for his assistance in finding lost things. Anthony’s psalter went missing and he prayed in earnest for its return. It turns out that a novice who had discerned to leave the community had taken with him Anthony’s psalter, which included his notes and comments. The young man returned the book, but also returned to the community.

Anthony continued his preaching and teaching, even being invited to preach at the papal court of Pope Gregory IX. The Pope described Anthony as the Ark of the Testament.

There are legends surrounding the life of Anthony. A popular one has him standing at the edge of the shoreline to preach, after heretics had treated him with contempt. As he preached, it is said that a great crowd of fish eventually gathered.

When the townspeople marvelled at this, Anthony remarked that the fish were more receptive to his message than the heretics had been. Another legend deals with a starving mule bowing before the Eucharist instead of taking the food offered to him.

Anthony became sick at the age of 35 and died not too far from Padua, on June 13, 1231, at the Poor Clare monastery. He was so revered that he was canonized less than a year after he died, one of the most quickly canonized saints in the history of the Church.

Referring to the fact that Pope Pius XII proclaimed Anthony a Doctor of the Church, Benedict XVI said that it was because of the richness of spiritual teaching contained in his Sermons.