UNTANGLING THE KNOTS IN OUR LIVES 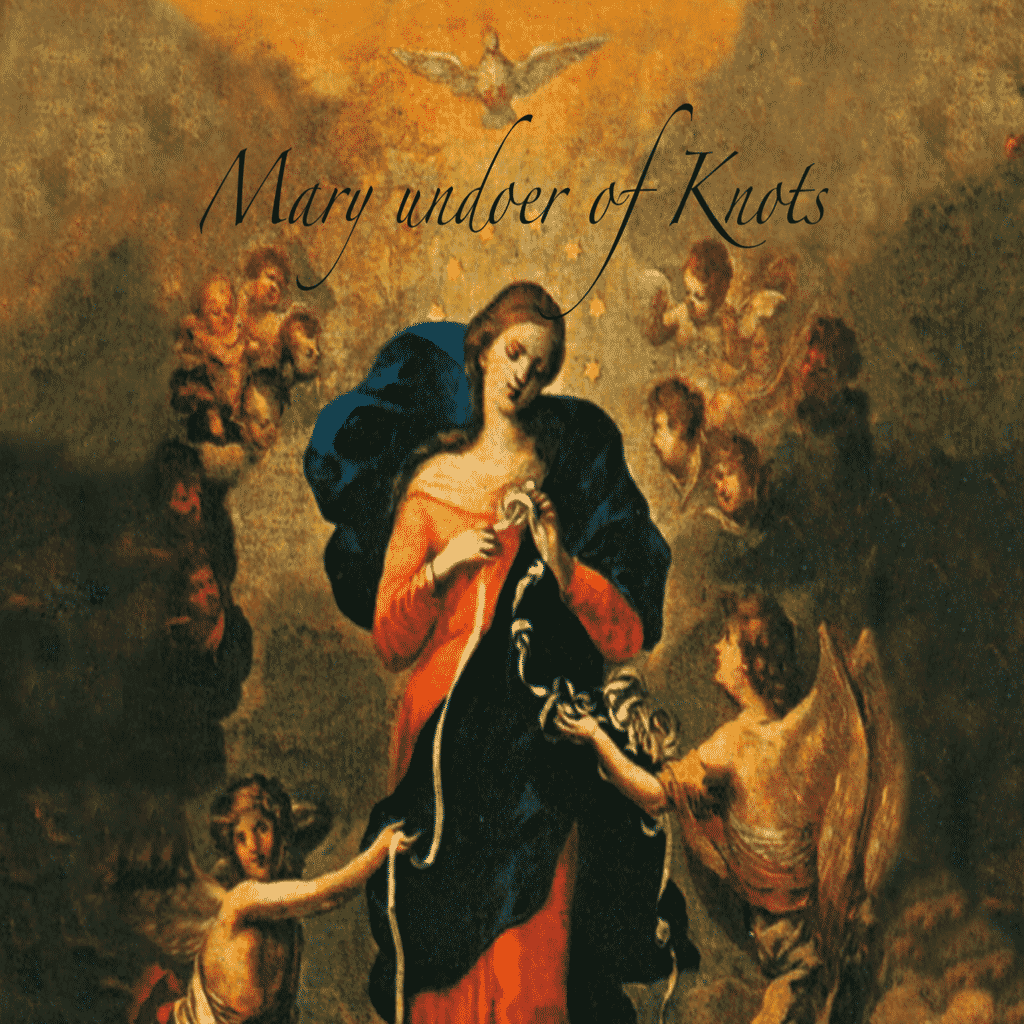 “We pray to you, Blessed Mother, that you might untangle the knots that oppress us.

So that we can witness with joyto Your Son and Lord, Jesus Christ.” (Pope Francis)

There are countless devotions to Our Lady, none greater than the faithful praying of the Rosary.   Recently, however, I came across a beautiful devotion which has grown in popularity over the years.   It has an unusual and interesting title:  Mary, Undoer of Knots.   Unlike other devotions which are associated with Marian apparitions such as Lourdes and Fatima, this one originates from Mary’s intercession in an unhappy marriage.

It happened in September 1615 when a German nobleman, Wolfgang Langemantel, and his wife, Sophie, were experiencing serious marital problems.   In a desperate attempt to save his marriage, Wolfgang sought counselling from a Fr. Jakob Rem, a Jesuit priest who was well known for his devotion to Mary.  Fr. Rem encouraged Wolfgang to bring his marital issues to Our Lady which he did.   Wolfgang took heart and returned home with new hope for his marriage.   Although the details are lost to history, it is known that he and his wife, Sophie did indeed reconcile.

In 1700, Fr. Langenmantel, the grandson of Wolfgang and Sophie commissioned a painting of his grandparents’ story.   The artist chose an image depicting Our Lady working to untie knots in Sophie and Wolfgang’s marriage ribbon – symbols of the problems which had led them to the brink of divorce.

For many years, the painting remained in obscurity in Augsburg, Germany – first in the Church of St. Peter am Perlach, and then in the city’s Carmelite convent.   In the 1980’s, it was returned to the Church, where it so happened a certain young visiting student named Jorge Mario Bergoglio first saw it.   The future Pope Francis was so taken with the image, he bought a postcard copy of it and brought it back to his native Argentina.

Over the years, Pope Francis has talked about the devotion and how Mary’s faith ‘unties the knot of sin.’   This idea refers to Mary’s role in salvation history.   St Irenaeus, writing in the second century, explained it this way: “The knot of Eve’s disobedience was untied by the obedience of Mary.   What the virgin Eve bound by her disbelief, the Virgin Mary loosened by her faith”.

We too can be ‘bound’ by our own disobedience.   As Pope Francis explained, when we fail to follow God’s will in our lives, “a kind of knot is created deep within us.”   These knots take away our peace and serenity.   They are dangerous, since many knots can form a tangle which becomes more and more painful and difficult to undo.

There is, however, one thing we can all be sure of: nothing is impossible for God’s mercy!   Even the most tangled knots are loosened by His grace.   And Mary, whose ‘yes’ opened the door for Jesus to undo the knot of the ‘ancient disobedience’, is the Mother who patiently and lovingly brings us to Him, so that He can untangle all our troublesome knots.

Mary, Undoer of Knots is a beautiful devotion which reminds us that we are often overwhelmed by the many knots we experience in our own lives.   It is, therefore, comforting to know that just as a child goes to its mother with a hopelessly-tangled mess of knots, her loving gift to us is that she will take our knots which are made up of everything that is not the will of God and unravel them one by one.