The Visitation of the Blessed Virgin Mary 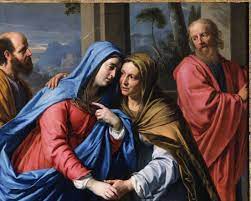 EDITOR’S NOTE: THE  RECENT ONTARIO  STORM CAUSED IGNATIUS TO CRASH.NOW  WE AR BACK! THANKS FOR YOUR PATIENCE

The Feast of the Visitation commemorates the meeting between the Blessed Virgin Mary and her cousin Elizabeth. It’s no simple visit for a chat over coffee. It’s two women coming together, with two unborn babies who will grow up and change the world. And it’s a three-month visit.

The account of the visit is found in Luke’s Gospel. We hear much rejoicing at the amazing things done by God for a barren Elizabeth and a young Mary. Elizabeth declares Mary and the child in her womb blessed; Mary responds with the Magnificat, that wonderful hymn of praise. The future John the Baptist is described as leaping in his mother’s womb.

Several years ago, I was at a gathering that included two pregnant women. Although they didn’t know each other, they immediately gravitated to each other and spent the remainder of the evening in conversation, obviously enjoying each other’s company. I am sure that they had many things to share. Both were young and it was their first pregnancy.

Mary and Elizabeth knew each other, and they differed in age. It was the first pregnancy for each woman. They shared a bond. We can imagine that they had plenty of laughter and stories, not least of which would be the unusual nature of the conceptions and the reactions of Zechariah and Joseph.

Mary’s words show that she was humbled by the fact that God wanted to do such great works through her. Much has been written about the words and images of the Magnificat. This Feast provides us with a chance to reflect again in a new way, to consider again what touches my heart.

Mary’s is a song of praise by a woman who is deeply grateful for all she has received and for the reality that God is alive in the world. She may even have proclaimed it at the foot of the Cross. It’s likely that she looked back at her son’s life in those final hours. There was much suffering, but also much for which to give praise to God

Mary and Elizabeth! Mary was carrying God in her womb. That brought joy and gladness to Elizabeth and the child within her womb. Let’s take some time to sit in on their visit and the many conversations over those three months.