Saint Marie of the Incarnation 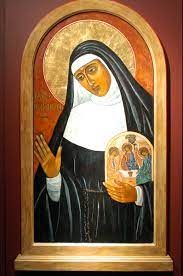 Courageous people inspire us, particularly when they overcome obstacles, in order to follow their calling. Saint Marie of the Incarnation lived this quality, both in her youth in France and later as an Ursuline nun in New France.

Because of Marie’s courageous actions, she has earned a place as one of the founders of the Church in New France. She was the first superior of the Ursuline order in Canada, was an author and mystic, and played a significant role in the early education of young women.

Marie Guyart was born in Tours, France on October 28, 1599 and died in Quebec in 1672. Her father, Florent Guyart, was a master baker and her mother, Jeanne, came from an illustrious family. Theirs was a devout Catholic family. Marie attended school from a young age.

From childhood, she showed a remarkable spirituality and felt drawn to religious life. She mentions that when she was seven, she had a dream in which she experienced Jesus asking, “Will you be mine?” Marie answered, “Yes!” However, in obedience to her parents, at age seventeen, she married Claude Martin, a silk maker. She vowed to herself that if in the future she was free to do so, she would consecrate herself to God.

Less than two years after marriage, Claude died, leaving Marie with a young son and a bankrupt business. She opted not to re-marry, even though it would bring financial security. She helped with the struggling business of her sister and brother-in-law. The business did well because of her hard work and business skills.

Meanwhile, Marie continued to experience mystical visions. A religious calling continued to attract her, but she had a young son to care for. Finally, after much discernment and prayer, she entered the Ursuline monastery at Tours. This was only possible after she arranged with her sister for the care and education of eleven-year-old Claude.

At last, she could consecrate herself to God in a religious community. Leaving her child behind was not an easy decision for her and left her heartbroken, fearing that she was abandoning her responsibilities as a mother. She says, “I felt more in leaving my son, whom I loved so much, than if I had given away all possessions imaginable … it seemed that I was being hacked in two!”

The later correspondence between Marie and her son shows that this remained a source of worry during her years in Quebec. They had an animated and spiritually rich correspondence. Claude became a Benedictine priest and eventually wrote his mother’s biography.

After she took vows, the Ursuline order was quick to see the knowledge and skills in Marie of the Incarnation. She taught for several years and cared for the novices. During that time, she was captivated by reading the Jesuit Relations, letters sent to Europe by the Jesuits ministering in the faraway lands of New France.

Marie describes her spiritual movement as an intense zeal for saving souls, and saw herself specifically in New France. After discernment and preparation, Marie and two other Ursulines and a wealthy widow named Mme de la Peltrie sailed to Quebec in the summer of 1639.

They established a temporary convent in the lower town and in 1642 moved to a permanent structure in the upper town, where it still stands. This enabled them to accept young women for training in religious and secular areas.

Marie’s major work in Quebec was the education of French and First Nartions girls. She learned the Algonquian and Iroquoian languages, wrote theological and spiritual works, and created Indigenous catechisms and dictionaries. Marie made important social connections in the colony and helped draw up its Constitutions. Her letters to Europe provide an important understanding of the history of New France from 1639 to 1671.

Marie died in Quebec on April 30, 1672, after 33 years in New France. Her superior stated in a letter to Claude, “One of the things I admired the most in her was the exact fidelity and perfect submission to all that she knew God was asking of her.”

Marie of the Incarnation had the courage and strength to keep saying Yes! to Jesus Christ in all the events of her life. The Venerable Pope John Paul II beatified Marie on June 22, 1980. Pope Francis canonized her on April 2, 2014. She is celebrated on April 30.