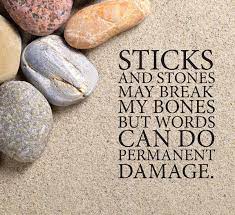 We were one of a few black families living in a mostly white neighbourhood in the town of Oakville population 4000 in the early thirty’s.  My parents with their four children had moved there from Toronto when I was four years old.

For the most part we made good friends and did well in school both academically and athletically.   When occasionally a few rather ignorant boys would call us names our parents would remind us; “sticks and stones can break my bones but names can never hurt me”.

However as I got older I began to realize the limitations of that saying and began to rephrase it to “stick and stones only break my bones but names can really hurt me”.  This phrase is a reminder for me to always be respectful  in how I speak to and speak of others.