Travel “up the Coast” of James Bay and Hudson’s Bay

Since Pope Francis accepted Archbishop Prendergast’s resignation from the Archdiocese of Ottawa-Cornwall on having reached the age of retirement in December 2020, he has been serving in an interim role as Apostolic Administrator of Hearst-Moosonee, a diocese whose territory covers about one third of the landmass of the Province of Ontario. Though sparsely populated, it has a significant Indigenous presence: Cree in the Moosonee region and Ojibway in the Hearst region. (All photos are  courtesy of Archbishop Prendercast, SJ)

Covid-19 has restricted a great deal of travel. In my case it kept me as Bishop from visiting my flock, the Catholic Christians who live in isolated indigenous communities on the west side of James Bay. As restrictions were loosened, I was able in late November 2021 to fly to Fort Albany, Attawapiskat and Peawanuck, beginning from Moosonee and Moose Factory as my base, which I reached via the “Polar Bear Express” from Cochrane.

Father David Reilander, President of Catholic Missions in Canada (CMIC), our principal funding agency accompanied me to all these villages, except the small hamlet of Peawanuck near Hudson’s Bay. With his wide experience as a pastor, including a stint as a missionary in the Yukon, Father Reilander was able to offer suggestions for the diverse challenges in each locale. For example, he offered advice regarding the damage caused to the rectory and church in Fort Albany by a water heater breakdown and flooding (we had no hot water during our stay!) or by examining structural issues in Moosonee’s Christ the King church which need to be addressed promptly to forestall greater costs later. 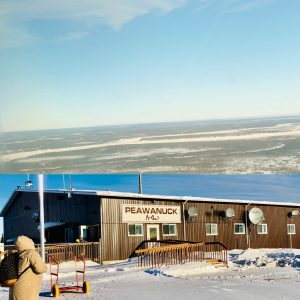 The Church, however, is not principally buildings but the faithful communities that gather and worship in them. And each faith community these days faces unique as well as common concerns (such as pandemic worship limits).

Our first stop was Fort Albany, the site of St. Anne’s Residential School, which was a harsh environment for indigenous children, mainly Cree, who suffered loss of their language, culture and access to parents and grandparents, key persons in introducing youngsters to attachment to the land and traditional ways: trapping, hunting, fishing, the understanding of herbs and plants for nutrition and healing. Troubling memories by survivors were never far from the surface in our conversations in the North, particularly in this community. There, we visited the band office, the school and were joined for Mass on several evenings by a small number of Elders.

Father Sudhakar Jayabalam HGN is the priest in Fort Albany; he hails from India and is much appreciated as he makes efforts to celebrate Mass in Cree

Two members of the Society of Mary Mother of Mercy, a Nigerian foundation, jointly share responsibility for the two northernmost parish communities—St. Francis Xavier in Attawapiskat and St. Kateri Tekakwitha in Peawanuck.

The community of Attawapiskat is still grieving the loss of its church in a fire in April that destroyed precious stained glass windows which depicted traditional indigenous images. Parish members attended an open session where they could share their frustrations at their loss and express their hopes for a speedy rebuild of the church in its classical style. One Elder made an impassioned plea for a committee to work immediately at restoring the central place of the church. We have already begun to establish that body. Mass followed the exchange and then a reception took place in the parish hall. As the pastor, Father Raphael Obiadi was away in Nigeria for his father’s funeral on that very day, we prayed for the consolation of his family along with our other intentions.

Moose Factory is separated from Moosonee by the Moose River; crossing it is by boat or the winter road, but these pre-winter days and in the spring “break up” only by helicopter. I presided at an anticipated Lord’s Day Mass at a home in Moose Factory on my first Saturday there; on the next Saturday, Father Reilander and I made aerial passes over both towns by helicopter.

Moosonee’s Church of Christ the King had been a cathedral in the past; Father Paul Awowole, a diocesan priest from Nigeria serves as its pastor as well as Vicar General of the Diocese of Hearst-Moosonee and coordinator of pastoral outreach in the four regional parishes.

I was privileged to preside at Mass on the parish’s patronal feast day. The next Sunday, Father Reilander spoke about the work of CMIC in light of efforts at reconciliation in Canada. We prayed for the delegation of indigenous leaders who had been planning to meet with Pope Francis at the Vatican before Christmas; due to health concerns related to the omicron variant of the covid-19 virus that visit has now been rescheduled for early 2022.

Rounding out the tour of my mission churches, I flew to Peawanuck, which this year marks the 35th anniversary of a devastating flood that forced residents of this First Nation to flee the Town of Winisk for higher ground 35 kilometers inland. A good contingent gathered for the Mass I celebrated and engaged in a dialogue with me on issues of concern to them. They are pleased that a priest, Father Michael Nwadinobi is resident among them and very happy, too, that he is learning their Cree language. 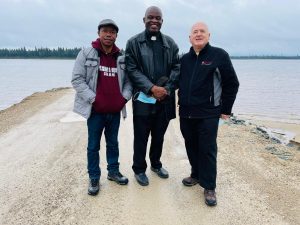 Traditionally, Sunday, December 12th marks the feast of Our Lady of Guadalupe and is observed in Canada as the National Day of Prayer in Solidarity with Indigenous Peoples. When Mary appeared as an indigenous woman 490 years ago in 1531, this led to millions of Native People becoming Catholic Christians. So we in Hearst-Moosonee confidently entrust to Mary’s maternal intercession the Cree and Ojibway Christians of our diocese along with our ongoing efforts at healing and reconciliation.

Since Pope Francis accepted Archbishop Prendergast’s resignation from the Archdiocese of Ottawa-Cornwall on having reached the age of retirement in December 2020, he has been serving in an interim role as Apostolic Administrator of Hearst-Moosonee, a diocese whose territory covers about one third of the landmass of the Province of Ontario. Though sparsely populated, it has a significant Indigenous presence: Cree in the Moosonee region and Ojibway in the Hearst region.