The Occupation of Ottawa and the Capitulation of State Authority 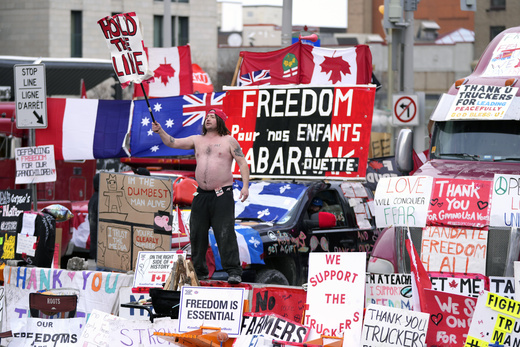 The right to protest and peaceful assembly is paramount in a liberal democracy. Every citizen has the right to take issue with a government policy, to assemble like-minded people, and to protest and make their voices heard. On first blush, the convoy that has been occupying Ottawa is just this: a group of Canadians exercising their democratic rights, enshrined in the Canadian Charter of Rights and Freedoms, to protest.

However, something more nefarious has been underway. I have not lived in Ottawa as long as some people, including some readers of igNation; however, I know how the State, in particular its armed detachments, i.e., the police, acted during other protests, such as Black Lives Matter or climate change protests. In all of those, the Ottawa Police were heavily present. And the protests were required to have permits to even assemble. Moreover, these protests only lasted for a couple of hours, and even if they wanted to stay longer, the State authority would not have allowed it.

Watching this unfold, I began to get angry. Angry at the police; angry at the State; and angry of the hypocrisy. I also began to wonder if Leftist theorist were correct. I began to wonder if this was perhaps a small taste of what occurred in the interbellum period. Now, this sounds alarmist and perhaps a little exaggerated. I will admit that; however, being on the ground and seeing the police service not do its job, it raises many questions. And for me, someone who grew up trusting the police and seeing the police as a force for good, it pushed me further into the camp that is calling for serious restructuring of police services.

There is a lot to unpack in that paragraph. Let’s begin with the Leftist theorists. The narrative is that the State authority will endure right-wing agitation, such as protests and apparently occupations, because this agitation tends to not threaten the hegemonic order or the status quo. In other words, right-wing agitation tends to not threaten the economic, i.e., capitalist, order that the State authority upholds. State authority views left-wing agitation—here we have a large catch-all that ranges from the Occupy movement to Black Lives Matter to climate activism to Indigenous mobilisation, think rail blockades—as an agitation that threatens the status quo, economically and socially.

Therefore, the State authority attempts to keep it under control. What is interesting here is that left-wing protests most often have permits and are targeting one particular policy. Furthermore, left-wing protests have a clear beginning, middle, and end. The current occupation of Ottawa, which the police are at long last ending as I write this piece, lacked a permit and lacked a clear beginning, middle, and end.

Why did it take police three weeks to intervene and beginning making arrests? The answer is still not clear. One hypothesis is that the inaction is attributed to Ottawa Police officers being sympathetic to the cause of the occupation. This is, of course, unsubstantiated, but it would be aligned with the rough sketch I offered above about the State’s authority enduring the occupation. Another likely reason is that former members of various branches of State authority (municipal, provincial, federal, and military) are embedded in the occupation group, feeding them tactical information. In this light, it is then possible to view the inaction of the police warranted caution for civilian life in the neighbourhood.

But even in this light, it is difficult to defend the police’s inaction when the Ottawa Police Service ostensibly abdicated its duty to defend the citizens of Ottawa, namely the citizens of Centretown, the Market, Lowertown, and Sandy Hill. This abdication will not soon be forgotten by the residents of these neighbourhoods. In fact, the abdication convinced many that the Ottawa Police Service does not merit the budgetary increases it has continued to receive. As we head into the municipal election in the fall, I am certain that policing and the police budget will be a major campaign issue.

I should conclude by discussing my gesture toward the interbellum period. Much noise has been made by many of the Left and in the mainstream that the occupiers in Ottawa and the related occupations in Windsor and Coutts demonstrate visible right-wing and far-right tendencies. I tend to agree with this observation. Is this to say that the occupiers are all fascists and Nazis, like those thugs who overthrew the nascent liberal democratic orders in Italy and Weimar Germany?

Not exactly. It is important here to choose one’s words wisely. In both situations, interbellum Italy and Weimar Germany, the mainstream right-wing movements ended up capitulating to Mussolini’s and Hitler’s respective movements—indeed the same could be said for Franco’s Nationalist movement in Spain that sadly was largely endorsed by the Church, but that is a topic for another day. What needs to be observed over the coming years is what happens to Canadian conservatism. We are already seeing shifts to the right (the Reform Act vote on O’Toole’s leadership being a prime example) within the leadership of the Conservative Party of Canada.

In moving the Conservative Party to the right, they risk polarising the country further. This is what has occurred in the United States, and the result is a fractured electorate and an electorate that begins to take on a Schmittian quality. Carl Schmitt theorised that politics can be whittled down to a friend-enemy distinction. There is much to Schmitt’s philosophy that cannot be explored in the limited space we have, but the essential is that he believed liberal democratic states to be weak and in need of a sovereign dictator—this sounds similar to Hobbes’ argument in Leviathan.

Lars Vinx writes, that “[i]n a liberal state, Schmitt fears, the political nation will slowly wither [sic] and die as a result of spreading de-politicization, it will succumb to internal strife, or it will be overwhelmed by external enemies who are more politically united (CP 69–79; L 31–77).” I do not subscribe to Schmitt’s analysis that we need a sovereign dictator. I do agree that certain tendencies of the liberal state (the hollowing out of the public square, the ‘neutralism’ and proceduralism of neoliberalism, etc.) can result in the withering away of a sense of national unity.

Instead of turning to a sovereign dictator or the Hobbesian Leviathan, we can turn toward our own shared tradition: Catholic philosophy, ranging from late Antiquity through the Scholastics to the contemporary era, offers a more appealing and pluralist approach to solving the political crises that are running roughshod across the land. Turning to Catholic philosophy can have its own issues. A topic I explore in another post coming soon.