Finding Consolation at the Foot of His Bed 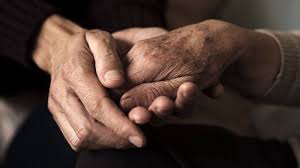 Three years ago, Ron, a dear friend and neighbour, was forced to spend many weeks in hospital due to his severe health problems but also very much against his will.   Although he knew he was drawing close to death, and needed medical assistance, his dearest wish was to spend his last days in the familiarity of his own home.

Finally, he reached the end of his tether and was determined to the discharge himself from hospital.   No reasoning could change his mind.   He begged me to pick him up and take him home.   It broke my heart to say I couldn’t do this, much as I wanted to, as his family had already, in no uncertain terms, stipulated they did not want me to become involved.

Ron, unbeknown to me, then had the hospital contact an old friend of his who occasionally kept in touch.   When I heard what he had done, I was devastated as this old friend had absolutely no idea that Ron was dying.

Because Ron had discharged himself, there was great difficulty in organizing immediate outside help.   In some ways, I could say that’s when the  ‘nightmare’ began for me but that would not be quite true as a dear friend of mine agreed to help me.   We moved into the house for four days and nights and did everything possible to keep Ron comfortable.   He was a stubborn man which did not make it any easier for us as he refused to stay in his bedroom but insisted on remaining on a make-shift bed in the lounge room.

Spending those last few precious hours with Ron, I experienced the overwhelming comfort of totally entrusting everything to the Lord.   My dear friend Joan and I hardly slept, we just prayed and prayed mostly the Sorrowful mysteries of the Rosary, individually and together.  I prayed for strength to do the many things that had to be done, to be able to forgive Ron’s family for the hurtful things of which I was accused, and for Ron to realize his dying wish.

The last night we spent in the house, we drew our chairs close to Ron’s bed; Joan sitting at the head, and me at the foot.   Over and over, we prayed the Sorrowful mysteries.   The hours passed slowly by.   Ron was sleeping peacefully.   We were utterly exhausted but also very much at peace within ourselves.

We each knew we had been abundantly blessed to share in Ron’s final journey.   Together, we were able to share our gifts and prayers with him.   And we both knew too, we could never have managed all this if we had not been comforted by the presence of the Lord, and for me, personally, an understanding, a mere glimmer, of what Our Lady had experienced as she too, stood at the foot of the Cross as her Son Jesus was dying.