The Great Winnipeg Blizzard of 1966 and St. Paul’s High School 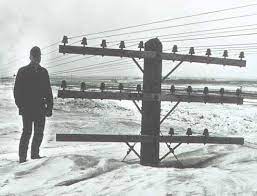 NOTIFICATION from the editor of igNation:  Yesterday’s post – Hardships and Miracles – was wrongly attributed to Peggy Spencer..The author of the post is Norbert Piche.  The correction has been made and an apology sent to Norbert and Peggy.

It began on a Friday morning in early November. Just one kid made it into school that day – he was dropped off at 7:00 AM by his father, and he spent the next four days there alone.

In those years nobody would have thought of inviting him into the Jesuit quarters, where there were at least two guest rooms, one of them for our Provincial Superior, and so he stayed in what I think was a nursing station.

There is a black and white photograph of him in the Saint Paul’s Crusader Yearbook for 1966: he’s standing all by himself in a classroom, and staring forlornly out of the window at mountains of snow outside.

Mountains there were indeed, with snowdrifts as high as the roof of the school, and parked cars on every street buried completely under snow. Father Barry Connolly started shovelling snow from a second storey window in order to get out, and Father Frank Brennan went off on someone’s snowmobile to celebrate Mass for the Sisters of the Sacred Heart. 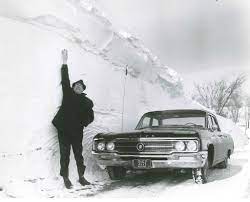 Once the snow stopped flying and wind died down, the other Jesuit scholastics, John Pungente, and I (those still in formation and teaching at the high school) grabbed shovels and manned the tractor and snow blower, helping Brother Alf McAndrew clear the way in front of the garages.

One of the priests insisted on taking out a car, which soon got stuck. When he took out a second car and got it stuck too, Brother Alf lost his cool and uttered some choice words at the poor father.

But for the first two days the temperature dropped to about -30 C, and the winds howled, and at least three or four feet of snow was dumped on the city. Nothing moved; everyone stayed indoors until it was finally safe to go out on skis and snow mobiles.

Eventually the army was called in to help clear the roads and the perimeter highway, so that fire trucks, police cars, and ambulances could get around the city, and slowly things returned to normal.

On Sunday evening a few people made it to the popular 9:00 PM Mass at Saint Ignatius Church, including Geoff and Rita Doerr, who provided the music. I don’t remember who presided at the Mass, but it was a cosy little gathering.

On Tuesday morning classes resumed as usual, and most of the kids were excited to return to school and share their adventures of coping with the blizzard – all except the one, perhaps, who had been trapped there during the previous four days.