Presentation of the Lord – Candlemas 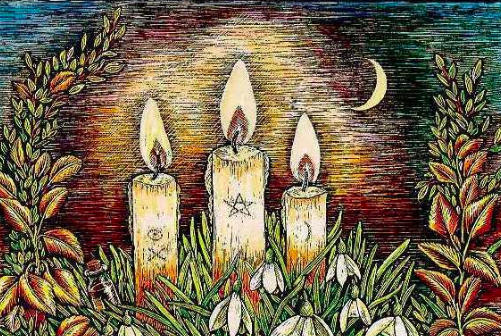 I saw an interesting sight a few years ago in my neighbourhood on December 26, the Feast of Saint Stephen. The household across the street had their discarded Christmas tree on the sidewalk, ready for pick-up by the city. It caused me to wonder when most people think that Christmas ends.

Some people are pragmatic about taking down decorations and assume Christmas ends on the day before we head back to work or school. Fair enough! More religious types speak of Epiphany and think of the song The Twelve Days of Christmas.

Of course, those who are in the know realize that Catholicism ends the Christmas season with the Baptism of the Lord. So, being a relatively younger Jesuit (can you be relatively young at 65!), at least younger that most Jesuits, I used to wonder why an elderly Jesuit I lived next door to used to leave his nativity set up until February 2, the Feast of the Presentation of the Lord in the Temple.

In my naivety, I thought he was out of it. Or just too lazy to store the nativity set. It turned out that Fr. Larry was on to something. Candlemas, February 2, celebrates forty days after Christmas. Traditionally, it was the official end of Christmastide, marking the end of the liturgical seasons of Christmas and Epiphany. That was suppressed before I was born.

Susan Wills, a writer for Aleteia, suggests that courageous people leave decorations up until February 2. “Neighbors may shake their heads, but it could also be an opportunity to reintroduce them to the wonderful season of Epiphany and the glorious, multi-faceted Feast of the Presentation of the Lord.” So, Fr. Larry was much more courageous than I am!

This Feast commemorates the epiphany of the Lord to the elderly and righteous Israelites Simeon and Anna. Simeon refers to Jesus as the light to the Gentiles and it is traditionally on this day that beeswax candles are blessed for use at home. The Holy Family is visiting the temple to fulfill the obligations of the old law.

Simeon recognized Jesus as Messiah and prepares Mary for the sorrows of Holy Week; “a sword will pierce your own soul too.” We know that Mary pondered and treasured the mystery of her son. It took her a while to comprehend the truth of who he was.

Simeon and Anna were more intuitively aware of the truth of this baby and their awareness was immediate. They knew, beyond a shadow of a doubt. Is it because they were older and wiser?

Is it because they were so in tune with God? Or, is it, perhaps, because Mary and Joseph are parents who just want what is best for their child and don’t want to know too much that may upset them.

Simeon can declare, “Master, now you are dismissing your servant in peace, according to your word; for my eyes have seen your salvation.” Anna is moved to speak to others of what she has experienced, much like the later disciples who proclaim the Good News.

Candlemas is forty days after Christmas Day. It is midway between the winter solstice and the spring equinox. Perhaps that is why the same day is known as Groundhog Day. We are halfway to spring, so it’s a good opportunity to ask what the remaining weeks of winter will bring.

We already may be thinking of spring and our hopes for new life. Meanwhile, let’s take a minute or two to ponder how we are experiencing the epiphany of the Lord.