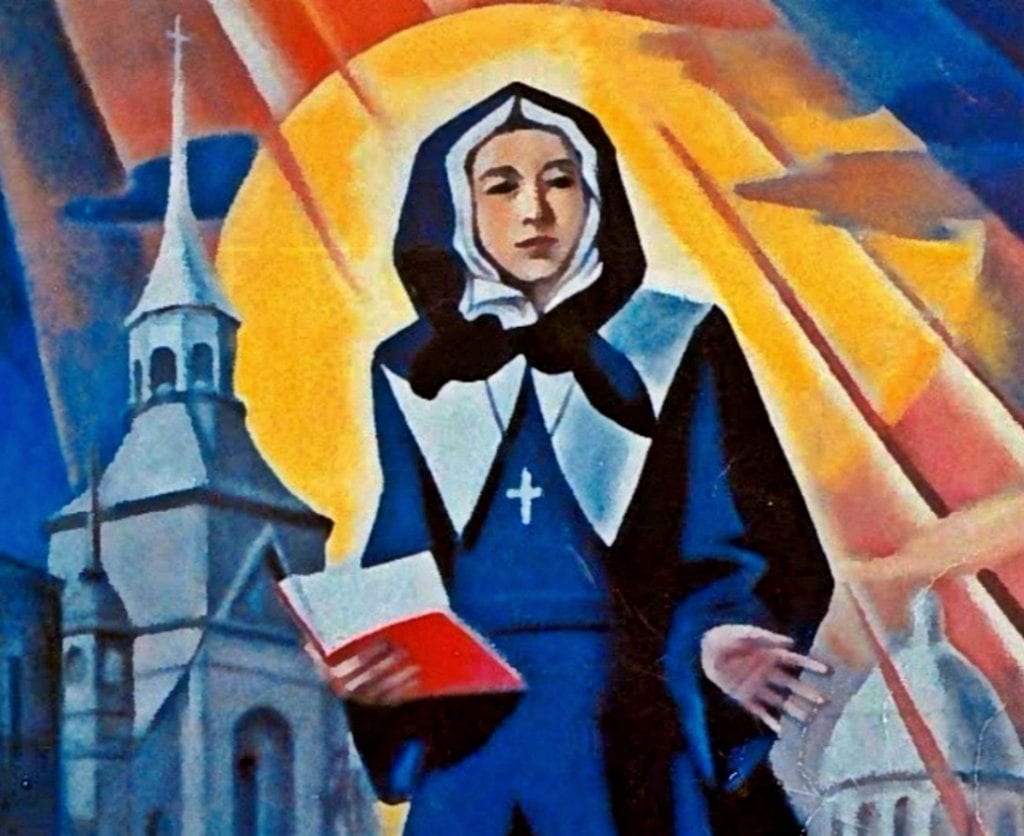 Saint John Paul II reminded the Canadian bishops in 1999 of the need in our culture for a new surge of the same energy that brought the Church to birth in this country. He was referring to the courageous ministry of people such as Saint Marguerite Bourgeoys, the seventeenth century founder of the Congregation of Notre Dame.

The Pope drew a link between the wilderness of New France and the frontier of our climate. Canonized by John Paul on October 31, 1982, Marguerite was the first woman in Canada to be declared a saint.

Marguerite Bourgeoys was born and baptized in Troyes, France on April 17, 1620, one of twelve children born to devout parents. She was nineteen years of age when she lost her mother and took over the care of her brothers and sisters.

Not long after, through the inspiration of the Blessed Virgin Mary, she consecrated her life to God and joined a group of women who were dedicated to teaching poor children of the town. This work increased her desire to be a missionary and she pursued the specific way she would serve God. She was motivated by the realization that, “I must do everything for the greater love of God.”

In the fall of 1653, she arrived in New France, having accepted the invitation of the governor of Montreal, who travelled to France looking for volunteer teachers for the French and Indigenous children in the colony of New France.

Marguerite felt confirmed in her call by Our Lady’s promise: “Go, I will not forsake you.” She started working in the Hotel Dieu Hospital with Jeanne Mance, a nurse and one of the founders of Montreal. They worked hard to promote the religious life of the colony.

A few years later, Marguerite opened the first school in Montreal. It was built in an abandoned stable. She was convinced of the importance of the family in building the new country. Thus, she saw the need to teach young women both domestic skills and catechetical values, in addition to areas such as reading, writing, and arithmetic.

She became mother, friend and social worker to those she served. She initiated a school system and a network of social services that eventually extended through the whole country. Marguerite was unselfish in her preoccupation with the concerns of others.

On three occasions, she returned to France in search of other teachers to follow her to the challenges of the New World: poverty, cold, hunger, and the perennial threat of war. The women who responded favourably to the life of prayer, heroic poverty and untiring devotedness to the service of others started to act increasingly as a religious institute. They desired to remain uncloistered, not the normal path for women’s communities at that time.

They eventually branched out from schools to care for the poor and hungry, started a vocational school, taught young people how to farm, and taught at a school for Indigenous peoples. The congregation grew and within a few years was attracting women born in New France. They became the first Sisters of the Congregation of Notre Dame. The Church finally approved their Constitutions in 1698, commissioning the community to continue their missionary work. The CNDs were the first unenclosed foreign-missionary community for women in the Church.

Mother Marguerite spent her final years continuing to serve, praying and writing her autobiography. The “Mother of the Colony” died on January 12, 1700, just short of her 80th birthday. She was already canonized in the hearts of all those who knew her. They recognized her as a woman of holiness, courage and perseverance in carrying out God’s desires despite the obstacles and hardships she faced.

By the time of her death, there were forty sisters. The ministry of the CNDs continues today in nine countries on four continents. The sisters are engaged in active social justice, emulating Marguerite’s reminder to be “little, simple and poor. I want at all costs to love my neighbour.”