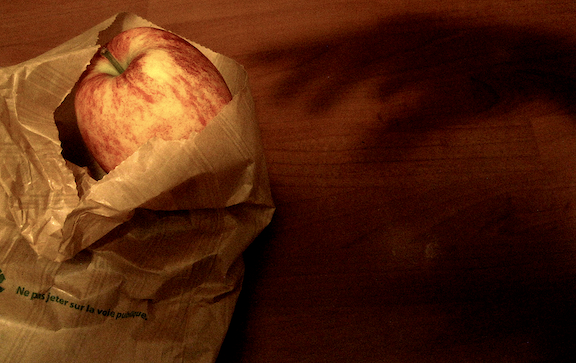 Marjorie broke the law every day. While it wasn’t a big law, the fact that she broke it repeatedly with keen intent made her very, very guilty. She knew eventually she’d be caught. It was the idea of being found out that drove her to commit the offense with such alacrity. She sometimes wondered if she would end up in a cell with someone else, or if she would be confined to a solitary place. For many years she’d wanted to get a tattoo. The more she sinned, as she saw it, the more she thought she’d better get the tattoo before it was too late, and she’d be suffering some homemade inking behind bars. Marjorie wasn’t a brave criminal. At least not the sort who could cope with physical pain, though she was brazen in committing her crime. She committed it each day before the very eyes of her friends and coworkers.

Marjorie was fourteen when she began doing the work she would eventually pervert to serve her desire for excitement. That was really all it had ever been, at the beginning. She’d spent so many years dutifully fulfilling her role. She thought she might have behaved differently if she had had better opportunities. But she was an orphan—or rather an unwanted child in a large family, sent off to an orphanage where the children were put to work once they were of an age that saw them eating too much food.

“A balance of intake and outtake is the most holy way,” the head nun at the orphanage told the children when she confiscated sweets they’d been given by a kindly visitor. Marjorie had run her life on that phrase, carefully measuring everything she ate, each purchase she made. Her existence was one of good, orderly direction. She was a trustworthy worker. She advanced quickly to work more hours, though her role never really changed. It was a time when more hours were seen as a privilege as much as more responsibility is seen today.

On her days off, Marjorie would sit on the moors daydreaming about being a Hollywood starlet. She was, in fact, a real looker—or so Lionel, the annoyance who became her husband, always used to say.

“My Marjorie, she’s always been a looker,” he’d croon when he’d had a few too many beers. They’d met at a dance where Marjorie wanted to be asked to waltz by Lionel’s best friend. Her glances toward the young man were misconstrued and Alan, the target of her affections, urged his pal Lionel to respond to her winsome gaze. Her mistake had been in accepting Lionel’s request for a dance. She believed it would get her closer to Alan. Instead, that very night she lost her head after too many gin fizzes. She “fell pregnant”—as such catastrophes were then described.

“I’m a long way from California now,” she murmured when they left the magistrate’s office the day they were married. Still, she loved her first son more than anything in the world—or so she thought. Something about him being a bastard excited her. He was her James Dean. He was going to be a star in spite of the marriage that had occurred a little while after his birth. She was just as devoted to the other two officially legitimate sons who arrived after similar debauched nights with Lionel. It was only when she abandoned weighing and measuring her pints that she could stomach being intimate with him, but then she always lost control of the situation…Eventually, though, all Lionel did was drink while Marjorie worked more.

The harder things became, the more measured she was about all the details of the family’s life. She never could fathom why she had not been able to be measured on that one fateful night. Maybe the idea of having some kind of home was more important than the risk that Hollywood might have been. She knew one girl had gone off to be a film star and nobody had ever heard about her again, though there were those who claimed she was Julie Andrews…

“A tattoo, at your age?” Her friend Sybil had chuckled when Marjorie said she’s been looking at designs. “Why not?” Marjorie snapped. Sybil was surprised at her sharpness. Marjorie had never been an angry-seeming person. Yet isn’t that just the thing about knowing anyone? —you never really do.

When Marjorie began committing her crime, she was almost a grandmother. Maybe it was the impending change in family dynamics that drove her to begin. By the time she was well into her routine of sinning repeatedly, the shift had occurred and all three of her boys were fathers themselves. Their wives never worked, or not in the way Marjorie did; of course they cared for their homes and children. “That sort of ‘full-time work’ we managed to do with more full-time work like this too!” she’d say to Sybil when they went to punch in their timecards.  “Full-time work and then some!” Sybil would reply. And so they’d begin their day laughing. “Very sensitive work we do—after all! Just as delicate as childrearing and home caring….”

“More!” they chimed together as they took their places on the assembly line.

On the day she’d been caught—finally—Marjorie had felt a great surge of relief. She knew now that she would go down in history.  After all, her ongoing crime affected millions of people over the years. She knew she’d get at least a quarter page in The Sun or The Daily Express because she’d seen stories similar to hers all the time. Maybe that was how she had first gotten the idea. No, no, the inclination just seemed to arrive one day, “out of nowhere.”

When they hauled her away, she made sure she held up the arm she’d just had tattooed so it would be part of the news photo. She wanted to really inhabit her role. In fact, she was hoping she’d be put into solitary confinement since she had plans to write her memoirs, which she was certain would make a superb basis for a television show. She even knew the stars she’d want playing the people in her life. She was going to be adamant that Judy Garland play her—or Judy Garland’s daughter– if the whole process took a long time. “I was that kind of lady,” she’d say to herself. “It’d be a challenge for Judy to capture my way—would Judy get a real tattoo too…?” she wondered.

When it came time for Marjorie to be sentenced, the whole extended family were there. They were all amazed at what had come out about her. Their very own clever, but unremarkable, granny, mum, and wife, was a criminal. The courtroom was filled with curious coworkers and neighbors too.

“Before I sentence you, Marjorie, do you have anything to say about your crime?” the judge asked her, after her barrister and the Crown prosecution had finished making their respective cases.

Marjorie stood up. She turned to face the gallery and curtsied slightly. Then she faced the judge.

“It was just an apple,” she began. “It didn’t really seem to matter whether it was the one on the label or not.” There was laughter, which disappointed her slightly. “I mean, if the packet says Braeburn apple but doesn’t specify that all six apples are Braeburn, then I ought to be allowed to package one little Cox apple in with five Braeburns, or vice versa.” Marjorie knew that this was not sound reasoning. She and her colleagues had been told numerous times that it was imperative they never mix the varieties of apples; Braeburns in the Braeburn bag and Cox in the Cox bag.

“They were all British apples,” she explained. “Moreover, I know for a fact that sometimes a Cox is near as tart as a Braeburn. Er, sometimes, if you are eating the whole packet, your palate needs a little rest from the zing those Braeburns give you. So the first time I did it, it was really a favor to our customers. Then, I admit I couldn’t resist doing something I wasn’t supposed to—especially because it made so much sense to me.

“How was I to know that there was a speck of something in the Cox apples that isn’t in the Braeburns…that that might make some overly sensitive little brat have a stomach upset?” There was murmuring in the courtroom at this.

Marjorie sighed. “I was tired of being so good. Haven’t you ever been tired of being good? It is boring.” She glanced over at the parish priest who had been dutifully hearing her apple switcheroo confessions over the years, never thinking it mattered much. He had never taken her very seriously.

“It wasn’t a stomach ache, madam. It was anaphylactic shock,” the judge said in a sobering tone.

“But nobody died in the end!” Marjorie argued. “That isn’t how the story goes,” she continued, and although her explanation was not very sound, in the end, it touched the young judge’s heart to witness Marjorie’s pathetic predicament.

“You will be under house arrest for the rest of your life. You may only go out to do community service. You’ll take the children at the Grant Covenant Home for Abandoned Youth to the pictures every fortnight.”

Marjorie broke down in tears. Her plan was ruined. Worse, she would now have to suffer seeing starlets portraying everybody but her. “How will I write my memoir without the duress and solitude of really being imprisoned?!” she cried.

“You ought to have thought about that before you decided to perpetuate such a puny crime. If you had developed, er, multiplied, varied, your misdemeanors instead of just repeating one that came to you by instinct, you might have fostered the conditions you think you require to achieve the renown you seek.”

As it turned out, Marjorie could never have planned a better document of her existence than the film that was eventually made of her life. It was nothing to do with her apple antics. It told the tale of an elderly lady who religiously accompanied young ne’er do wells to the cinema. One of those ne’er do wells turned out to be an actor as famous as Laurence Olivier in his day or Idris Elba in ours.

“When I sat on the moors and dreamt of this, I never thought I’d have it because of a kindly old lady! Thank you, Marjorie; you are the apple of my eye,” the star had said when accepting the award for best actor in a motion picture in Hollywood. He was accepting the award for playing himself in a biopic about Marjorie, who had died just before the picture was completed.

She’d slipped on a piece of chopped apple that had been packaged in what was supposed to be a bag of six whole apples. It was the extra bit some girl who’d read about Marjorie’s life had begun inserting in the bags she packed at the factory.  The Sun published a story about the girl, calling her the Copycat Apple killer.

On Marjorie’s headstone, her family had the words “All About Eve” chiseled. Decades later, people wondered about the mysteriously marked grave.

“Mum?” asked a little girl visiting the cemetery to see her deceased grandparents. “Is that THE Eve—the one from the bible?” Her mother patted her head. They were both sipping on an apple juice concoction purchased at the local health food store. There were smiling apples on the plastic boxes that held their elixirs.

“No, dear, she was just one of the many Eves who have existed. But we all take after that first one.”

“Is that why I’m called Evie?!” the little girl chirped.

“Do you like apples too?” her mum enquired, as they knelt at her parents’ grave.