Ministry of Dying and Illness 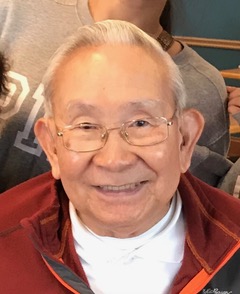 My sister-in-law passed away from multiple myeloma, a malignant cancer of the bone, over 10 years ago now.  It was a valiant 4 ½ year war, during which she never won any battles.  No stem cell transplant, or chemotherapy gave her any relief, but she soldiered on.

She hoped to live to see her then 13-year-old daughter get married, and that shortened to maybe see her 16-year-old son graduate from high school.  She saw neither.

I would visit her on days off in the afternoon.  It was nice outside one day when I was talking with her.I asked her how she did it, how she managed to get through each day.  I have never forgotten what I learned that day.

She taught me, “It’s like walking on a tightrope; you keep looking straight ahead, never look down and never look back.” How often in tight situations, especially in the operating room when disaster hits, have I kept that advice

She lamented that she could no longer do anything.  She couldn’t go to get groceries, drive the kids to school; even doing the cooking or doing the dishes was getting to be arduous.  She had stopped working years ago.

I told her that perhaps her ministry was to be the person to accept the hospitality and kindness and care of others.  I tried to convince her of how important it was to her family and friends – to be able to help her, love her and be with her as best as they could.  She should allow them into her world willingly, and that was her gift.

That was also something I learned that day – that the sick and the dying are not to be looked down upon or pitied or be the fulfillment of a need to be charitable, but to be rightfully respected as persons who minister to us through their illness and frailty.  I term this the “Ministry of Dying and Illness.”

Friend and fellow parishioner Maria Kelsey asked that I submit the tribute I gave my father at the beginning of his funeral Mass on August 9th.   You can see what I mean.

“My father Juanito Bautista, passed on to a new life on August 5, 2021.  That was what he truly looked forward to.  Last year, he told me that he didn’t mind dying, that he wasn’t afraid to die, but neither did he mind living another day.  He appreciated living another day.

I admired that, for he had developed some of that indifference in the Principle and Foundation of the Spiritual Exercises of St. Ignatius.  He did not prefer a long life to a short life.  He reminded me of Paul in Philippians:

“ I am hard pressed between the two: my desire is to depart and be with Christ, for that is far better; but to remain in the flesh is more necessary for you…”

We enjoyed his company as he enjoyed ours.   His children and grandchildren shared meals with him, and he really appreciated a good meal.  We feasted on a feed of fresh pan-fried trout two weeks ago, the first time we had done so in years.  He told me my adobo chicken always had just the right flavour.

His ministry was to be the appreciative recipient of other’s generosity, hospitality and help, whether it was his homecare worker Margarita helping him around the house, or his neighbour Gerry bringing over moose sausages.  And we all felt so happy with making him happy.

As a fresh medical school graduate, he was a risk taker.  With his wife Aida, he ventured to the United States, leaving a stable life in the Philippines for uncertainty in a new country.  They journeyed hoping and working for something better for themselves and for the children they would have.  This is the immigrant’s dream.

They came to Milwaukee with two suitcases each and little else. They could not afford to live together on Juanito’s salary.  Aida, who had a bachelor’s degree in pharmacy, and a music conservatory diploma, had to register for a laboratory technology course, so she could live for free in another hospital residence.

Juanito was a thoracic surgery resident living in residence at St. Michael’s Hospital.  The following year they both made enough to rent a place.  They are another story of immigrant grit and perseverance.

We were certainly a wandering family, moving from Milwaukee to St. John’s to Jersey City, New Jersey, to Fort Oglethorpe, Georgia, to Rome, Georgia, and then back to St. John’s.  Juanito was in search of security and satisfaction in his job.

Returning to the Sanitorium here in 1968, he became its Clinical Director. When the San closed in 1972, he spent his next 20 years working in the St. Clare’s Chest Unit, the last vestige of the old San until it closed in 1992.

As a doctor, he was known for always smiling, for being kind and caring.  His ex-patients and staff would greet him if they met shopping.  He had a tremendous memory.  He remembered those people who would say hello.  Right up until he died, he still remembered everyone’s birthday and anniversary.

In his retirement, he became a very busy grandfather. All the grandchildren were close with their grandparents.  He and mom would be over caring for babies, who grew up to students needing to be driven by a patient grandfather who knew all the shortcuts all over town, and how to turn left a little too late and get away with it using the little old man smile at the other driver.

Unlike Puff the Magic Dragon, who disappeared when Jackie Paper grew up, Juanito and Aida remained a part of their grandchildren’s lives. Family was central to their lives. They attended all kinds of graduations all over the place, as their health permitted. Family gatherings were frequent.

When Aida needed assisted living, he moved in with her, filling any gaps in care with his own meticulous methodology.  She was a very well-cared for wife until her passing in 2017.  After her funeral on a Monday, he was back in his own home on Thursday, cable TV hooked up and ready to go.  He lived in his own home until his death last week.

He attended Mass at St. Pius X regularly, and the family has been in the parish since 1976.  With declining health, Snowmaggedon, and then the pandemic, he wouldn’t venture out.  He did receive the Eucharist weekly, and he firmly knew the truth of yesterday’s Gospel from John.  “Whoever eats of this bread will live forever.”

On the morning after he passed, I spotted two yellow warblers feeding together in a pine tree in our garden.  They lingered long enough for me to call my wife Anne to see them – a message that he and Mom are okay together.

It is then in celebration we gather today. I thank the staff at the Health Sciences emergency for making him so comfortable in his last moments, so that he passed peacefully rather than tumultuously at home. Let us try to look beyond our grief to his eternal happiness, going to the table of the Saviour.  Bon appetit, Dad, and if you’re lucky, it will be Mom cooking.”

If you want to know more about my father, here is a link.  He was good guy.