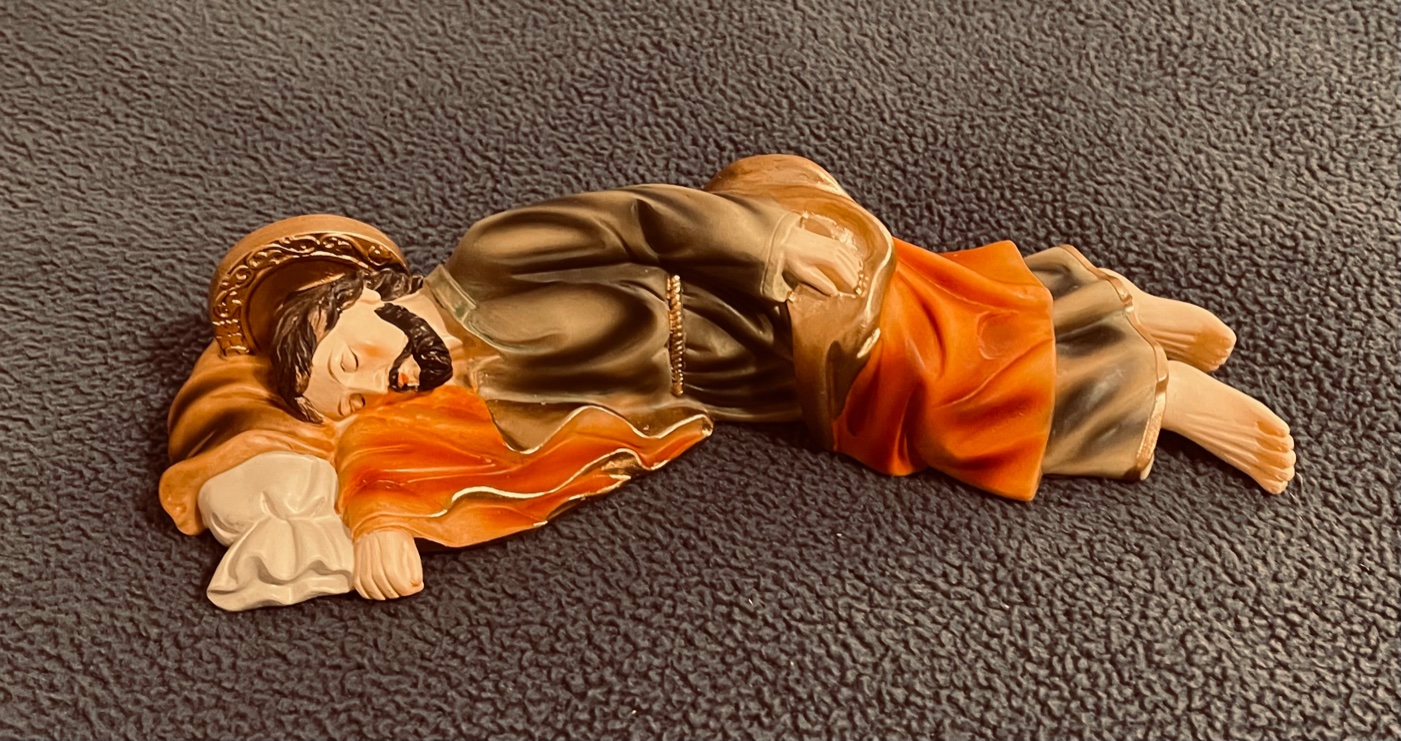 This summer on August 15 two  confreres, Joseph Schner and Terry Prendergast, and  I celebrated an anniversary, 60 years of being Jesuits! We three could not get together, but Joe and I celebrated the event with the Jesuits in Regina on the day itself.

On September 15, my Winnipeg community marked the occasion.  They presented me with a replica statue of a sleeping St Joseph.  Though not sure what prompted that specific gift, I am familiar with the prophecy of Joel   “And it shall come to pass afterward, that I will pour out my Spirit on all flesh; your sons and your daughters shall prophesy, your old men shall dream dreams, and your young men shall see visions” (Joel 2:28).  Perhaps a reference to my age?

Whatever.  The gift was timely, this year being dedicated to St Joseph.  I always associate him with his namesake, Joseph, who was sold into slavery by his jealous brothers, a man of dreams who finally recognized how his dreams and suffering were part of God’s plan to save his father and his entire clan.

What marks St Joseph in my consciousness is also his dreams and his participation in bringing about our salvation.  In a dream he is told to not fear taking Mary for his wife thus ensuring Jesus being born into the house of David and at Bethlehem.

In another dream he is told to take Mary and Jesus to safety in Egypt to escape the predator Herod, thus fulfilling another prophecy about Jesus, the Messiah.

Perhaps dreaming is my connection with him.  I know someone who regularly logs his dreams.  He has recorded thousands of them.  I do not collect and write down my dreams,  but I am conscious of them and log some of them mentally.

In recurring dreams when I was very young  I was  a fish, small and quick.  Being chased, I could easily slip into safe little nooks.  For many years later in my life, I had in my dreams the ability of flight.  I could fly.  It was a secret from the others in my dream though.  It was great fun.

Now in my later years a recurring motif is travelling– being on a journey somewhere using many different modes of travel, car, train, bus, plane, or simply walking.  (Just last night it was a motorcycle trip in Ireland!)

Sometimes I am alone in my dream but most often I am with someone else.  I know that sometimes the images in my dreams simply reflect some of the things happening in my life and so when I wake up I can identify their source.

Occasionally I have a dream of particular significance for me, a kind of revelation or realization.  Rarely I have a dream whose import is for someone else.  One of those happened many years ago during a three days pilgrimage to the Shrine of St. Ignatius of Loyola at his ancestral home in Spain.

It took me almost two years to drum up the courage to write the dream down and send it.  The person received it with great joy and consolation.

Poor Hamlet was afraid of dreams as he expressed in his famous soliloquy “to be or not to be”.  His thoughts about dreaming were terrifying.  “To die, to sleep— /To sleep—perchance to dream. Ay, there’s the rub!”

I am grateful to be blessed with dreams, not nightmares.  Curiously I look forward to them.  I am thinking the sleeping Joseph was an inspired 60th anniversary gift for me.