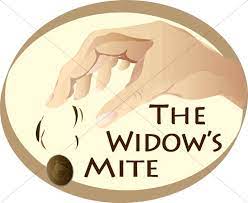 A few Sundays ago, we heard about the faithful remnant in Israel. I suggested that the blind beggar who cried out to Jesus was one of that remnant, the anawim. We are offered another illustration of that grouping today – the poor widow who is one of God’s faithful.

Impoverished widows feature prominently in today’s readings. First Kings recounts the story of a widow who provided food for Elijah the Prophet, despite the fact that she had so little and was about to prepare a final meal for herself and her son … “that we may eat of it, and die.” She was rewarded for her generosity. “The jar of meal was not emptied, neither did the jug of oil fail.”

Our Gospel includes the well-known image of the widow’s mite. “A poor widow came and put in two small copper coins, which are worth a penny.” Jesus explains to his disciples that “this poor widow has put in more than all those who are contributing to the treasury. For all of them have contributed out of their abundance; but she out of her poverty has put in everything she had, all she had to live on.”

Two mites (Greek lepta) are together worth a quadrans, the smallest Roman coin. A lepton was the smallest and least valuable coin in circulation in Judea, worth a few minutes of an average daily wage.

Jesus contrasts the generous widow with the scribes who “devour widows’ houses and for the sake of appearances say long prayers.” The widow “put in everything she had, all she had to live on.” The story of the widow provides an illustration of putting our money where our heart is.

I recently read about a wealthy woman who has spent her life supporting artists. She is now getting older and has health issues galore and has given most of her money away. She has started to sell off her paintings and other possessions, so that she can continue to support artists (and get home care for her failing body). She is not exactly impoverished and her contributions are hardly mites. But she is putting her money where her heart is – others.

We continuously hear accounts of groups of refugees and migrants, traveling together to a place of safety and welcome. Remember that caravan from a few years ago, weaving its way through Honduras and Mexico, hoping to find a welcome in the USA.

I am sure that the spirit of the widow is very much alive – people, mostly women probably, who are daily giving to others all that they have to live on. It might be food or companionship or solace or a simple embrace. They give out of their poverty. I’m certain that refugee camps are marked by the presence of the anawim.

Having a religious vow of poverty, I don’t have any money. However, if I did, I would give most of it to research at Sunnybrook Hospital in Toronto. I have survived two brain tumours and both were treated at that hospital. I’m also grateful for their cochlear implant program, which allowed me to re-join the land of the hearing. Sunnybrook is not the only place where my heart is, but it’s high up.