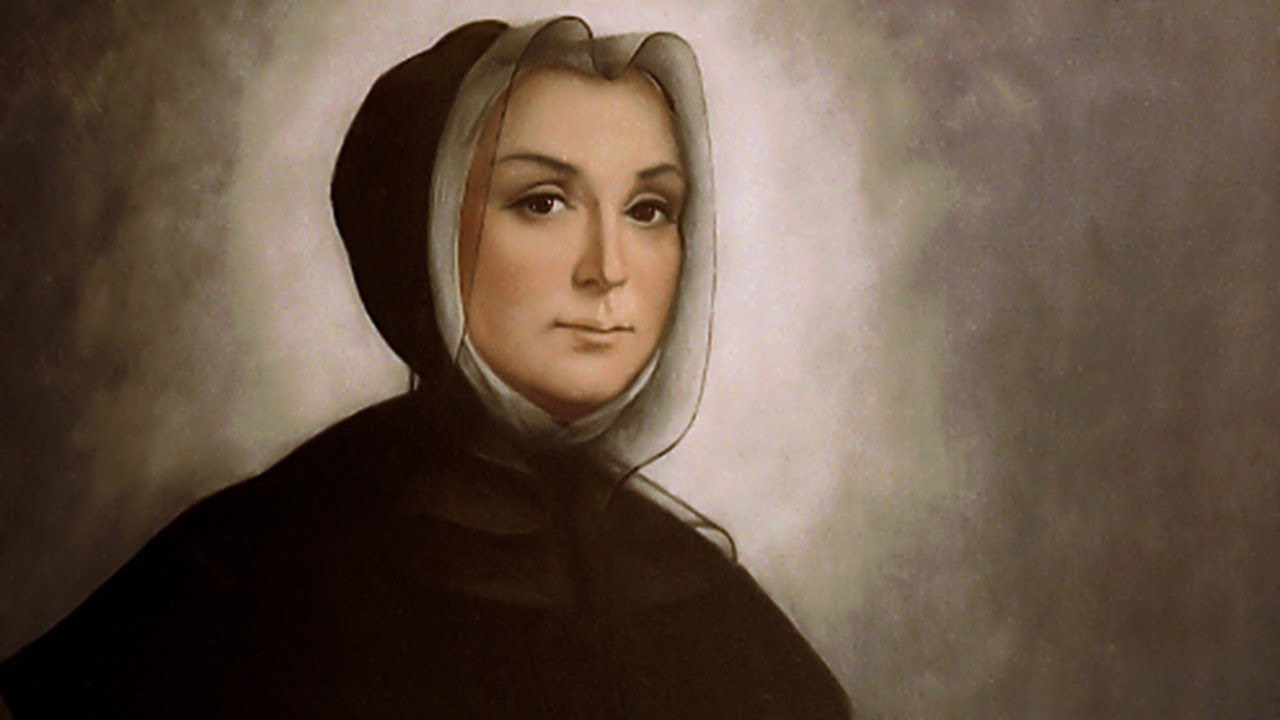 “Out of her own poverty, she helped the needy.” Thus, the Catholic Encyclopaedia sums up St. Marguerite d’Youville, the first Canadian-born person to be elevated to sainthood. She was beatified by Saint John XXIII and canonized by Saint Pope John Paul II in December 1990. St. Marguerite’s feast day is October 16.

She exemplifies the Christian way of responding to stressful situations in family life. Marguerite rose above childhood poverty and a difficult marriage and responded to her challenges with charity. She was not motivated by self-pity about her situation, but by compassion for all who suffer.

Marie-Marguerite Dufrost de Lajemmerais was born in Varennes, Quebec on October 15, 1701, the eldest of six children born to Christophe and Marie-Renée (Gaultier).

Her father’s death in 1708 drove the family into a life of poverty. The kindness of relatives allowed her to study with the Ursulines in Quebec. Once she returned home, Marguerite was an invaluable support to her mother and helped with the education of her brothers and sisters.

Marguerite married François d’Youville, a man who sold liquor illegally to Indigenous Peoples, in exchange for furs. He was selfish and frequently left home for long periods. They had six children before François died, leaving Marguerite a widow.

By age 29, she had experienced desperate poverty and lost her father and husband. Four of her six children had died as infants. She was also left with enormous financial obligations.

In all this, she found strength in God. Her Vatican biography explains, “In all these sufferings Marguerite grew in her belief of God’s presence in her life and of his tender love for every human person.

She, in turn, wanted to make known his compassionate love to all.” She dealt with the family’s financial difficulties, took on charitable works, welcomed a blind woman into her home, and provided for the care of her two remaining sons (both of whom later became priests).

Several young women, who had similar compassion for the poor, joined Marguerite in 1737. They consecrated themselves to God and dedicated themselves to service of the poor and needy. They provided housing for the poor. These women were the start of the Sisters of Charity of Montreal, also known as “Grey Nuns,” a name that started as a derogatory term.

They were sometimes mocked and called “tipsy women” because of the d’Youville’s alleged profits from bootlegging. They were slandered and persecuted, accused of being drunkards and prostitutes. But the women continued to serve the poor through the spiritual and corporal works of mercy.

Within several years, the women became a formal religious order. In 1747, they were given charge of the bankrupt Hôspital Général of Montreal. The women reorganized the hospital and secured financial stability. It was used as a hospice for disabled soldiers, the aged, orphans, foundlings, the insane, the incurable and “fallen women.”

They set up a series of projects to finance their work of service to the poor. Among the projects was making clothing for traders. Regardless of the hospital’s own financial situation, the women never turned away someone in need. Marguerite really was “the mother of the poor.”

When the hospital was destroyed by fire in 1765, Marguerite’s faith gave her the strength to rebuild it within a few years.

After a period of failing health, she died on December 23, 1771. Within a short time, people were talking of Mère d’Youville’s miraculous healing powers and her spirituality of charity in the face of sacrifice.

A former superior general of the Grey Nuns sums up her foundress as a woman who overcame insurmountable obstacles, showed the faithful love of a wife, was a dedicated mother, a strong and committed widow, a fearless and compassionate foundress of a religious order, a woman with a deep sense of justice, and an unshakeable love of Jesus Christ and the poor.

St. Marguerite’s thirst for serving Jesus Christ in the poor motivated many women to join the Grey Nuns. Her name lives on in the Sisters and their works on almost every continent, in churches, schools, women’s shelters, and other institutions.

She is the patron of widows and difficult marriages. She said, “We must do all things well. We are servants of all for the sake of the poor. Everyone must know that we never refuse to serve.” Let us pray through the intercession of the saint whom John XXIII described as the “Mother of Universal Charity,” for the unfortunate and painful situations faced by many in our world