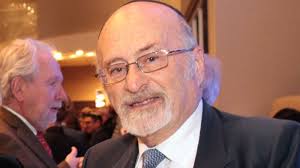 At his passing, Rabbi Reuven Bulka was hailed as “Canada’s rabbi.” I liked to think of him as my rabbi as well.

He was, as well, a friend and a colleague in ministry.

As a Jesuit priest and professor at Regis College at the Toronto School of Theology and in association with the University of Toronto, I was well acquainted with the Hebrew Bible, the New Testament and the world of intertestamental literature.

That may have been why the Archbishop of Toronto named me to the Christian-Jewish Dialogue of Toronto on which I served happily for fourteen years (1981-95), two of them as co-chair.

Christians and Jews dialogued, argued, wept and rejoiced together during those times. Christians and Jews, we have had painful relationships over the centuries but thankfully channels of communication have been opened up in recent decades.

Moving out of the world of academe, first as an auxiliary bishop in Toronto (1995-1998) and then as an archbishop in Halifax (1998-2007) changed the amount of time I had available for interfaith activities.

I entrusted most of the responsibilities in these spheres to collaborators who had training in interfaith relations and who would keep me informed and ensure that I take part in significant occasions such as lectures at the Atlantic School of Theology or observances such as memorials of Kristallnacht and Holocaust Remembrance Week.

When I came to Ottawa in 2007, my director of Interfaith Relations here invited me to a meeting of leaders of various faith communities; there I met Rabbi Bulka for the first time. As he had an effusive and engaging personality, it did not take long for us to strike up a conversation and agree that we might want to collaborate on addressing community issues.

Having begun to read Rabbi Bulka’s Saturday columns in the Ottawa Citizen under the heading of “Ask the Religion Experts”, I experienced a sense of fellowship with his thoughtful and practical approach to faith questions. When he reflected as a chaplain each Remembrance Day at the cenotaph I had no difficulty in saying “Amen” to his message and his prayer.

And, of course, Rabbi Bulka’s horizons were always expanding as he reached out constantly to include other pastors and religious leaders, in particular an imam. Thus it was that he and I and Imam Samy Metwally would reflect together on issues such as the proposal for legal measures to permit assisted suicide or euthanasia, which our religious traditions found abhorrent.

We also wished to urge protection for medical personnel so they could refuse to participate in medical procedures that violated their conscience.

When acts of violence or hate-based gestures hurt members of other religious confessions, we made common cause in supporting the offended communities.

We also shared each other’s joys. When the Canadian Jewish Experience exhibition was launched as part of Canada’s sesquicentennial, I was pleased to attend. Later, by arranging for the exhibition to be shown for two weeks at the Ottawa archdiocesan centre, we permitted Catholics and others to have an opportunity to view it.

When the Archbishop of Riga, Latvia visited Ottawa and expressed an interest in learning about our interfaith activities in Ottawa, I was honoured to welcome Rabbi Bulka and other faith leaders to the Archbishop’s Residence.

Rabbi Bulka’s enthusiasm for the manifold acts of kindness that human beings can perform for each other led him to promote the establishment of “Kindness Week”, working with school children to establish patterns of kindness early in life and extending it widely to other members of the civic community.

To bring this home, he invited faith leaders and school children to join him at the international airport in welcoming visitors (or those returning home) to Ottawa with a warm greeting and the gift of a chocolate wrapped in gold-coloured foil.

Kindness Week activities take place in the third week of February. Initially it was to be on Wednesday. However the first occasion would have fallen on Ash Wednesday; I said, “Rabbi that’s like giving out candy on Yom Kippur”. So we moved it to Tuesday—Mardi Gras—a festive day for Catholics.

Our last project together fell a few weeks after the 2020 Kindness Week. It was an initiative to invite people of faith across Canada to pray for an end to the Covid-19 pandemic, for those researching a cure, for the front-line medical staff who were overwhelmed with patients in need of care and for truckers and grocery store clerks and any others putting their lives on the line. We collaborated on its composition and I oversaw a French translation.

Through our joint efforts and invitations posted on social media, many thousands of Canadians joined in the prayer we had composed and which we recited jointly from the grounds of his synagogue: he in English and I in French.

I was very sad when I learned earlier this year of his cancer diagnosis and kept him in my prayers and thoughts until his passing. We are the same age (I am a few months older) and I sent him a message for his easy-to-remember birthday (he was born on D-Day). His reply, even at that difficult time in his final illness, was cordial and respectful. I shall treasure it.

May these recollections and those of many others ensure that the memory of this man of God remain a blessing to all who knew of him or had the pleasure of meeting him.