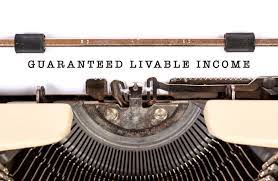 The facts below, most of which I gleaned from watching a couple of recent webinars on the need for a Guaranteed Liveable Income (one of which was given by the Jesuit Forum) have prompted me to repeat them here. Particularly during a pandemic, it is easy to forget those who are worse off than we. But the needs remain and they are real. And things get worse during a. pandemic.

To begin with, ten percent of all Canadians live below the poverty line. Thirty-five percent of these are First Nations people. Basic needs which we all face include shelter, food, heat and clothing. Those who live in poverty often must chose which ones of these they can pay for.

A Guaranteed Liveable Income would close this gap. Most of the people in need of medical care are poor which leads us to conclude that poverty itself causes illness and even death.

Two out of three Canadians support a Guaranteed Liveable Income plan, demonstrating the reality that good will is not lacking among Canadians. Although the cost for a federal Guaranteed Liveable Income is significant, it is not prohibitive. “National and international evidence suggest that it would cost no more than 1% of GDP.” * The benefits of a GLI outweigh the current difficulties many are undergoing. The only things lacking are political will and trust in those who appear to be different from us.

A Guaranteed Liveable Income plan would make it possible for more Canadians to get job training, education, participate more fully in their communities and have resources made available to them which would facilitate a more dignified life rather than one which is stigmatized. Those of us in support of a G.L.I. would urge its implementation to be delivered with a minimum of bureaucracy. In order to close existing financial gaps its initiation would occur alongside other social supports including healthcare, pharma care, pension and educational supports

One of the ways to show support for this plan is to write letters to our government officials, including one’s Member of Parliament, the Minister of Finance and the Prime Minister.

If you feel this cause is one you would like to contribute to, feel free to move forward with the information above. Below are the addresses of the Prime Minister, the Minister of Finance and how to google the address of your Member of Parliament, if you don’t know it already.

Congregation of the Sisters of Mercy of Newfoundland

Office of the Prime Minister

Grace Colella graduated with a Masters in Arts and Ministry in Spirituality degree from Regis College where she also trained as a Spiritual Director. Her love of people, nature and music inspires her to write poems.