“No one ever steps in the same river twice” – 23rd Sunday in Ordinary Time. 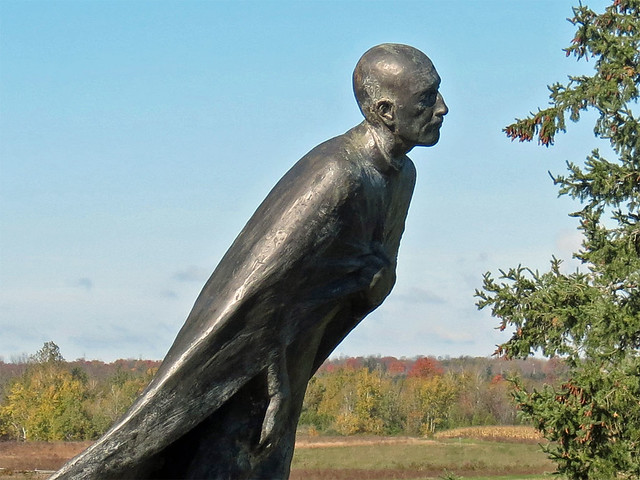 The Prophet Isaiah offers helpful advice for us as we strive to live with a modicum of peace in the strange and confusing world in which we live. “Be strong, do not fear!” I’ve been thinking a lot recently about how we find that place of peace, strength, and fearlessness in this tumultuous world.

Each 24-hour news cycle seems to bring to the fore new shocks, scandals, disasters, dire warnings, and fears. Those thoughts of mine about the search for peace were heightened by receiving an invitation to offer an article on Ignatian spirituality for a world in flux.

Flux! That word takes me back to my initial encounter with Heraclitus of Ephesus, a pre-Socratic Greek philosopher. He was noted for his strong insistence on ever-present change as being the fundamental essence of the universe. This is summed up in the line famously offered in his writing: “No one ever steps in the same river twice,” the point being that the river keeps moving along.

A phrase that is used by Zygmunt Bauman, the Polish-British sociologist, sums up our present world that is so marked by change. He writes of liquid society. Change and flux is occurring more and more rapidly in Western culture. Bauman adds that the culture is marked by fragility, temporariness, vulnerability and the inclination to constant change.

I have long-found all is flux to be a defining statement for me as I approach reality. My understanding of Ignatian spirituality has helped with that. Ignatius of Loyola saw interior movements in a person as being at the heart of his discernment techniques. He would not trust stasis.

He even says that if a person doing the Spiritual Exercises says that nothing is going on, we should ply the person with questions. Surely something is happening within me. The challenge is to discern God in the movement. I find that this liquidity is not just in my interior. It is a defining characteristic of contemporary culture.

One of the principal experiences of contemporary flux is that we can no longer rely on any institution to provide moral leadership and authority. There may be a few individuals who provide such authority. Pope Francis makes many lists. But there are limits to his authority. He may lead the Roman Catholic Church, but his voice doesn’t hold much sway over the increasing numbers of nations and individuals who are clamouring for their rights, often involving their bodies.

I don’t think that a certain level of flux is so terribly novel in Western culture, though it is probably safe to say that the present level of constant change is unprecedented in living memory. We are often adapting to a new normal, perhaps now more than ever. Ignatius is comfortable with that dynamic.

The image of St Ignatius that has moved me for more than forty years is a sculpture that stands outside Loyola House, the Jesuit spirituality centre in Guelph, Ontario. Ignatius the Pilgrim, by the Canadian sculptor William McElcheran, portrays the forward stance of Ignatius as he moves into the wind. His sense of movement is accompanied by his solid rootedness (metaphorically in his rootedness in Christ, literally in the concrete base beneath the sculpture). McElcheran describes his image of Ignatius:

“Ignatius is probably the prototype of the modern Christian; going forth into the world carrying the cloister about his heart – a very large cloister that has room for the whole of creation. The winds of change are not merely the forces of evil, but nevertheless, the hand that clutches at the cloak is opposing the destructive power that accompanies them.”

Yes, there is constant change in the culture in which we dwell! But Isaiah’s advice to be strong and fearless invites us to find our rootedness in something inside us, so that like Ignatius we can move forward in peace.

This Sunday in Ordinary Time falls on the long weekend that acknowledges Labour Day in this part of the world. Today’s Gospel offers a good account of the labours of Jesus, with the healing of a deaf man. May our own labours be rooted in the work of God!