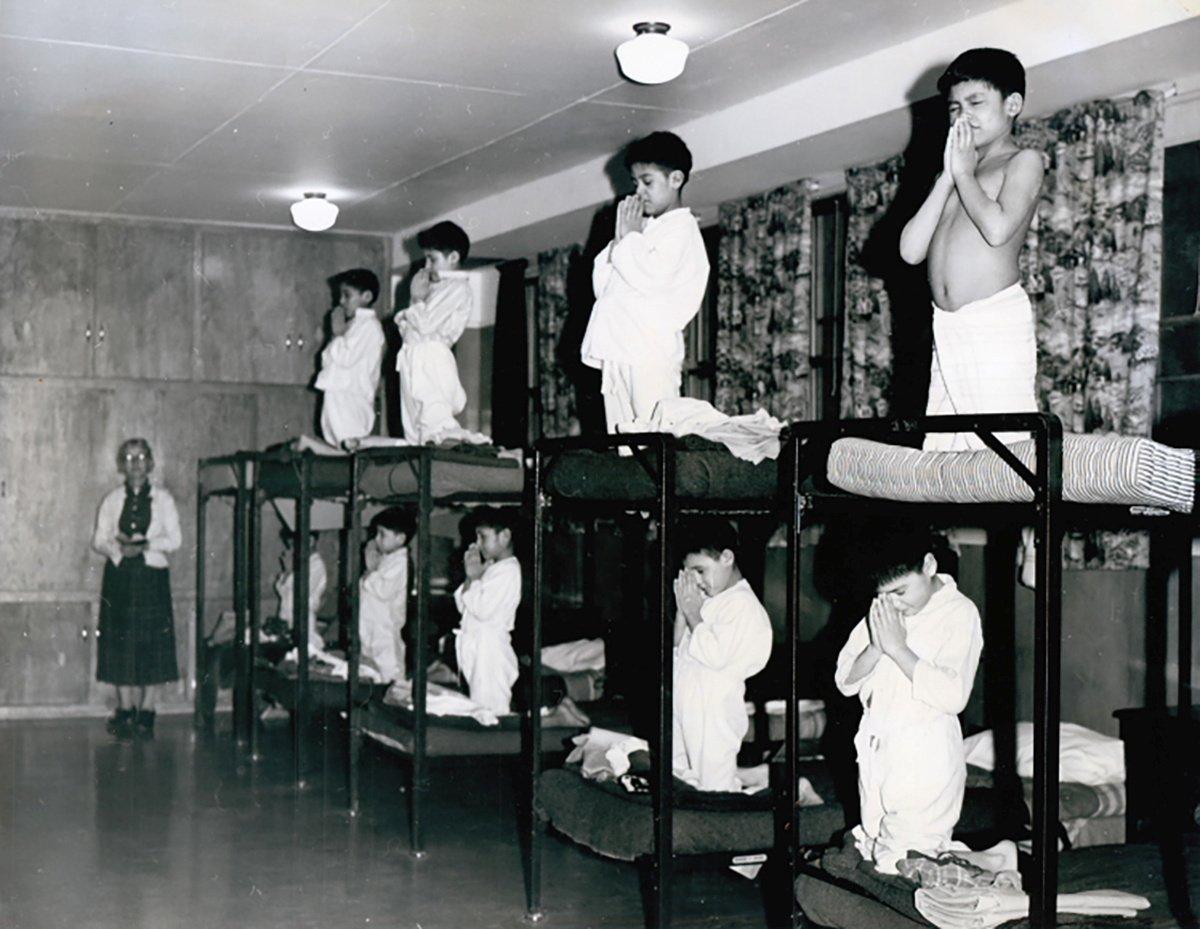 “Isabelle Knockwood, born in Wolfville, Nova Scotia, attended the Indian Residential School in Shubenacadie from 1936 to 1947… At the age of fifty-eight, she enrolled at St. Mary’s University in Halifax seeking a major in Anthropology and a minor in English; she graduated in 1992.” These are some biographical details from the back cover of her account titled Out of the Depths. The Experiences of Mi’kmaw Children at the Indian Residential School in Shubenacadie, Nova Scotia.

First published in 1992, Knockwood based her history on interviews with forty-two of the students and her own dozen years in the School. She updated her book three times; the fourth edition (2015), from Fernwood Publishing, adds a chapter on the reactions of 21 survivors to the government apology in 2008. Isabelle Knockwood died last July at the age of 89.

Knockwood provides balance. She recounts the horrors told to her by the survivors, but also the better moments of kindness and play; she includes statements by some survivors who compliment the School. But the litany of cruelty is overwhelming and bizarre, as if a critical mass of School leaders and staff had been chosen for their sadism and the ability to hide it. And this cannot be blamed on 19th-century thinking: the school opened in 1930.

Here are three examples. The school had baseball equipment, and the priest substituting for the principal who was ill at the time organized the best players into a team that beat the teams in surrounding towns, including much older players. When the permanent principal returned, he was furious that the Indigenous kids were showing up the white neighbours and disbanded the team.

This was the same priest who hid the new shoes and clothing supplied for the children; they did not deserve them.

Some money disappeared one day in 1934; the older boys spent it in town for treats for all the children. Unable to pinpoint the thief, the priest flogged all 19 older boys so severely that the Indian Agent lodged a complaint. The issue became public and led to questions in the House of Commons; there was an inquiry and then a hearing three months later. The lawyer representing the boys defended the priest, who claimed that the punishment was restrained, even though the marks could still be seen on the boys’ backs, and one boy who was beaten had had a kidney removed two months earlier.

The Halifax Herald joined in praising the priest and all his defenders. But despite an outcome that defended the system, all associated official records have disappeared.

These illustrations are far from the most lurid and cruel details in Out of the Depths. I have selected them because, in their oddity, they help convey the hostility that some of the people in loco parentis felt towards the Indigenous children in their care.

In Mark Abley’s Conversations with a Dead Man: The Legacy of Duncan Campbell Scott (2013, Douglas & McIntyre), the ghost of Duncan Campbell Scott is troubled. Instead of being remembered only as one of Canada’s major “Confederation poets”, he has heard in the afterlife that now he is being vilified for his day-job as the long-time head of the Department of Indian Affairs, overseer of the Residential Schools.

So he visits a Canadian journalist-poet (Abley) to seek help in restoring his reputation. During eight more visits, the ghost hears what the journalist’s research has turned up, defends himself against accusations, and debates Abley over the present-day interpretation of the facts of the past. There is a lot of ‘That’s what the policies and attitudes and conditions were in those days’ and ‘I was just doing my job’, but ultimately the ghost concedes that he should seek forgiveness.

Using the tools of creative non-fiction (imagined conversations mingled with a good deal of research-driven factual prose), Abley covers an immense territory, as needed to shed light on the bewildered question today – What were they thinking? – regarding the policies of John A. Macdonald and other creators of the Residential Schools. He also brings Scott to life through biographical details and extensive use of Scott’s poetry. This complexity, rather than caricature, gives the reader a sense of getting closer to the reality.

Abley deals especially skilfully with the death of Scott’s only child at the age of 11 in a boarding school in France, probably due to improperly treated scarlet fever. He creates an extended conversation with Scott’s ghost about the deaths of children in the Schools, searching for empathy.

What I find valuable in these two books is how they listen and observe. Instead of beginning with judgment, they present portraits of the situations and people directly involved – in Knockwood’s book, the children, nuns and priests, and to a smaller extent the children’s families and communities; in Abley’s, those who launched and controlled the system. The authors try hard to present the Truth, which is essential to Reconciliation.