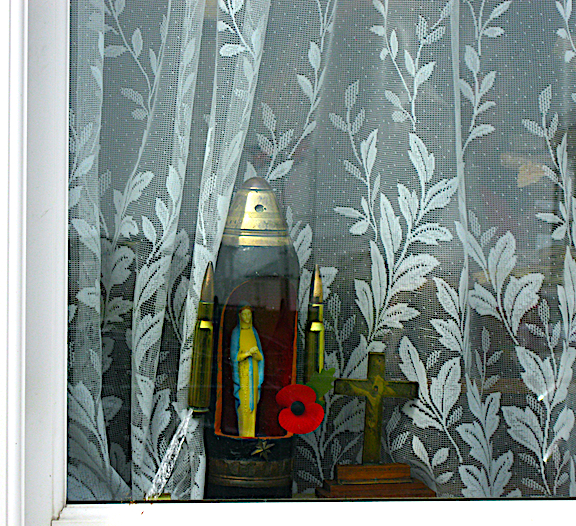 “…so Jesus is our true mother…”- Julian of Norwich

If you think you’re Jesus and you’re a woman, you’ve got issues. Janice knew she’d have to fend off curious hypocrites when she realized that she was an emanation of the Son. It happened on Indian Beach in Florida. It was an inkling that grew as the gulls swooped around her one sweltering July afternoon. The sensation arrived again on a cooler evening in the English countryside, closer to her home.

“Why is it that on holidays you get a sense of who you actually are?” she had asked her sister when she got home. June, who was a few years older, had never really indulged in holidays. She sniffed and turned the page of ‘The People’s Friend’ magazine she was leafing through.

“If you don’t know who you are I suppose you’ll keep discovering pieces of yourself all over…” she offered eventually. She knew her silences made her sister nervous. She enjoyed that. Janice’s flighty nature exhausted her. She hoped to wear her out enough with worry to get her settled for a little while.

“The greatest thing is I have clarity now on all sorts of things. For example, when you’ve insisted that one must attend to only one task or project at a time to truly enjoy a sense of purpose and accomplishment, I’ve always believed you.” June looked up over her bifocal lenses, raised her eyebrows and sighed. “All my little endeavours felt so silly with your idea of achievement in mind.” Janice looked away from her sister before making her point. The other side of her face was very different from the one she so often presented to her sibling. She had discovered that in the Sunshine State too. “I’m always talking to her from my passive, flowery face. June needs a little more of my passionate, determined visage,” she had mused when her two sides had become so plain in the angled mirrors of a fitting room in a fancy Florida dress shop. Eyeing herself in a tie dye sundress she looked one way and was like a waif in rags in a faded painting while her opposite profile revealed the fiery eye of a woman on a mission in a flowing gown.

”All I ever said was, if you do too many things you’ll never finish all of them and you won’t feel the satisfaction of one task simply done with elegance. Elegance, Janice.” June repeated, knowing full well that her sister would likely never know the least bit about the word let alone what it described.

“Well, I have it from the source, the Father of, that He actually goes about all over the place attending to all sorts of little things here and there and gets a great deal accomplished- on the whole, so to speak!”

June stared at the page she had stopped on. It was a story about a family from Africa who lived in a council house who had adopted a lamb. There was a dainty drawing of the little sheep frolicking in a cluttered living room with the mother, father and children all looking on in wonder. “Oh, God does indeed move in mysterious ways“

“Her wonders to perform!” Janice saw her opening. “I don’t mind telling you. I’m it. I’m the one. I just knew on that last afternoon of my holiday. Somehow it was as if the twelve seagulls who had been diving and rising all round me on the beach were there to reassure me like the Apostles did… er, do… as they praise him… er, me. Your know, by their encouraging acts! I suppose it all comes down to relaxation. That’s when you get a sense of who you really are. After all I do rest a lot- just like Jesus- my very self!  Think of all the times he justly reminded the fretting fold who kept hounding him that all would be well so that he could resume his siesta. Now I understand why I need to take holidays on a regular basis. They are my brief sojourns in the healing embrace of Heaven. They restore me so I might resume my works….”

June put down her magazine and turned to look at her sister. For the first time she saw passion. Sitting up in her lounger she was startled at the sight of an aspect of her flesh and blood that she had never seen before. “Good Lord, Janice, are you actually comparing yourself to the man who was Jesus?”

“Not comparing! I’m having an epiphany; a ‘being-baptized-by-John the Baptist’ experience! The seagulls were like doves who came down… or, yes, Apostles. Well they were both both really, weren’t they? And all my deeds make sense now.”

June shook her head as she stood up. She folded her magazine under her arm and picked up the tray that held their empty teacups. As she walked away from her sister she felt a searing heat entering her body. She’d been cold all her life, always getting too close to the electric heater and ending up with chilblains in the dreary Sheffield winters yet now for the first time on a December evening she felt fiery warmth.

“You are healed my dear sister.” Janice announced. And turning to respond, June was confronted with the sight of her one and only family member, the person who had truly cared for her all her adult life. Yet Janice was no longer the annoying frilly old thing who forgot to bring the washing in from the line when it rained. She was now transfigured. Standing by their mantle which was cluttered with old pictures of all the relatives who were no longer with them, Janice’s eyes burned bright, her complexion had an incandescent glow. The pale pink frock she always wore was somehow radiating a shimmering light.

Janice smiled a beatific smile. “It’s alright darling. I’m just one variation on the theme. You’re not the only woman whose sister is Jesus. Everyone’s got issues who live with them.” At that, Janice drifted up and out of the window waving as she’d watched the Queen do on so many television broadcasts of the Royal family’s comings and goings.

“There goes Christ the King.” A white Persian cat on the sidewalk said to a scruffy little terrier being dragged along by its harried owner.

“Or Chrissie the Queen!” The dog growled back as his paws skittered along the pavement. And the old man scurrying towards home and the tea his younger brother always made for him, scowled at the cat

Above them both June was standing looking out her second story window alone. Her sister was now a bright spot in the sky rising up into the setting sun. For the first time in her life June cried and felt relief. She knew her sister was free, that there was a God, and that she’d be able to bear the funeral that was to be held the following day.

Caressing the gold crucifix that rested on her clavicle, June saw her own reflection in the window pane. “When Jesus lets a woman be too much a part of his presence he’s got issues to sort, God.”  And she wondered if she might ever have a tête-a-tête with the maker she believed had tortured her sister so…