Mystery Part II: The Mystery of My Vocation 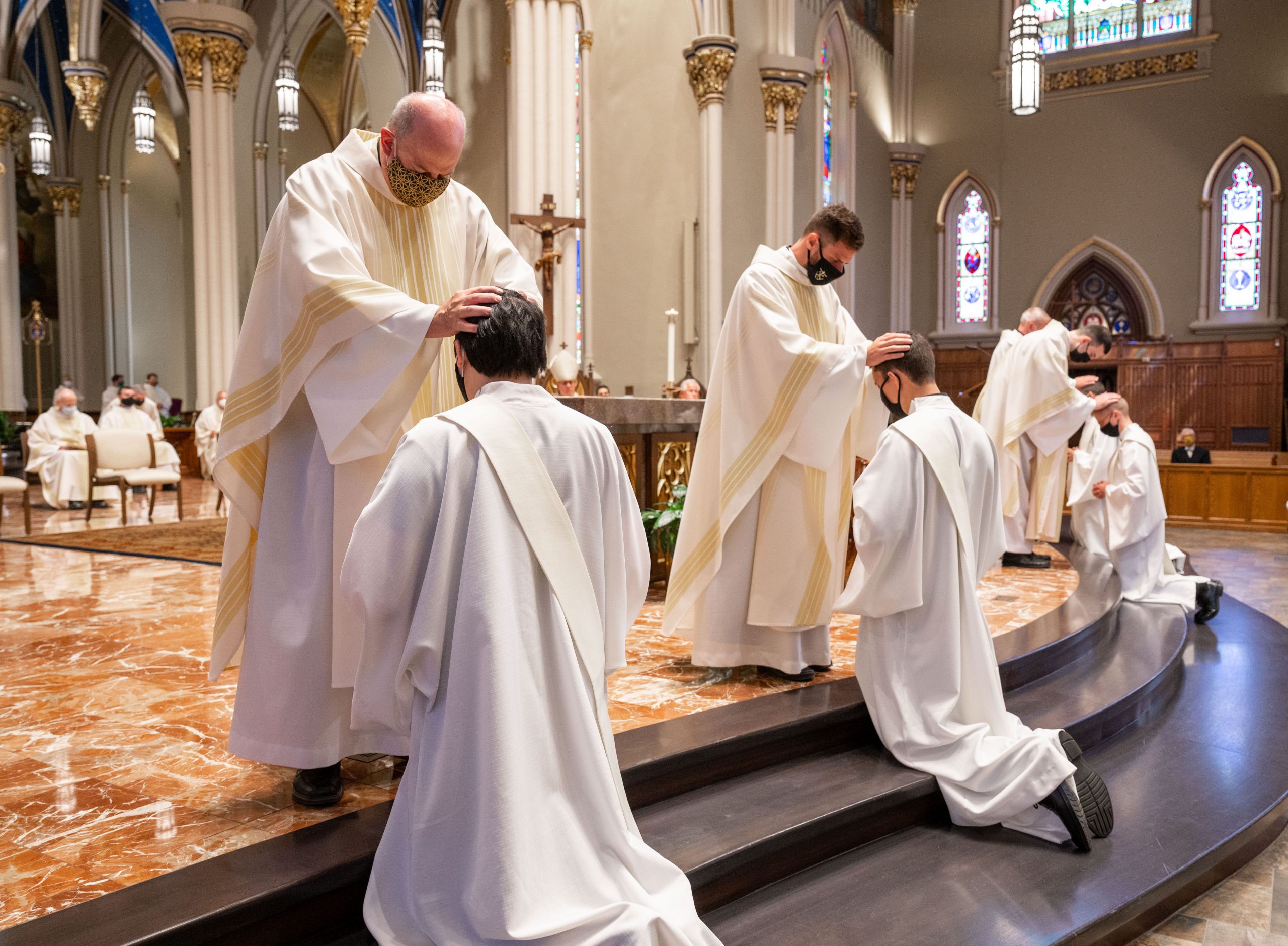 While I owe my catholic baptism to my unbaptized father, in some mysterious way I owe my vocation to the Catholic priesthood to my Anglican mother.

One of the richest memories of my childhood is of my sister and me lying with my mother on her bed while she read to us from the storybooks and rhymes that we loved, or from Alice in Wonderland and Through the Looking Glass. My mother had grown up in poverty and her schooling stopped at grade three, but she loved to read to us aloud and she did it beautifully. Whenever she recited,

Upstairs, downstairs, in my lady’s chamber,

There I met an old man who wouldn’t say his prayers,

So I took him by the left leg and flung him down the stairs,

I would laugh with delight (I think it was “the left leg” that got to me). As I look back I now realize that it was my mother who gave me my love of poetry and English literature, which I later went on to study and to teach. And, of course, my mother had agreed to have me baptized in the Catholic Church rather than in the Anglican Church, and it was she who sent me to Catholic schools and to a Catholic church every Sunday. For all this I am deeply grateful.

Another key moment was when, in grade six, I trained to be an altar server and learned to rattle off the responses in Latin so that I could serve at the seven o’clock morning Mass. I distinctly remember my mother warning me, “Don’t let them talk you into becoming a priest!” The thought had never crossed my mind, but afterwards I thought about it continually. In grade ten I decided that this was what God wanted, and at the end of my high schooling I announced the decision to my parents. For two weeks my mother wept quietly into the porridge every morning as she stirred it for my breakfast, but I knew I could not let her tears dissuade me.

Something I was not aware of at the time was that I began to distance myself from my mother when I decided on my vocation, and in doing so I hardened my heart. Perhaps it was part of the natural process of an adolescent male growing independent of his mother. It was also a reaction to what I felt was my mother’s desire to keep me as her little boy. She would often say things like, “You were so cute when you were three,” as though it was all downhill after that. Whenever she wrote to me later, even in my forties, it was always to “My darling little boy.” Imperceptibly my heart became a stone and I lost all feeling for her. In my later years, when I became aware of this, I began to pray with the words of Ezekiel (11:19), “I will remove the heart of stone from your flesh and give you a heart of flesh,” asking God to perform a sort of spiritual open-heart surgery on me. This gave me hope that I could still grow and change, and that my heart could soften.

I went on to study at Loyola College in Montreal, and my contact with some fine Jesuit teachers solidified my calling to join their ranks in the Society of Jesus. After I graduated, I decided to extend my discernment for a year by teaching at Catholic High, where I had once been a student – it was an independent school and I didn’t need a teaching certificate. The following summer I went back to Belgium to visit my Aunt Nelly and to see my godfather Eric. A lot happened in the course of that summer, during which I questioned my vocation and decided I was going to marry the girl I had come to love during that year. But God had other plans, and in September I entered the Jesuits after all. I was twenty-two years old. Looking back yet again, I see that, in a strange and mysterious way, I also owe my Catholic priestly vocation to my Anglican mother. She lived to be ninety-three years old.

It is sometimes said that we form our image of God from our experience of having a father. While I loved my mother when I was a child, I came to identify more and more with my father as I grew up, especially after visiting his home in Brussels when I was fourteen. The love of my Aunt Nelly seemed almost to displace my need for a mother’s love. While my mother gave me my delight in poetry, it was my father who encouraged my talent for drawing and painting, and when I was twelve he gave me a set of oil paints and brushes in a beautiful wooden case. He also told me that he would never discourage me from following whatever career I wanted. His own father had insisted he study engineering, which he hated, and from which he was liberated when the university closed at the start of the First World War, and so he left me free to choose my own path.

I don’t think my parents were well matched, having come from very different cultural and economic backgrounds. My mother was beautiful and my father was charming, and so they fell in love and married, my father being then about thirty-eight years old and my mother about thirty. She soon discovered that she didn’t have the energy required to raise two rambunctious children. When I was four years old I remember her screaming, “I don’t want any more kids!” We kids were the only ones present at that moment. Some while after that, my parents moved into separate beds and separate bedrooms. I suspect that it was entirely my mother’s decision, but my father somehow accepted it. It could have spelled the end of their marriage. I remember only one serious argument they had, with my father storming out of the house using the F word – the only time I ever heard him use it. I asked my mother, “Is daddy coming back?” She assured me that he was, and, of course, he did. I don’t know what contraceptive methods my parents may have tried, but my Anglican mother opted for the only one approved by the Catholic Church: abstinence.

We had many happy summers together at rented cottages by lakes in the Laurentian Mountains, which my sister and I shared with school friends. Our proxy-godparents, Aunt Stella and Uncle George, as we called them, usually summered nearby and were often present at family gatherings. And so I grew up in what seemed a happy family, and I never had to deal with the tragedy of divorce. As a priest, I have seen the effects of divorce on many married men and women, and I suspect that the wounds on their children, though different, may go even deeper, shaping their sense of the future and their trust in life and in love.

Both my parents have gifted me in different ways. I believe that a father’s most important role is to affirm his children, especially in adolescence – to somehow let them know that they have what it takes to face the future. I feel that my father did this when, in sending me to Belgium at the age of fourteen, he gave me a little pipe his father had given him when he was fifteen (together with two packs of Imperial Mixture tobacco). It was a rite of passage into adulthood. I am deeply grateful that I had a good and loving and affirming father, one who blessed me in many ways besides the blessing of my baptism, though that was the key that opened the door to all the other blessings. He died at the age of ninety-six.