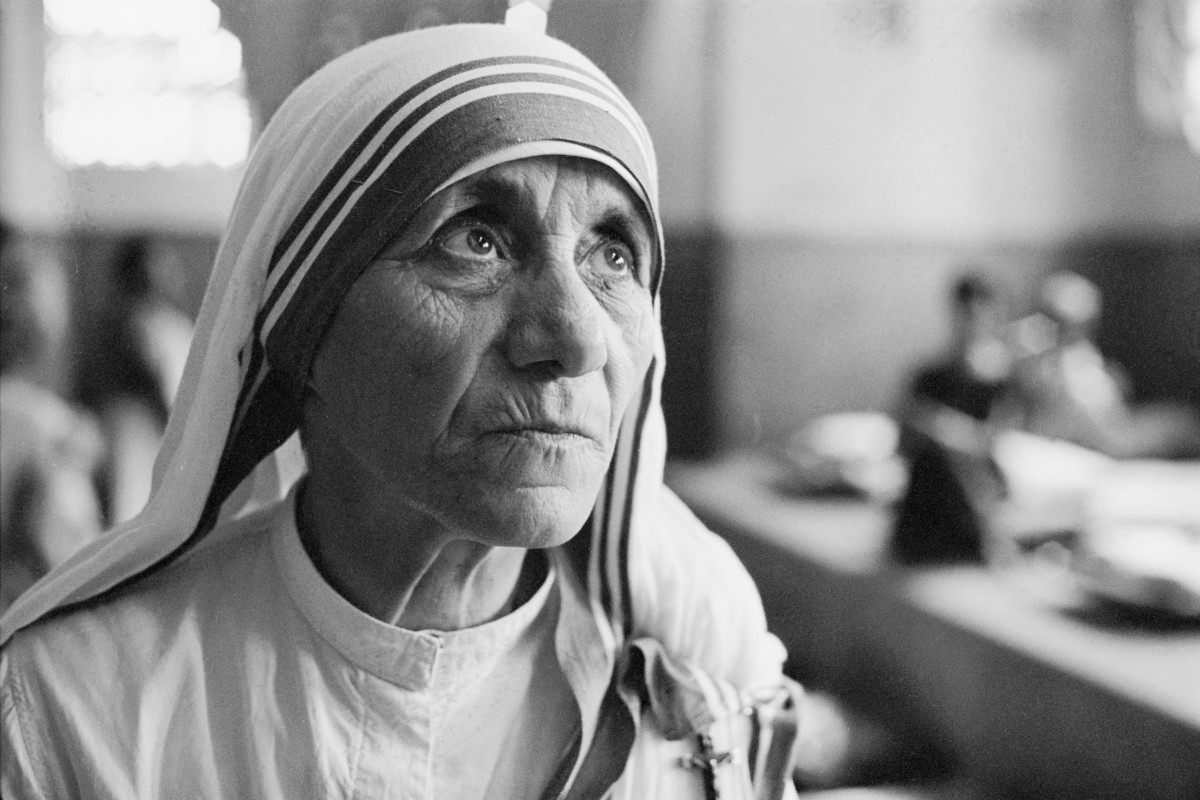 I was walking through the streets of Calcutta on my way to Mother Theresa’s Home for the Dying where I would be helping out for a few days.  These streets were vibrating with so much life that I actually lost contact with my nervousness about where I was going and what I was about to do.

After having breakfast with Kashi, Christopher, Madhu and my other friends in the l’Arche home where I had been staying for the past week, I step out of that joyful and peaceful house (at least for that morning)  into the tumultuous atmosphere in front of the Sealdah train station through which pass daily over 800,000 people.

Besides the constant flow of business men, labourers, families there were many porters shuffling along with huge burdens on their heads: great baskets full of bananas, apples and other fruits and vegetables; huge sacks of rice or whatever, other materials and large boxes full of who knows what.  The red loin clothes and red bandanas worn by these porters highlighted their dark sinewy bodies glistening with sweat.

I watched four of them straining to lift a great round basket full of eggs which they lowered onto the head of a fifth one who had stepped under it.  He took a moment to steady himself then started off with a rhythmic trot right into the flow of busy traffic.  Others pushed and pulled at wagons loaded with tons of coal, cement, lumber etc., etc.

Still others squatted in clusters to rest their weary bodies and perhaps create a place of inner quiet amid the constant clamor of voices and vehicles: the shouting of rickshaw drivers, the roaring buses and cars with their constant honking horns. The dust and the exhaust fumes dulled the intensity of the sun’s brilliance but not its oppressive heat.

Many poor families were obviously making the station their home.  I saw women with their cooking pots, women nursing babies or playing with their young children.    Miraculously, it seemed to me that a spirit of peace some how dominated over the external chaos. I still hold a clear image of one young boy cradling in his arms and lovingly rocking an even younger child who I presume was his brother.

As I moved away from the station the intensity of the movement and the noise diminished somewhat as it flowed out into the various streets. In all the heat, the dust, the noise, the smells there were women moving with quiet grace in their bright saris, like brilliantly coloured fish swimming effortlessly and gracefully in this river of humanity.

As I approached the Home for the Dying, a former Hindu temple that had been abandoned in favour of a larger temple built just next door, I sensed an atmosphere of relative quiet in the surrounding street. Stepping inside I was struck by a tidal wave of human suffering.

In one large room there were rows of cots filled with sick and dying men.  A similar room next to it was filled with women.  It wasn’t long however before the extraordinary peace of the place began to seep into me.  This edifice was indeed still a temple where the presence of God was almost palpable.

When I wasn’t responding to the feeble cries from fever ridden men for “pawney”, water, I was carefully spreading ointment over the festering skin of those tormented with scabies. One morning for an hour or so, an eternal moment, I held in my arms a Tibetan man, gently stroking the parchment- like skin of his tiny skeleton like body, letting him know that he was not alone as he reached the end of his earthly pilgrimage.

Why was I a Catholic priest from the other side of the world given the privilege of shepherding this Buddhist in his passage into the fullness of  life?  For me it was a Eucharist moment with an echo of the words of Jesus, “This is my body given up for you.”

My strongest memory of these few precious days is not so much the suffering and the deaths but of one particular man by the name of John Rodriquez.  The Sisters had me attend to John because he was one of the few if not the only man there who could speak English.

Having held cups of water for him to drink and occasionally helped him role over on his cot from one side to the other, I took time just to squat next to him, hold his arm and listen to his story:

“Years ago I came to Calcutta from Goa. I have been living here in the streets for a long time.  A few weeks ago I woke up one morning unable to move my arms or my legs.  Some people brought me here to Mother Theresa’s.   I don’t know what happened to me and I don’t know what is going to become of me.”

Then his face lit up with a courageous smile and he said with such conviction, “But I know that everything is in the hands of the Almighty”.

That was many years ago, and I’m sure John that you are now with the One in whom you placed all your trust.  I can still see your great smile and hear your steady voice, and they challenge and encourage me in my own times of struggle or doubt to believe as you did that everything is in the hands of the Almighty.