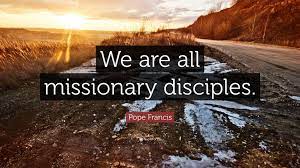 What does it mean for us to be Missionary Disciples?

“Only the person who feels happiness in seeking the good of others, in desiring their happiness can be a missionary”

In his exhortation ‘The Joy of the Gospel’, he explains that our faith calls us to be an active part of the world in which we live, not to be separated from it and not just to practice our faith merely within the confines of our own Christian communities.

He writes that being faithful means that we are ‘building in charity, a city based on relationships.’ (Lumen Fideii, no. 51).  That is why he continues to challenge us to be in the world if we are serious about being an active ‘missionary disciple.’

We need to realize that we do not exist in isolation.   As Christians, our work of evangelization will not bear much fruit if we are content to simply ‘go it’ alone!   Just as Pope Francis continues to tell us, we are all called to bring our faith beyond our Church walls and into the public arena.

As missionary disciples, we must endeavour to live and act in a way that gives witness to the Gospel itself.   And most importantly, we must do this with joy!

According to the United States Conference of Catholic Bishops, “The New Evangelization calls each of us to deepen our faith, believe in and go forth to proclaim the Gospel”.   And this is what we are called to do as missionary disciples.   Unfortunately, when we concentrate too much on the ‘talking’ about the faith, the ‘going out’ part becomes a mere afterthought!

Our desire to becoming sincere missionary disciples must change.   We need to ‘walk’ our faith and not merely ‘talk’ about it.   We are supposed to live it out through love, charity and actions as Pope Francis has often reminded us during his general audiences – “Words without witness are hot air.   Words do not suffice. “

He also continues to remind us of our need to ‘step out of our comfort zones, our church walls, neighbourhoods and communities’.   As missionary disciples, we are called to bring the message of Jesus’ love to all those around us.   In other words, we have talked about it long enough – now is the time for sincere and loving action!

One thing, with which I do struggle, however, is my own desire to be a missionary disciple of the Good News to not only others as encouraged by Pope Francis but also to be a true ‘missionary disciple’ within my own family.     This is a topic I have often discussed with friends.

As teenagers, some drift away while searching for their own identity.   Others drift into lifestyles that conflict with Church teaching and gradually lose their faith.   In my own situation, the changes began for my brood when they reached their teenage years.

Unfortunately, weekend part-time work, sport, and other commitments preventing their attending ‘Sunday Mass’ was just the beginning….    Adolescence and new freedoms then became an important and exciting time in their lives.

Yes,  I believe that it is becoming ever more urgent for those of us who long to become ‘serious’ missionary disciples to not only our family members, neighbours, friends, enemies, and the marginalized,  but most importantly,  to the young, who, as Pope Francis frequently and strongly emphasizes, want  ‘a church that listens more, that does more than simply condemn,’ a church ‘that needs to regain her humility’ and is ‘attentive to the legitimate claims of women’ while ‘not agreeing with everything that some feminist groups propose.

As we study Pope Francis’ words of wisdom, we will realize that they are not intended to be a ‘general summons’ but as a deeply personal invitation to each one of us.   We are each invited to embrace the gift and meaning of our baptism by our participation in the life of the church, and by our words and actions that witness to the transforming power of the Gospel.

To answer my own question – ‘What does it mean for us to become missionary disciples,’ I accept Pope Francis’ answer – ‘Only the person who feels happiness in seeking the good of others, in desiring their happiness, can be a missionary’.