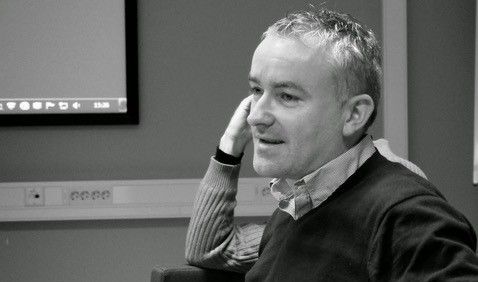 I stumbled on my first question: “Michael, Liam, Vincent, you, Patrick, Brian. I’m guessing you and your brothers are what we might call cradle Catholics?”

“What do you mean by that?”

How divided we can be even as we use the same language. I explained the North American usage of this term and Gerard Ryan, thankfully, laughed. “Oh, that’s called being Irish! And yes, you can take Catholic as a given.”

And we were off, in our conversation that would be about words and usage, and one in particular: accompaniment. From Tipperary in the south west of Ireland, Gerard Ryan, B.A., M. Div, S.T.L., D. Phil. is now a member of faculty teaching Political Theology at Regis College, the Jesuit School of Theology in the University of Toronto.

For two hundred years, generation of Ryans have lived in the same house in its very rural setting.

“Ireland was a difficult place in the 1950s, 60s, and 70s. There was extreme poverty even in the 1980s when I was growing up. Our story is the story of so many Irish families. Our parents worked extremely hard, had very frugal lifestyles, and put us all through college and university. They allowed the next generation to be trained professionally, in ways that they had hoped for themselves. My generation are the great beneficiaries of our parents’ real commitment and work, of the European Union, and also of peace in Ireland.”

And, yes, the Ryans were and are Catholic.

“We were a regular Catholic family in Ireland. We went to mass on Sundays. We prayed at home. I was an altar boy all my life. It was part of our culture. We didn’t stand out as different, as this can be the case in North America. It was part of who we were, as ordinary as working in the fields.”

“There were no religious in our family. I had no context for this. You entered without knowing much and I’m sure in some respects it’s much the same as a marriage. So, with a leap of faith, you enter. It was a very happy four years. I enjoyed the study, the fellowship.”

After those four years, Gerard turned to L’Arche and in 1999, spent a summer at L’Arche Daybreak in Richmond Hill, Ontario, and ended up staying the three years. Life as a L’Arche assistant is invariably a life changing experience.

“It was wonderful. I’d never met a protestant until I lived it L’Arche, and I didn’t know there was such a thing as female protestant priests until I went to L’Arche. This was a big eye-opener for me, you know. And the sense of community, how everybody was valued. I came from a very homogenized society and L’Arche is a very pluralistic culture in many respects, with people who come from all over the world and with very different cognitive abilities, gifts, and talents.

That must have been quite a cultural immersion!

“In L’Arche, especially at Daybreak, you kind of meet the world on one site. It was an extremely enriching, exciting, eye-opening time in my life.”

Gerard arrived three years after the death of Henri Nouwen. It was the community leader, Sr. Sue Mosteller C.S.J., who worked with him as his “accompanier” on matters of community. In addition, he sought formal spiritual direction, and this is how he encountered another first. The spiritual director recommended to him was the Jesuit ethicist, then at Regis College, Ron Mercier SJ.

“That was the first time I had met a Jesuit, I hadn’t had any interaction with the Jesuits previous to this, of any kind, shape or form.”

The combined influence of a Sister of St. Joseph and an acclaimed Jesuit academic was radical and transformative.

“I wanted to live priesthood in the context of community. After the communitarian life at L’Arche, religious life seemed the best context for a return to priesthood formally, and so I entered the Jesuits in 2002. I wondered whether I would enter the Canadian or the Irish province, as I would have been fine with either.

But you made a choice.

“In the end, I decided to go with Canada because when you enter, you enter a Society that is universal. You enter through a province, and this didn’t mean I couldn’t return to Ireland. As it was in Canada that I discovered the Jesuits, I thought this would be the best place for me to begin.”

Gerard Ryan sees the influence of L’Arche as fundamental in the development of “embodied” formation for priesthood. Listen to his explanation.

Given his rich experiences at L’Arche, I suggest that working as a diocesan priest was likely not going to be the outcome of his Jesuit formation.

“There are subtle differences. ‘Diocesan’ and ‘religious’ are nuances of language and possible identities in a minor sense that exist within our wider church. We all participate in the one universal mission to walk with people, to accompany them. That’s true for diocesan priests and it’s true for Jesuits. It’s important to remember that we all share in the one priesthood of Christ.

And there’s also a mission, yes?

“We are appointed to particular missions that help contribute to that universal mission. Those particular missions don’t mark us as different, they just identify the plurality of belongings that exist religiously within the church that we can often think are quite singular in their identity.”

“It is a spirituality that always tries to uncover within whatever situation you are in, the trace of grace, because the presumption is: this grace is already there and is not that we bring it. It is there, we recognize it, and we nurture it. I think that this is spirituality devoid of any clericalism, a spirituality that is not particular to us, even though we initiated the narrative around it. It really is spirituality for the Church, and for Christianity.”

Word by word, Gerard Ryan is clearing a path forward as he opens up the language of some fundamental Jesuit words: accompaniment, discernment, and spiritual direction.

“In my estimation, accompaniment is not about the Church walking with somebody, as if the church was leading somebody toward salvation. Accompaniment is about the full actualization of the person. Within the Christian tradition we would say that this would inevitably mean salvation.”

We should not think of this in individual terms, he tells me.

“We all walk toward salvation together as a community. If, as an institution, we only envision ‘accompaniment’ in professionalized, delineated terms – Who does what? Who is the recipient? Who is the giver? – then we are actually making a statement that says in some respects that, well, the Church is not a community of disciples and that we are not all walking together.

Then must always look beyond our own individual circumstances?

“I think accompaniment, first and foremost, must be qualified as mutual accompaniment, and we’re not there just yet. We accompany each other toward salvation. That means when I accompany someone, there is mutual conversion happening, mutual transformation happening for both of us. This is more than just a form of service we offer each other.”

Medieval manuscripts often have fascinating and surprising visual details in their margins. Here is an audio version of that as Gerard Ryan talks about the vital function of accompaniment as an ordinary daily practice of life, not as something in the pastoral “toolkit” when working with those in need.

Toronto is a long way from Tipperary. Where is home for you?

“Home is people. As you reach your forties, your circle of really close anchors is smaller, of course, but you tap into it with much more regularity, in distance and in immediacy. We Jesuits use this phrase. We say Saint Ignatius said it. Can that be verifiable without doubt? Probably not. But it is claimed he said that our Jesuit home is the world. For me that’s a little too much of an abstraction.

How, then, do you interpret that?

“My home is people, the people who have been so patient with my comings and goings, who have continued to say yes to being friends with me despite the interruptions of such friendships, be they family or friends because of my having to go to the next assignment. I would say the cross of that has not been carried so much by me, though I feel it obviously, but by other people and they have carried this with great ease and with great generosity, and I am very grateful for that.”

Gerard Ryan’s path into and through his vocation is uniquely his own and at the same time it is a broadly communal journey. Many of us are involved in these vocation journeys, even if we watch them from – dare I use the word? – the margins.

And so we come full circle in this series that began with Alan Fogarty SJ, followed by John McCarthy SJ, Kevin Kelly, SJ, Bill Robins SJ, and Gerard Ryan SJ, five individual routes into the Ignatian world. Each is a continuing journey that is being pursued with the witness and support of ever-expanding circles of family, friends, colleagues, associates, passers by, benefactors, critics, mentors, and the oddly curious. Those who do not take this journey for reasons of choice and those who cannot take this journey for reasons of gender, must nevertheless pay attention to it. So much depends on its success.