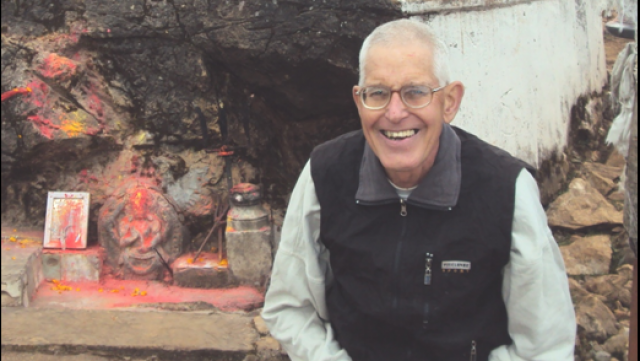 Mission is at the heart of the conversation: the mission, a mission, our mission, this mission. “I want to go to the edge, and from the beginning, that edge seemed to be a mission. I had my sights, at least geographically, farther away than Canada, but I was really happy to slowly let this thing grow. And here I am.”

Here is the Kathmandu Valley in Nepal, where now at 78, Bill Robins approaches something that might approximate retirement. We connect via Zoom in the early evening for him and the early morning for me in Ottawa.

Here are some brief excerpts from my much longer conversation with William Robins, “Bill” as he is known in the Jesuit community. He was born in Winnipeg in 1943. His father, a court official, was brought up in the Anglican tradition, his mother as a Catholic. In the language of the day, theirs was a mixed marriage and as was the culture of the day, a Catholic parent was required to promise that any children would be raised Catholic.

After four girls, Bill was the first and only boy in the family, and he was followed by a younger sister. The six Robins children attended Catholic schools – St Mary’s Academy for his sisters, and St. Ignatius and St Paul’s High School for Bill.

He says that any family opposition from his father’s loyal brothers “completely melted away” in time. “I only heard this later, but they were upset with this division between the churches. My father’s younger brothers and sister continued as Anglicans and that was fine, though this issue had to be resolved for my father to marry. I’m sure my mother would have married him had he continued to be an Anglican. But it was wonderful to see that he was willing to give up a tradition that I’m sure he loved in order to make a good family life.”

Bill describes his father as an introvert. “We didn’t have long conversations, but he was always supportive. We’d be fishing together on summer trips. My father was a great handyman and I’d be helping out. We’d be at a friend’s cottage, splitting a lot of wood and I’d be the piler of logs. We worked together. He was really fussy which meant I usually got to do the gopher work.”

The young Bill was an entrepreneur who wanted to become financially self sufficient.

Listen here to for the story of his newspaper round that help him finance his education at a time when Catholic meant that fees had to paid.

When the issue of a vocation surfaced, both parents were very supportive. Of all the early influences on his sense of vocation, he is especially thankful to the Sisters of the Holy Names of Jesus and Mary, founders of St. Mary’s Academy, and who also taught religion at St. Ignatius primary school.

“The sisters were a great influence, as were some pushy Jesuits. I was swimming with the current as I went into this, with a lot of support. I’m sure my father would have been disappointed, maybe, as I was the only boy in the family. But that was not a big deal. He was giving me the freedom to do exactly what I thought was best.

“Of course, my mother was thrilled with the idea. But there were no long conversations about this. Certainly, I had to get their permission and they readily gave it. This was the same with my sisters, as they each found their own way in life. They were treated in a similar way. My parents would never get in our way.”

In 1960, when he entered the novitiate of the Society of Jesus, the idea of eventually assuming the leadership of a parish was not part of the plan.

“Without pushing, always in the back of my mind was an interest in mission life. I wanted to go beyond the borders and do something that maybe I was able to do and that other people weren’t. And with a lot of support, it worked out that way.”

With a focus on science and mathematics, but relatively little teacher training, like many young Jesuits, he found himself standing in front of classes of high school students. Then, in 1971, the year of his ordination, everything changed when he joined the Darjeeling Mission in India. With the exception of the year he took his final vows, 1976-77 which he spent in Canada, Bill has lived and worked in Jesuit missions in India, Bhutan, and Nepal.

Bill tells a dramatic story of his expulsion from the model school where he was teaching in Bhutan. This was at the height of President Indira Gandhi’s clampdown on foreign influence during what was known as the “Emergency” era in Indian politics.

Bill’s return to Canada in 1976 turned out to be a brief interlude before he returned to missionary work in Nepal, where he has been teaching ever since.

“People talk about retirement, but the challenge for me now is to accept slowing down. A simple example of that is the recent conversation I had with my superior who said, ‘You’ve got to stop using that bicycle.’ He was 100% right! Though I love riding a bike. As a kid, back to my sense of independence, my father was going to buy me a bicycle, but I’d got enough money to buy my own and I did. And I took good care of it. We’d ride all over the prairies.

He tells me how important bikes are:

“In Jesuit communities there’s always bike around, and here in Kathmandu they are so handy, but my superior is right, my balance is not like it used to be and so I have now given up the bicycle. We are all slowing down, and I for one, and I suspect most of us, don’t like to admit that. But that’s the beauty of Jesuit obedience. I won’t get back on that bike.”

“I am also slowing down at teaching and this is probably my last year of formal teaching. We are just wrapping up the school year here, a little late because of the pandemic. I’m going to start counselling at our other school. We adjust to the change because there’s always something more to be done. I get things done even without that stupid bicycle, even though it takes a little more time!”

He laughs when I suggest he probably advised his aging parents in the same way as his superior when they were his age.

“My father taught me at the end of a conversation, no matter what happens, we part as friends. My mother’s influence was much more proactive: ‘Be upfront. Keep smiling. Don’t be glum.’ My mother I’m sure had lots of worries, but she was always going to jump in there and get the job done. I hope I managed to pick those traits and skills from her. My sisters are also the same. We all enjoy going out there and getting things done.”

The final piece in this series is with Gerard Ryan. He tells us, incidentally, that it really is a long way to Tipperary, but more importantly, he presents Ignatian spirituality as essential not only for the future of the Church, but also for Christianity.