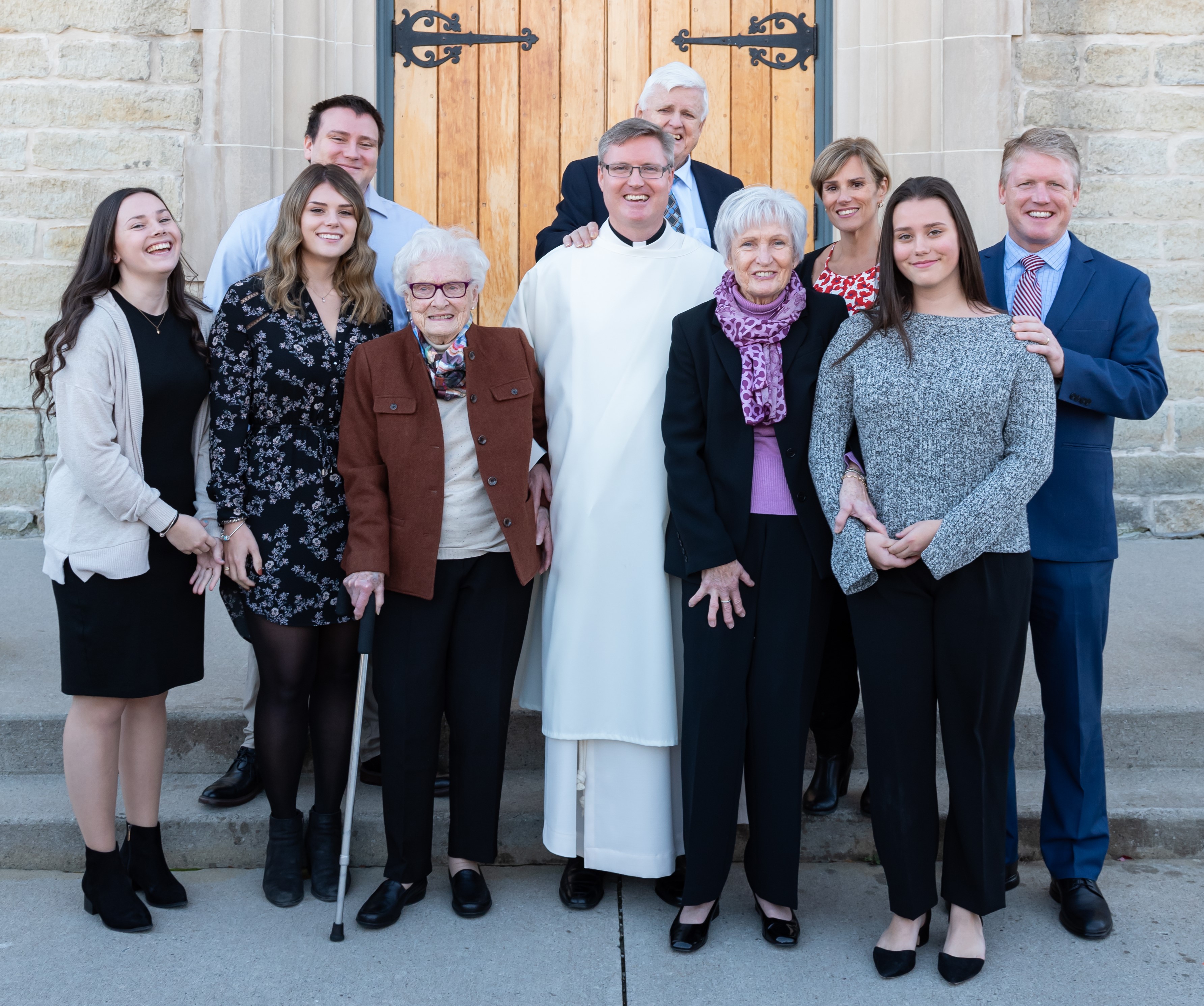 Kevin Kelly did not use the word genetics, but he does admit to two strong personality characteristics that he traces back to his parents: strategic thinking from his father and energetic drive from his mother. “I love mapping out a possibility. I’m always looking at plan A, B, C and D. What Ignatian spirituality has taught me is that a lot of this is discernment, giving up my will, in a sense and discerning where am I being called.”

Close to his first anniversary as an ordained priest, Kevin Kelly is focusing on what he calls his vocation within his vocation: spiritual direction. He spoke to me from Villa St-Martin in Montreal, where is the executive director.

his is an especially timely series in light of the recent letter sent to every Jesuit by their Superior General, Arturo Sosa SJ. His letter is an appeal for collaboration and help in attracting “new companions for the future to which God calls us.”

Here are some brief excerpts from my much longer conversation with Kevin Kelly, who had a highly successful professional career with an international pharmaceutical company before entering the Jesuits a decade ago at the age of 40. Our conversation about his family began with his younger brother, Paul, who lived with Down syndrome and who died in 2019.

“When you grow up with somebody like Paul, there’s such a sense of responsibility and care that is needed because often people with disabilities need more of that care. As a family member you just naturally pick it up. He was an incredible spirit, full of energy and love and always the centre of every room – the light of the party. He created a new reality for us by the nature of who he was. He truly was at the centre of our family. Every time I think about ‘family’ it is Paul who comes to mind.”

He taught you some important things.

“You know, I look back with nothing but gratitude for that because it shaped me in so many ways. As a kid it was always a worry that Paul would outlive us or that he would somehow suffer in a way, and that he wouldn’t have anyone to care for him. In the end, it was exactly the opposite. There were well over 2,00 people at his funeral.”

Kevin’s older brother, Sean, is a school principal in Ottawa. “We grew up so close that we have the same memories, the same experiences. We can short-cut the language. We only chat every one or two weeks, he’s busy in his own life, but we are very close, though we have such different lives.”

“Up to the age of 20, I could count on one hand the Sundays that I missed mass. It was community. I loved church because the people there were our neighbours, the kids that we played with. EVERYBODY was Catholic, except for that one family that wasn’t! It was very 1930s, ‘40s, and 50s, yet this was the 1970s and 80s. Church was our family and the community. We certainly prayed the rosary and those sorts of things, but we really didn’t struggle with interpretations of Catholic teaching. We weren’t debating issues or grappling with theological points.”

What we you doing, then?

“We were a busy family, caring for Paul. That was the focus. Church was a place to go and worship, for sure, but it was mainly a place where communities and other families came together. There was a huge social element to it.”

It was when Kevin was 21 years age that the first rumblings of a possible vocation began to sound, though distantly in the background.

“It was Sean who was going to be the priest. I remember when he started talking about it. He is a kinder, more patient person so this was never a surprise. But he quickly realised that he did not have a vocation. The first time I thought about, it terrified me. I was at university and I thought no way am I doing that, and I started doing deal-making with God.

“I thought: If I graduate, get through studies, if I get a good job then that’s all the sign of what I really need to do. It was only as a much older adult that I realised the things that were creating fear in me around a vocation. I guess you grow up and you see all the things you didn’t like, and that still maybe exist, but you also realise that there’s nothing that I love that I don’t also have frustrations and challenges with. Nothing is 100%, even at the pharmaceutical company I worked at.”

Tell me about that.

“I loved that experience, but as I grew older it went from being perfect to being not perfect. Yet I still loved it, and I got so much out of it. Still, it was there that I was finally able to make that leap to the church, where I’ve always loved it, and where I’ve also had frustrations. At that point in my life, the frustrations were no longer as big, and I was much more able to embrace who I was and what that vocation would be at that time.”

What did Sean and his parents think?

“Well, Sean was not that surprised, my mother was rock-solid supportive, and I knew that dad would be the one to say, ‘I knew this was coming.’ Dad, I think, had an insight that was both supportive and helpful. He was lawyer, so I think I get my strategy side from him. Ours wasn’t always the easiest relationship, as they rarely are. It’s hard to see, now that he has dementia, that what was so much part of him is not there in the same way.”

What are you learning from this?

“He teaches me to not count on the gifts that I have now because they are not always going to be there. Dad is going to be living for a long time without those skills and it’s hard to watch, though there’s something wonderful in it, too. The humility that he’s learning.”

For ten years, Kevin was responsible for a team of 600 people as a senior leader in an international pharmaceutical company based in Zurich. It was there that he finally acknowledged the vocation that had been trying to gain his full attention for so many years. To hear the story of how his staff reacted to his decision, click here.

As he tells that story of the reaction of his staff in Switzerland, Kevin makes a link to Fratelli Tutti, the encyclical of Pope France which talks about the concept of the culture of encounter.

‘Life, for all its confrontations, is the art of encounter.’ I have frequently called for the growth of a culture of encounter capable of transcending our differences and divisions… Each of us can learn something from others. No one is useless and no one is expendable. This also means finding ways to include those on the peripheries of life. For they have another way of looking at things; they see aspects of reality that are invisible to the centres of power where weighty decisions are made. (Fratelli tutti, 2020, paragraph 215)

This spirit of encounter is at the heart of Kevin Kelly’s vocation within his vocation. In a way, it contains echoes of that initial experience of church as the embrace of an entire community in his youth. Now, the composition of that community is far more expansive, diverse, and needy than anyone might have imagined.

What, then, is that vocation with a vocation?

“Encouraging mutuality, equality, how we share, how we listen – that I love – as is discovering that this is my path within the Jesuits. Communal discernment is fascinating to me. One-on-one spiritual direction is very interesting, but I am more intrigued by group dynamics, this communal conversational model with people who are homeless or struggling with addiction.”

And this is why Villa St-Martin is such a good fit?

“That’s what I love about what I do here in Montreal. My vocation within my vocation is around the spiritual, and I think it is around the communal side of spirituality: how we are closer than we think, spiritually, if we can just get together as humans.”

Next in the series, from Nepal, William (Bill) Robins talks about the centrality of mission.