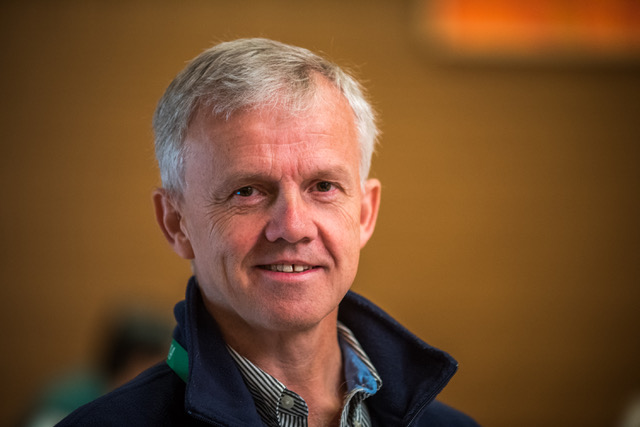 He calls it a vocation of reconciliation, a reconciliation with the natural world. “There’s not the sacred world and the so-called a secular or profane world. There’s only one world.” John McCarthy wants to offer bridges to anyone who thinks there might be such a separation. He is an expert in trees and soil science and is currently a visiting scholar at Sudbury’s besieged Laurentian University. Our interview was not an interview about instability in Ontario’s higher education system, but about his family.

Here are some brief excerpts from my much longer conversation with John McCarthy. He reminded me that when you grow up on an island, you not only learn to have profound respect for nature you also keep a careful watch toward the mainland.

“I grew up on the edge of the north Atlantic and I’ve always had this sense of the horizon. I think that when I was a young boy I always used to run after rainbows, to try and find the end of the rainbow, and I would just end up with skinned knees. I think I’ve always been doing that, pursuing the end of the rainbow, and always looking out to the horizon in some way. That’s hard now I’m in Sudbury, but I still find my ways.”

John McCarthy is oldest of four children. He has two younger brothers and a sister. All were born two years apart. Of the four, he is the only one who no longer lives on the island. He was also the first in his family to go to university. Like many Irish Catholic Newfoundlanders, the McCarthy children grew up in a decidedly Catholic milieu, taught by nuns, Christian Brothers, and other priests. “We were steeped in a Catholicism that was always inviting and open. It was intrinsic to who we were. It was just part of our skin.”

It came as little surprise when one day, at the tender age of 12, John informed his parents that he wanted to be Christian Brother. Then the next day, he told them he had changed his mind. Grounded in their faith, his says his parents were encouraging and supportive, either way. “They were always very proud of me, as they were of all their children. There was strong family support and strong cultural support as well.”

Although a seed of possibility of religious life had been planted somehow, he would be 25 years old and in possession of a master’s degree in soil science before the route of his vocation as a priest and Jesuit became clear. “I don’t remember it as being a big thing for my family, they were just supportive and always encouraging.”

He was ordained in 1994 and as traditional parish work was not part of the plan, he continued his studies of the natural world.

“I love the image of the iceberg. Growing up in Newfoundland I have a long experience of icebergs and the relative densities of ice and sea water. Most of the iceberg, 98% of it, is under water. I think I’m trying to get at that 98%, somehow, in understanding creation. I studied forests, and trees and lichens, but there’s a whole other world of beauty and of meaning and goodness and creativity under the veneer of what we normally deal with. I think this is what my vocation of reconciliation is: to engage that world in some way.”

As a child, whenever he wrote his name and address in an exercise book or a letter, he included details that reached far beyond Newfoundland. Occasionally, in later years, some journeys would involve one-way or dead-end streets, as he explains here.

John McCarthy says it was from his father that he learned to appreciate nature. “We spent a lot of time in the outdoors, fishing, and he was a great fly fisherman. I got my love of the outdoors and nature, for sure, through him.”

When John’s father died a few months ago, like so many people in this past year, the only way to attend the funeral was via Zoom.

As for the specific call to become a Jesuit, he points to an influential book he read early in his vocation journey, William J. O’Malley’s The Fifth Week.  John McCarthy about that decision here.

I note that twice in this clip, John mentions another Jesuit scientist, Teilhard de Chardin. In his 1961 book, Hymn to the Universe, de Chardin wrote: “May the universe offer to our gaze the symbols and the forms of all harmony and all beauty. I must search: and I must find. What is at stake, Lord, is the element wherein you will to dwell here on earth. What is at stake is your existence amongst us.” (emphasis in the original)

In John McCarthy uses his own words to capture this urge to search and to find: “It’s looking into the heart of the world and seeing how fully graced it is, and trying to reflect that somehow, and in particular focusing on creation.”

And we’re back at the image of the iceberg, where 98% of this creation is in layers that we have yet to see and interpret for ourselves.

Next in this series, Kevin Kelly describes his journey from international pharmaceuticals to working with the complex dynamics of discernment.