A Thorn in the Flesh – Fourteenth Sunday in Ordinary Time 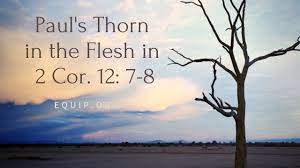 Saint Paul today offers us his famous line about a thorn in the flesh.

Paul pleaded with the Lord that he would be freed from this thorn. It is in that context that we hear God’s statement, My grace is sufficient for you, for power is made perfect in weakness. Paul goes on to state that he will boast of his weaknesses, so that the power of Christ may dwell in me  … For whenever I am weak, then I am strong.

Like so many of us, Paul had some life situation that prevented him from becoming too proud. I’ve always wanted to know more about Paul’s thorn. I am consoled that knowledgeable scripture scholars are also in the dark. They ask whether it was psychological or physical. There is some speculation that Paul is alluding to the hostility coming from with the Christian community.

My own personal theory is that Paul was probably humbled by his history. He experienced a major conversion that caused him to shift from being one of Christianity’s greatest persecutors to being one its greatest proponents. I’m sure that that alone is humbling. But Paul probably experienced many believers who still had strong feelings about him and his earlier persecution.

Paul was susceptible to pride and arrogance. He probably pondered his contributions and gave himself credit, or even compared himself to others and felt that he was doing a better job.

My experience of ministry is that it is very easy to give credit to myself for the service I offer. That can easily lead toward pride. Look at what I have achieved! It is essential that I constantly remember that good things are happening because God is acting through me and my abilities.

That takes prayer and gratitude. I can point to several thorns in my life, both physical and psychological. They serve to remind myself to not get too proud. I am all too aware of my weaknesses and imperfection. Saint Paul, like all of us, needed a constant reminder of his own humanity and weakness.

My sense is that Jesus was well aware of the thorn in his side. He knew his personal weakness. Think of the Letter to the Hebrews and the references to weaknesses. Jesus’ personal knowledge was probably strengthened by his time in the wilderness. Later on, he was able to teach with an authority that came from being tested.

He knew what it was to be weak and to be tested. He was able to help so many women and men because he knew what they were going through.

We hear about the weakness of Jesus in today’s Gospel from Mark. He was in his hometown. Many were astounded. They knew who he was. Thus, they took offence at him.

And Jesus could do no deed of power there. Oh! He did a few things. He laid his hands on a few sick people and cured them. But, compared to other places, he did not do much.

Being July 4th, this is Independence Day in the United States. The writers at igNation keep our American readers in prayer. May you walk in the freedom that is offered by Christ.