Kateri Tekakwitha – Lily of the Mohawks 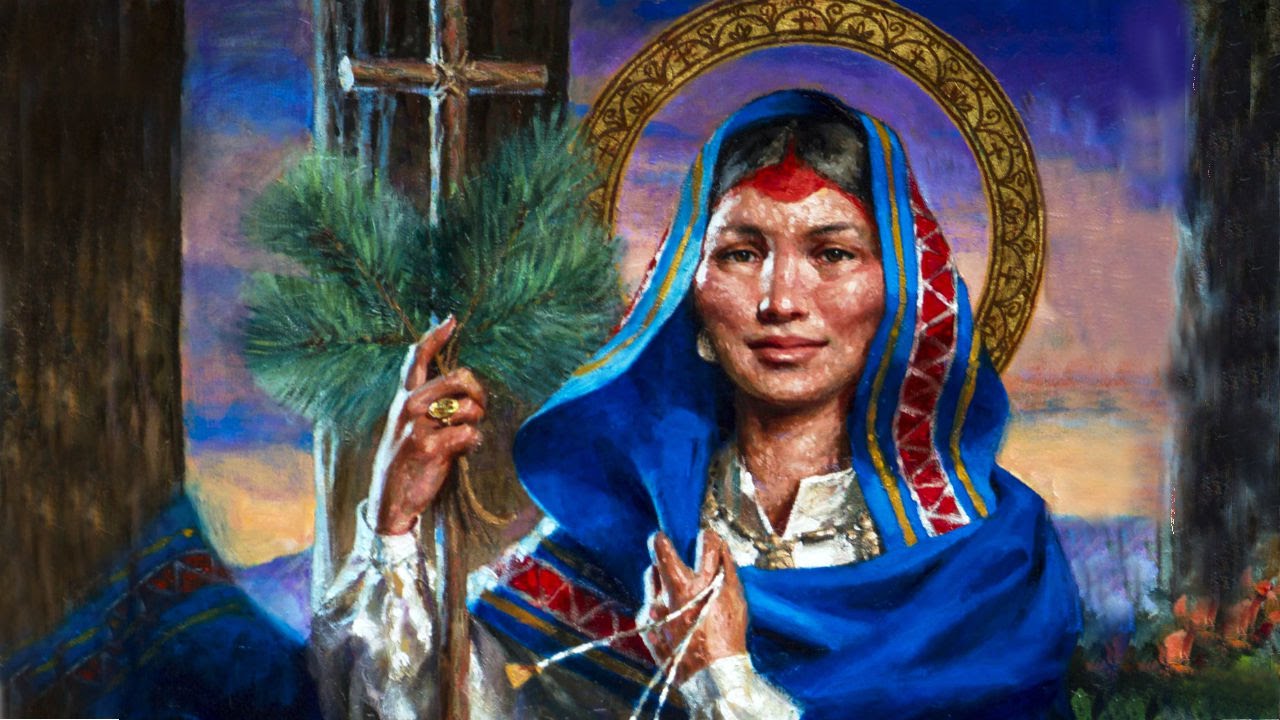 The feast day of Saint Kateri is celebrated on April 17.  igNation marked the day with a special post from Philip Shano, SJ and a poem/prayer from David Shulist, SJ

The Lily of the Mohawks, patron of Native Americans, patron of ecology, ecologists, and the environment – Saint Kateri Tekakwitha has several other titles and patronages – quite an achievement for a young woman who died when just 24, a baptized Christian for a mere four years.

Tekakwitha, a name meaning one who puts things in order, was born to a Christian Algonquin mother and a Mohawk warrior father in 1656 in upstate New York along the Hudson River, near present-day Auriesville.

When she was four, smallpox swept through the village. She was left weakened, scarred and partially blind. Both parents died in the outbreak. Her two aunts and uncle, the chief of his clan, adopted Tekakwitha. She spent her time with chores and playing with other girls in the village.

Tekakwitha’s uncle usually disliked the Blackrobe and his strange religion, but he tolerated the presence of Fr de Lamberville, a Jesuit missionary. The chief’s niece was baptised at the age of 20. It was at her baptism that she took the name Kateri, in recognition of Saint Catherine of Siena.

Members of Kateri’s tribe did not understand her strong interest in religion, treating her as an outcast, acting with hostility and even threatening her life. So she fled on a dangerous journey through the wilderness, heading for an established community of Native American Christians in Kahnawake, just south of Montreal.

She lived a life dedicated to prayer, penitential practices, and care for the sick and aged. In 1679, Kateri took a vow of chastity. Her motto became, Who can tell me what is most pleasing to God that I may do it?

The villagers felt close to God when Kateri spoke about the life of Jesus and when she prayed.  Some said that her face became full of beauty and peace, as if they were looking at God’s face.

It was in Kahnawake that she died on April 17, 1680. Within a short time there were references to her saintly and healing powers, partly because her disfigured face miraculously cleared. Three hundred years after her death, on June 22, 1980, Pope John Paul II beatified Kateri Tekakwitha, the first Native American so honoured.

At the ceremony, he spoke of how Kateri stands before us as a symbol of the best of the heritage that is yours as North American Indians. While singling out her unique role for Native Americans, he stressed that Kateri is offered as an example for the whole Church. All of us are inspired and edified by her complete trust in the providence of God and encouraged by her joyful fidelity to the Gospel.

The Pontiff pointed out Kateri’s solid faith, straightforward humility, calm resignation, and radiant joy, even in the midst of terrible sufferings. Her gravestone describes her as the fairest flower that ever bloomed among red men.

Pope Benedict XVI canonized Kateri on October 21, 2012. That was an answer to the prayers of many people. It brings us a saint who holds a special place of devotion among the indigenous peoples of Canada and the United States.

That devotion has resulted in Native American ministries in Catholic Churches throughout both countries. Let us pray to Saint Kateri, that she may intercede for our First Nations brothers and sisters who suffer so much poverty and injustice.

(2) Prayer for the young and our families, with Kateri~

O most humble Kateri
I seek your love and prayers.
I turn to you for your inspiration.

May I know the power of humility;
the strength of seeking God’s will
in everything I do this day;
the compassion to care this way
for those who are weak and are in need of help;
and the faith to forgive
those who walk a hurtful and violent path.

Pray with me Kateri
that through us God our Creator
will comfort the orphan,
watch over the neglected child,
and wait with the youth who go astray.

You lost your parents
and found others along the way
to care for and guide you.
May all parents and grandparents stay healthy,
seek the selfless love of Jesus,
and give where giving is most needed.
May they make wise decisions
and heed daily to the Wisdom of the Great Spirit.

Your spirit was strong
and your love for Jesus is deep,
may I trust that Christ will turn my weakness
into His strength and meekness;
so that whatever comes to me this day,
I may choose to do God’s will.
Amen

Fr. David Shulist S.J. has many years of experience in working with young adults, especially on university campuses. He is presently the Director of Spiritual Services at the University of Sudbury, the Jesuit university in Sudbury, Ontario