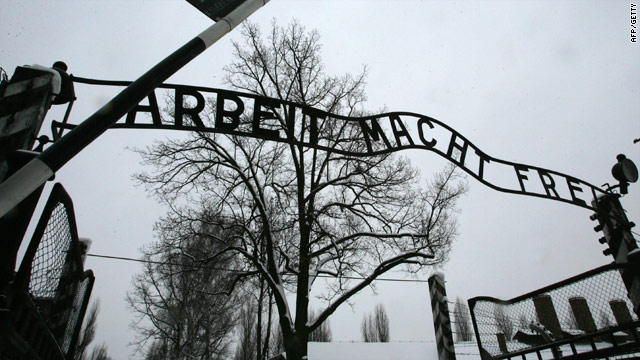 Eight years ago I visited Auschwitz concentration camp in Oswiecim  Poland. The notorious nazi death camp is only an hour and a half drive from Krakow where John Paul II  was archbishop before becoming Pope. In 1979  he called this camp “The Golgotha of our times.”

No words adequately describe the desolation I experienced the afternoon I visited this horrific place. Before going I had seen photographs of the infamous gate with “ Arbeit macht frei – Work sets you free” above the entrance. I was surprised that the camp consisted of several buildings.

But what surprised me the most was the barracks where some male prisoners were housed, who were working there before they died either from malnutrition, pneumonia, or dysentery due to the cold and inadequate conditions.

To see these huge rooms with bunks piled up in rows with three bunks above one another, no mattresses, made the living torture the prisoners experienced palpable.

Another fact I didn’t realize before going was the other camp close by, Birkenau, where even more Jews were gassed. The camp was designed with the gas chambers below ground. So across several fields there are small metal chimneys sticking out of the ground.

Apparently it was designed this way so that allied forces could not see the gas chambers from air surveillance. Before going I  had seen photographs of the ovens used to cremate the bodies, so that somehow was less shocking.  My standing in front of the actual ovens used to burn the bodies of men, women, and children, for no other reason than their Jewish identity, was painful.

Auschwitz is part museum, and part sacred temple to the memory of the innocent at the hands of merciless killers. Two images moved me profoundly. First, seeing the impressive family home of the camp commandant Rudolf Hoss who lived there with his wife and children, immediately outside the camp fence. I thought, how could they live there and be at peace with themselves?

Second, and my reaction surprised me, was the cell where St. Maximilian Kolbe, a Polish Catholic priest and Conventual Franciscan friar was held, before he was shot. He  volunteered to take the place of a stranger who was chosen to be executed in place of a prisoner who escaped..

A paschal candle was burning in his cell the day I visited. I very strongly felt God’s presence in front of that cell and burning candle. As a Catholic, I was very moved by the image of Resurrection which the Paschal candle brought to mind.

Pope John Paul II declared Maximillian Kolbe “The Patron Saint of our difficult century.” All these people I thought, now share in the mystery of life not ending upon the death of the body.

While there, I remembered a Jesuit priest who preached  a retreat I attended years before. He served as an 18 year old American soldier who was captured in Germany a year before the war ended.

As a prisoner of war himself, he said he was in the yard with other prisoners when someone committed suicide by throwing themselves at the electrified fence. Someone yelled: “where’s your Christian God now?” Another prisoner pointing to the dead body on the fence answered: “There He is.”