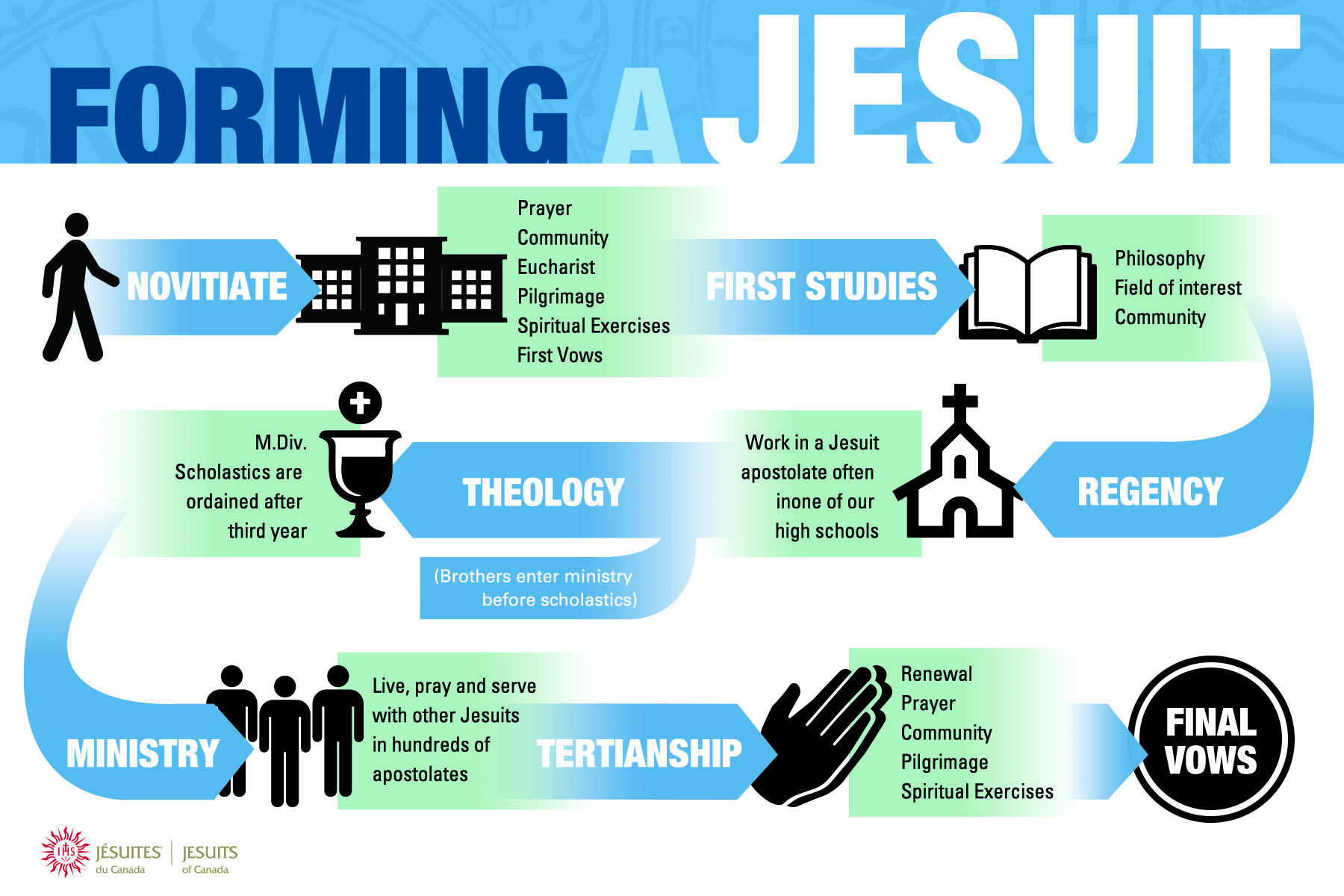 Sixty or seventy years ago we were blessed with many novices and young religious in formation.  Some of us of a certain vintage can remember these “good old days”, but they are gone. As coordinator of the Inter-Novitiate programme of Montreal I know this from a unique vantage point.

There are about 140 religious communities in Montreal. A good  programme is organized each year, and well advertised, but for how many novices? This year four. How many of them were born in Canada? None. Most are novices from other provinces of their congregation who come here for their formation.

And the Canadian government is putting more and more obstacles in their way. How many are in the Jesuit stream? This year none, but usually from two to four, at least at the beginning of the novitiate year.

Statistics on novices in Canada are not readily available. The website of the Canadian Religious Conference tells us that there were 40 novices in 2014, and certainly fewer today. For decades novice entries were unable to stem a drop in total numbers (priests, brothers, and sisters) from 55,180 in 1975 to 12,220 in 2018.

Likewise, the Jesuits in Canada dropped from a maximum in the late 60’s of about 1350 (including English and French Canada) to 224 now (a sharper drop but in a longer time span).

In 2014 about half of religious were 80 or over. The proportion has likely increased since then. In recent years some dying communities have moved to retirement residences. For many years they have not received new novices, and do not plan to do so now.

In the light of all this, is the Internovitiate programme worth it? Yes. These few novices, if they persevere, have a key role to play in the Church, and they need to work in synergy, as friends in the Lord, keenly aware of the complex and challenging context in which they are without exception called to serve. Those who persevere, and this includes older candidates who have been through the ups and downs of life at a time of dormancy in the life of the Church, are promising signs of hope.

Over the centuries religious communities waxed and waned. Most waned to the point of dying, others managed to pick themselves up, strengthened by the crises they faced. The first generation of religious communities struggled, dealt with unexpected obstacles and challenges, and many of them if not canonized were recognized as persons of heroic virtue.

Likewise the last generation of a dying community requires leaders, heroes as well, who prepare their community and its members for their death, in total readiness for God’s will as it unfolds, who strive to make available to the Church at large  the charism of their founders. And indeed religious  who continue the struggle today in a time precarious and ambiguous for the Church need inspired and saintly leaders to help them move into a future yet unknown.

Are there factors that point to life or death for a religious community? Here are some suggestions:

✦ Some communities had a mission that was too precisely crafted, and were not able to make changes when their mission was no longer relevant or useful, so they declined and died a natural death. Others had a more broadly based mission, and adaptations were easier for them and they worked. Still others had visionary leadership and they were able to go back to their original charism and develop alternate ways of being faithful to it.

This is a key issue for so many communities in Canada, and especially in Quebec, that were very active in education, social service, and health care, which governments have taken over. They are seeking to reframe their mission in conformance to their original inspiration, and thus far they survive.

✦ Does the age of a community have anything to do with their survival? Many older communities have come through many tribulations over the centuries. They have developed a clear spirituality, a flexible apostolic thrust and an attractive way of life. Their leaders can depend on centuries of accumulated experience.

Right now more recently founded communities have received enthusiastic young people to respond to the needs of today. In some cases this is a wonderful sign of hope; in others leaders have been deficient and abusive, in yet others inexperienced, thrusting their members into action without a clear sense – which older communities have – of the required prior formation and clarity of mission.

Ultimately the issue is not the chronological age of the community: every community needs to have access to both the wisdom that has come down through centuries, and to the energy of youthful members ready to strike out in new directions, foregoing the comfort of standing pat, which is like a daily tiny drop of embalming fluid that would eventually do them in. French has a phrase describing their challenge: “rouille ou grouille”: keep moving or be encrusted by rust.

✦ This points to the crucial role of formation. Balance is essential: to offer our young members the treasure of the best traditional values and wisdom forged over centuries of Church and community, but also to teach them how to shift gears, to encourage them to explore, innovate, discern, reach out to a world that needs the Gospel more intimately and profoundly than ever before.

✦ Will our best be good enough?  Stepping out into an unknown future is risky, but we do not do so alone. We are collaborators, and we have collaborators. We are collaborators with God. Through Christ God gives us a mission to evangelize, to heal, and we count on an Energy way beyond our own as we face the massive decline of our communities and the struggles of our world.

Our prayer makes us open to action energized by God, and our action drives us back to a prayer that asks for even more energy from Him. Prayer and contemplation are essential to all religious life,  but for some communities it is a principal occupation. They are the hidden strength that allows us all to move forward.

We have collaborators. Some are attracted to fully join us, but others want to learn from us how we pray and to become our partners in mission. A whole new dimension of religious life is in the making. We are on the cusp of a multiplier effect. Let us not get in the way.

✦ Even if there are precious few of us left, let us remember that at one time our forebears – a handful of pioneers  – were also few, scant in resources and in settled ministries. Where were they to go, what were they to do?

Putting their gifts, their desires, their freedom at the disposal of the Lord, they were able in relatively short periods of time to create ministries that the Church keenly needed. They attracted many young men and women to join them. What is to stop us from becoming pioneers again?